Bratislava: the European Capital City No One is Visiting — and Why You Should! 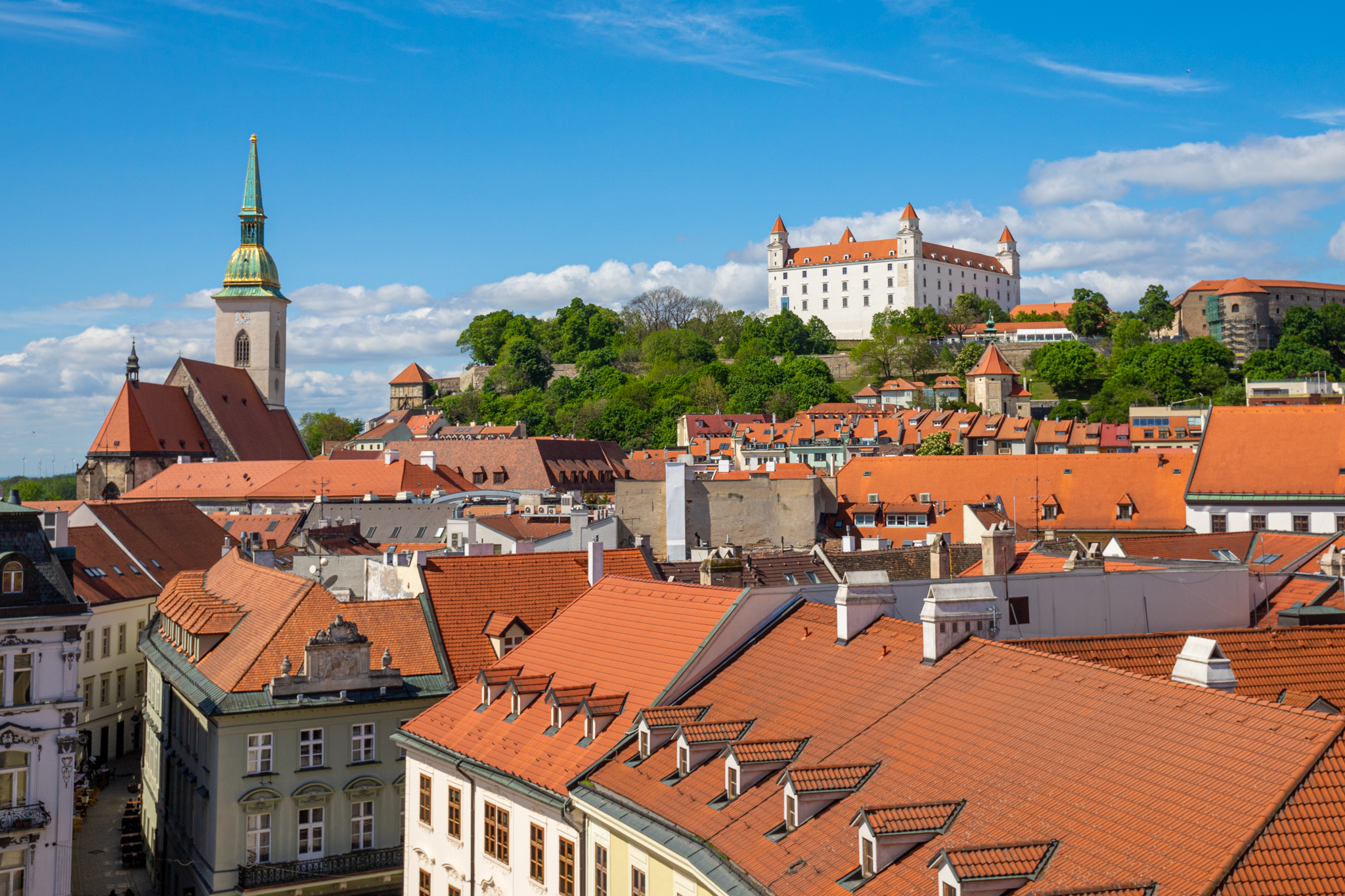 Because I spend so much time researching and planning my travels, it is rare for me to feel surprised by a destination. Most of the time I prefer it that way, but every now and then I like a good surprise. Most of the time when I am surprised it is because a random destination will appear on my itinerary. Perhaps because it was too close to pass by so we add it last minute, or perhaps a fellow traveler recommended it on a whim.

Regardless, I find myself booking the visit with little research, ready for an adventure, and that is exactly what happened to me in Bratislava, Slovakia.

During my multi-city trip through central Europe, my husband suggested that we stop in Bratislava for a night or two after a friend of his mentioned it was worth visiting. Sam was looking at it on the map and said “why not? It’s so close to Vienna and we’re already on our way to Budapest. Let’s check it out.” A few clicks on AirBnb later, we booked an apartment and local food tour, and we were off.

Only 90 minutes by train from Vienna,  Bratislava is the charming capital city of Slovakia which is often overlooked on central Europe itineraries. People more frequently visit Vienna or Budapest, but after visiting, I can confidently say that it would be such a shame to not spend at least 24 hours (if not 48 hours) in Bratislava. This is the most underrated city in Central Europe which no one is visiting, and this is why you should consider adding Bratislava, Slovakia to your next Europe itinerary!

It took less than an hour for Sam and I to become enamored with Bratislava, especially after a mediocre visit to Prague. To me, Bratislava seems like what Prague used to be like before millions of people “discovered it”. This feels like a humble city, proud of its roots and its quirky identity.

Compared to its sprawling neighbors, the compact old city of Bratislava is tiny and heavily restored. You’ll feel like you’ve been transported back in time to an authentic central European capital, in a way that I didn’t experience anywhere else on our trip. Of course there are still little tourist shops in the old town, but they are non-obtrusive and you won’t be heckled on the street by people trying to sell you plastic gimmicks like in Prague or Vienna. 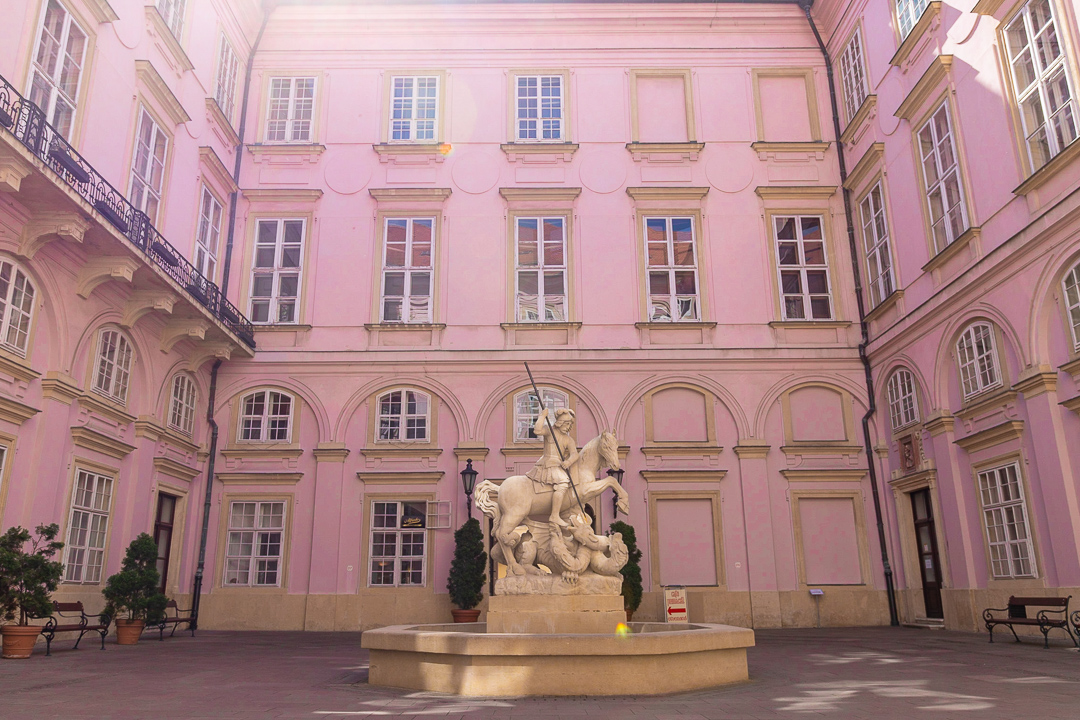 With the somewhat-recently rebuilt castle presiding over the pastel-colored old town, there is something delightfully whimsical and picture-perfect about Bratislava. It is just a charming place, and that was one of the best parts of our surprise visit to Slovakia. It is a city that offers everything that I expected from a central European capital but with a surprising assortment of trendy coffee shops, affordable luxury restaurants and cutting edge independent boutiques.

The best part of Bratislava though? Very few tourists.

Most people couldn’t pick out Slovakia on a map, let alone name its capital city.or the foreseeable future, Bratislava is likely to remain a lesser known destination in Europe — which is why it is the ideal time to visit! This unique central European destination is the perfect place to go if you want to feel like a local and be charmed by the beauty of Central Europe.

Bratislava is an ideal city to visit for any travelers seeking something a little different. It is a budget friendly destination in Central Europe that will give you a break from the big crowds and frenetic vibe, instead offering a calm and humble experience.

What to Do in Bratislava, Slovakia in 24 Hours

Like many of the other cities along the Danube River, coffee is a deeply important part of the daily culture of Slovakians in Bratislava. Trendy and stylish coffee houses are opening up all around Bratislava, so much so that the New York Times summed up their favorite spots around Old Town. Always in search of the most hipster coffee shops in a city, I was all about it.

Ever heard of a Selfiecchino? I hadn’t either, but the clever owners of Cafe Five Points knew how to get their business noticed — print the customer’s “selfie” in the latte foam. This takes latte art to a whole new level! Urban House’s sprawling Old Town location was full of millennials sipping on a specialty seasonal latte while working from their laptops. Their food is tasty too! My favorite Bratislava coffee shop however was Fach, which we managed to visit three times in a  48 hour period. Their perfectly prepared espresso drinks are made from freshly roasted beans, and their stylish minimalist interior offers a calming ambiance. Along with coffee, this bistro and juice bar bakes fresh sourdough bread and pastries daily, making it one of the best brunch places in Bratislava.

The pastel colors and well-preserved architecture of Bratislava’s Old Town will captivate you at first glance. The compact Old Town is very easy to walk and with minimal crowds during our visit, it was quite pleasant to just leisurely meander about. You could reasonably see most of the important sights below in 2-3 hours at a calm pace. I would definitely recommend going up at least one of the main city towers in order to get a view of the Old Town area.

The Old Town of Bratislava runs directly along the Danube River, which has served as an important thoroughfare for this region for centuries. On a sunny day, the riverwalk is quite a lovely experience, and you’ll see many Slovak people simply relaxing on a bench and people watching. Grab a hilariously large ice cream cone at Luculus Ice Saloon (see photo below) before starting your casual walk on the Danube. Head east along the waterfront first, then cross at the Old Bridge, before making your way back towards the next stop on this 24 hour itinerary in Bratislava.

In a quirky design choice compared to the rest of the city, the shiny silver UFO Bridge stretches across the Danube River as a modern architectural wonder that looks dropped into Bratislava by some foreign aliens. Before heading to the top of the bridge, wander over to the Slovak Radio building on the south side of the river, which has been named one of the ugliest buildings in the world in a brutalist, communist style. It is quite… something.

At the top of the UFO bridge, there is an observation deck as well as an upscale restaurant with stunning views of the whole city. This is a great place to come for views at sunset (although it was rainy on the day we were there). Another good option for sunset views of Bratislava’s compact Old Town is SkyBar, which happens to have some of the best cocktails in town.

If you are only spending one night in Bratislava, then you should definitely try some Slovak food before leaving. This cuisine is not super well-known outside of this region, but Slovakian food has humble origins, filling portions and a history steeped in cross cultural ingredients. Two great places to sample traditional yet delicious Slovakian food are the Slovak Pub north of Old Town or Modra Hviezda on Castle Hill.

If you are staying in Bratislava for two nights, I would definitely recommend having a meal at FouZoo for something a little bit different. You’ll sample plenty of Slovak food on the culinary tour I recommend below, so why not try some incredible Asian fusion cuisine that rivals restaurants in big cities like Chicago and Londnon. The plating at FouZoo is impeccable and the flavors are very interesting and well-balanced! After dinner, pop into the stylish speakeasy-style Michalska Cocktail Room for one of the best cocktails in Bratislava.

What to Do in Slovakia in 48 Hours

With more than one day in Bratislava, I would recommend checking out a few of the city’s small but mighty museums. The Old Town is full of interesting historical features that give an insightful look into the history of Slovakia, which I knew very little about prior to visiting. Start with the Primatial Palace. It only takes about a half an hour to visit, but the Halls of Mirrors will leave you speechless. It reminded me of Versailles!

The Museum of Bratislava inside the Old Town Hall has lots of urban historical relics depicting the centuries of history that went into the city’s development. You can also climb up to the Old Town Tower from inside the museum to get amazing views of Old Town. Finally, the Museum of Arms has a wide assortment of weaponry, sorted by floor, from swords and suits of armor to catapults. The museum winds it way up a tower, which also has lovely views from the 360 panorama at the top! 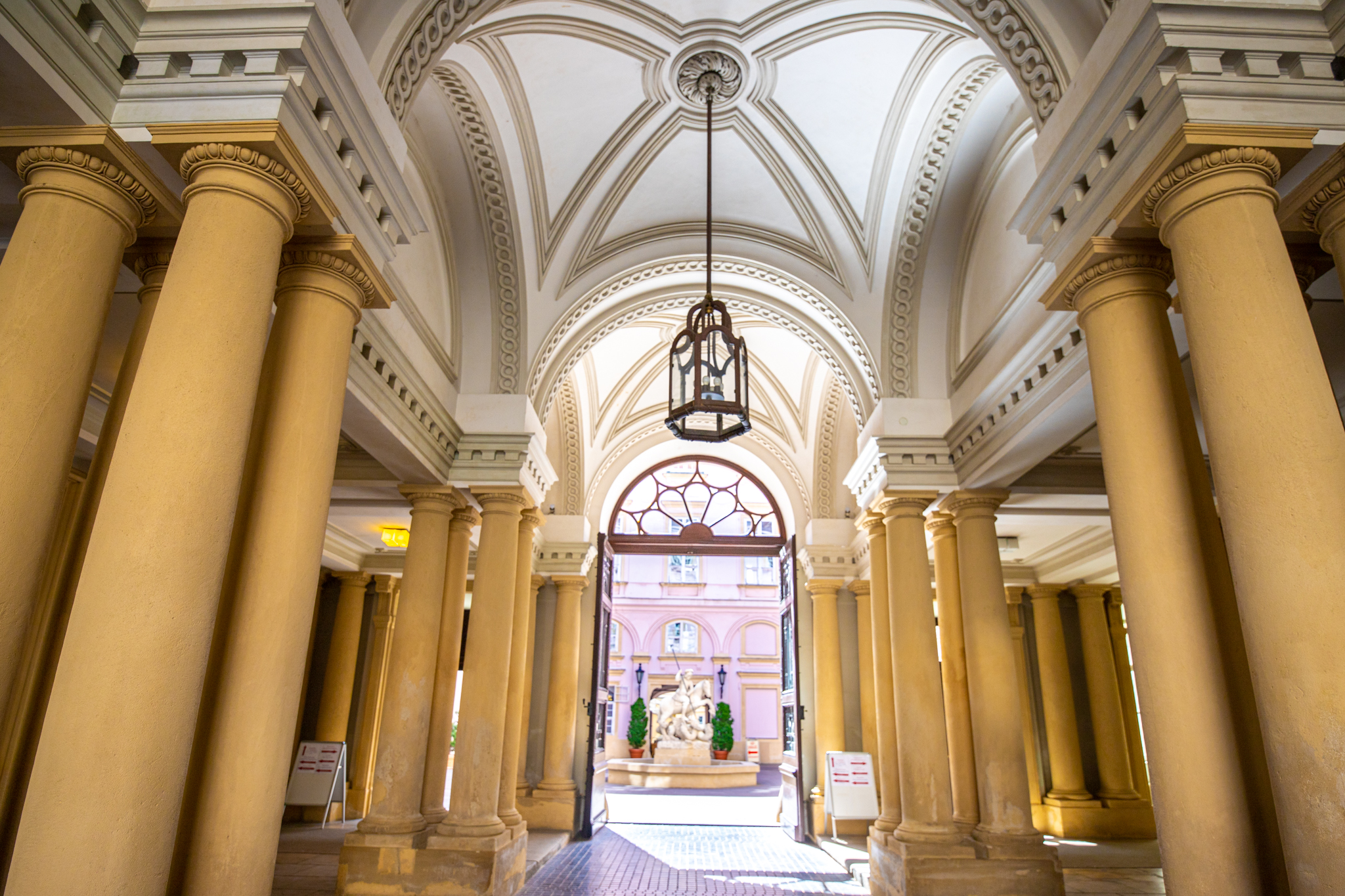 To sample the rich and filling cuisine of Slovakia, I can’t recommend this Delicious Bratislava culinary tour enough. It was one of our highlights from 48 hours in Bratislava! We were the only guests on our tour, so our sweet guide Sofia gave us a private tour of some of the best local spots to try Slovak dishes in Bratislava. I won’t give away all the spots she’ll take you, but we enjoyed a cheese plate, microbrewery beers, Kapustnica soup, (cabbage potato and sausage), sheep’s cheese gnocchi, Slovakian pierogies and Slovakian crepes. We were SO full at the end of this tour — it is a great value and you should come very hungry.

Hike Up to the Bratislava Castle

A great way to walk off the inevitable food coma that will come after Sofia’s tour is to hike up to the Bratislava Castle. There are several paths up the hill or you can take a city bus up to the top if you don’t want to walk. The castle that sits at the top of the hill now is actually a rebuilt version of the original castle, after Napoleon’s army recklessly burned it down accidentally in the 1800s. This is the most famous of the tourist attractions in Bratislava with lovely views over the entire city. On a clear day, you can even see Austria and Hungary! There is a museum inside if you are interested, but I wasn’t super impressed. The ones I mentioned earlier are more interesting. If you’re in need of caffeine on your way, definitely stop at the trendy Kava.Bar for a delicious espresso or cup of coffee.

Although most Slovakians still drink predominantly Czech beer, a burgeoning craft beer scene in Bratislava is starting to change the trend. Be on the cutting edge of beer tourism by doing a small beer crawl through Bratislava! Start your DIY beer tour at Sladovna House of Beer in Old Town. This brewery and pub offer a quintessential green beer that is made green not by dies, but by herbal ingredients. If that isn’t your thing, their malty varieties are well-balanced and flavorful. If you’re hungry, don’t miss the spicy pub cheese spread, a Slovakian classic.

Just a couple blocks away, Be Unorthodox Craft Beer Bar is your next stop. With an ever rotating menu of craft beers, you are sure to discover delicious new brews here. For a more traditional yet lively take on Slovakian craft brew, make your way to Mestiansky Pivovar on the north side of town. We found the bar tenders here to be very friendly and knowledgeable, offering excellent recommendations from one of the 10 house-brewed beers. Your final stop on the DIY beer tour of Bratislava is the trendy Fabrika Beer Pub, which offers a wide assortment of beer, wine, cocktails and food. They’ve got a little bit of everything, but their lagers and IPAs were my favorites! 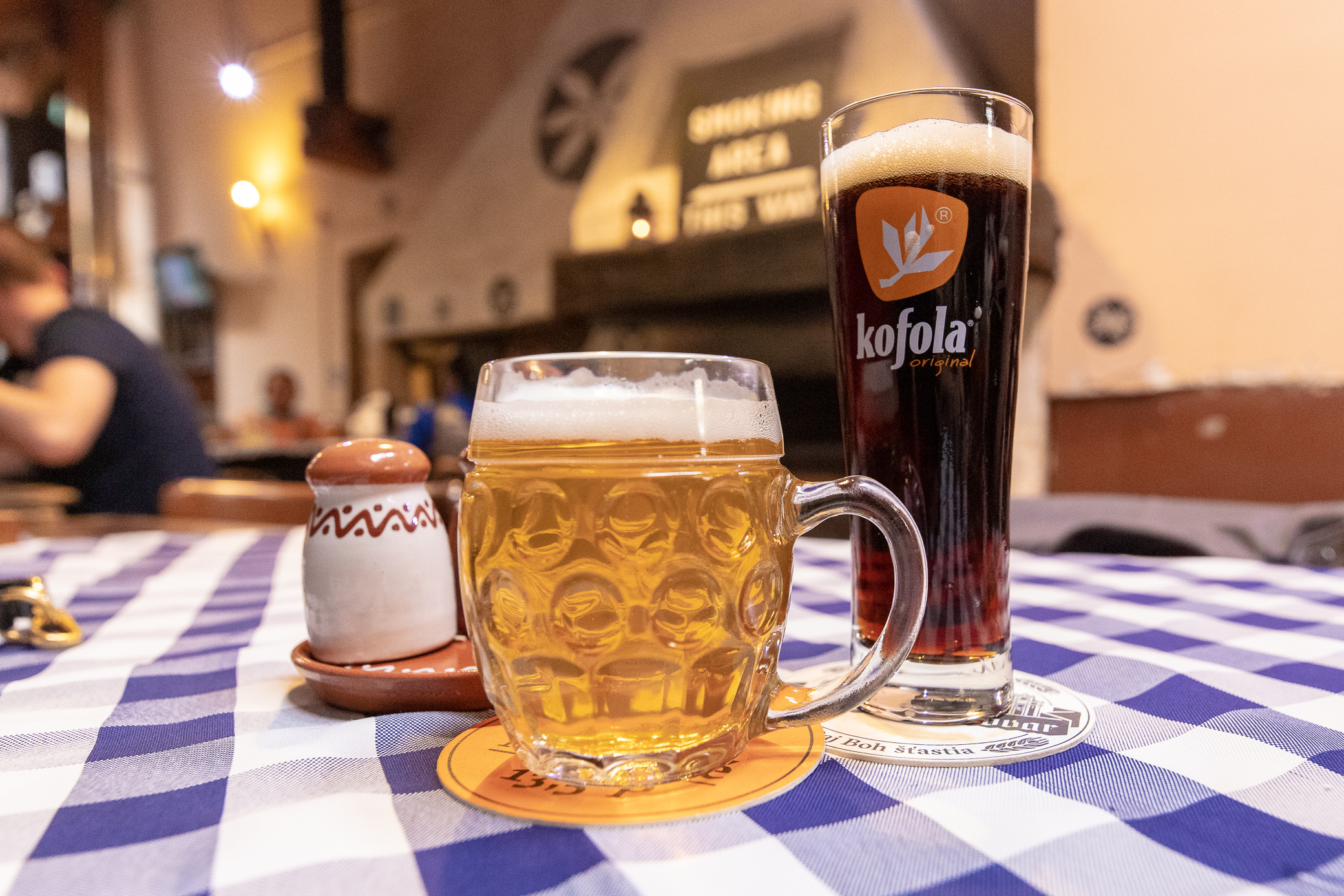 Do you have questions about visiting Bratislava? Comment below and I can help answer them!