If you had told me at the beginning of my winter trip around Scandinavia that a former Soviet capital city would be my favorite destination on the whole trip, I would have been doubtful. I had heard great things about Tallinn, but I fell in love with this city so hard and so fast that I was completely surprised by it.

Tallinn is a popular day-trip from Helsinki, thanks to a high-speed ferry connecting the two capitals in 2 short horus. In fact, many Finns take the ferry so they can purchase cheap alcohol in Estonia to bring back to Finland, which has exorbitantly high liquor tax laws. They bring it on by the cart load; it is quite a sight to see.

Regardless, Tallinn is more than a day-trip kind of town. I would recommend spending at least 1 night, if not 2, in Estonia’s capital city because there is more than enough to explore in Tallinn. Rushing through this alluring city would be a shame because you would miss the slow-paced charm that made me fall in love with Tallinn.

My recommendations for how to spend a perfect 48 hours in Tallinn, Estonia! 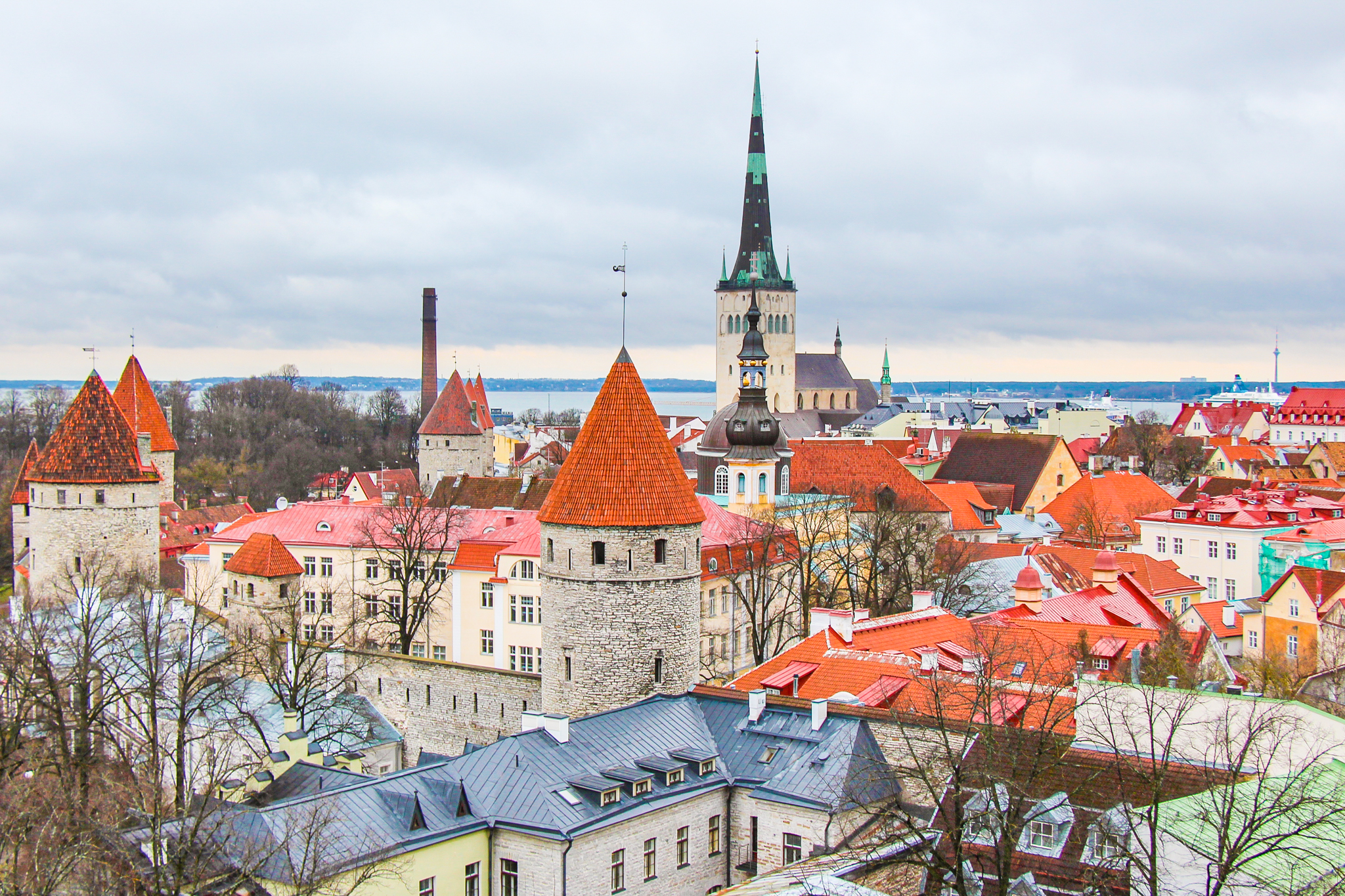 Every visitor should start their 2 days in Tallinn by exploring the charming streets of the old city. An easy place to start is the Town Hall Square, which conveniently had a big Christmas tree and Christmas market during our visit; I felt the holiday spirit! Enjoy meandering through the cobblestone streets of old town Tallinn without much of an agenda, because the streets themselves are incredibly picturesque and charming. The orange rooftops, quiet cafes, and cute shops won me over immediately. I felt cozy and happy in this city.

In total, plan to walk around the old city for about two hours to ensure that you see most of the famous Tallinn sites like:

Much of Tallinn’s old city is perched on a hilltop so once you make it to the top, don’t forget to look at the view! There are two primary viewpoints that offer sweeping views of the city below you. The Patkuli Viewpoint looks northeast while the Kohtuotsa viewpoint looks east, both of which are wonderful. If you’re willing to walk a little bit further, there is also the Toompea viewpoint with 360 views of the whole area. It is breathtaking — I could have stood there for hours. 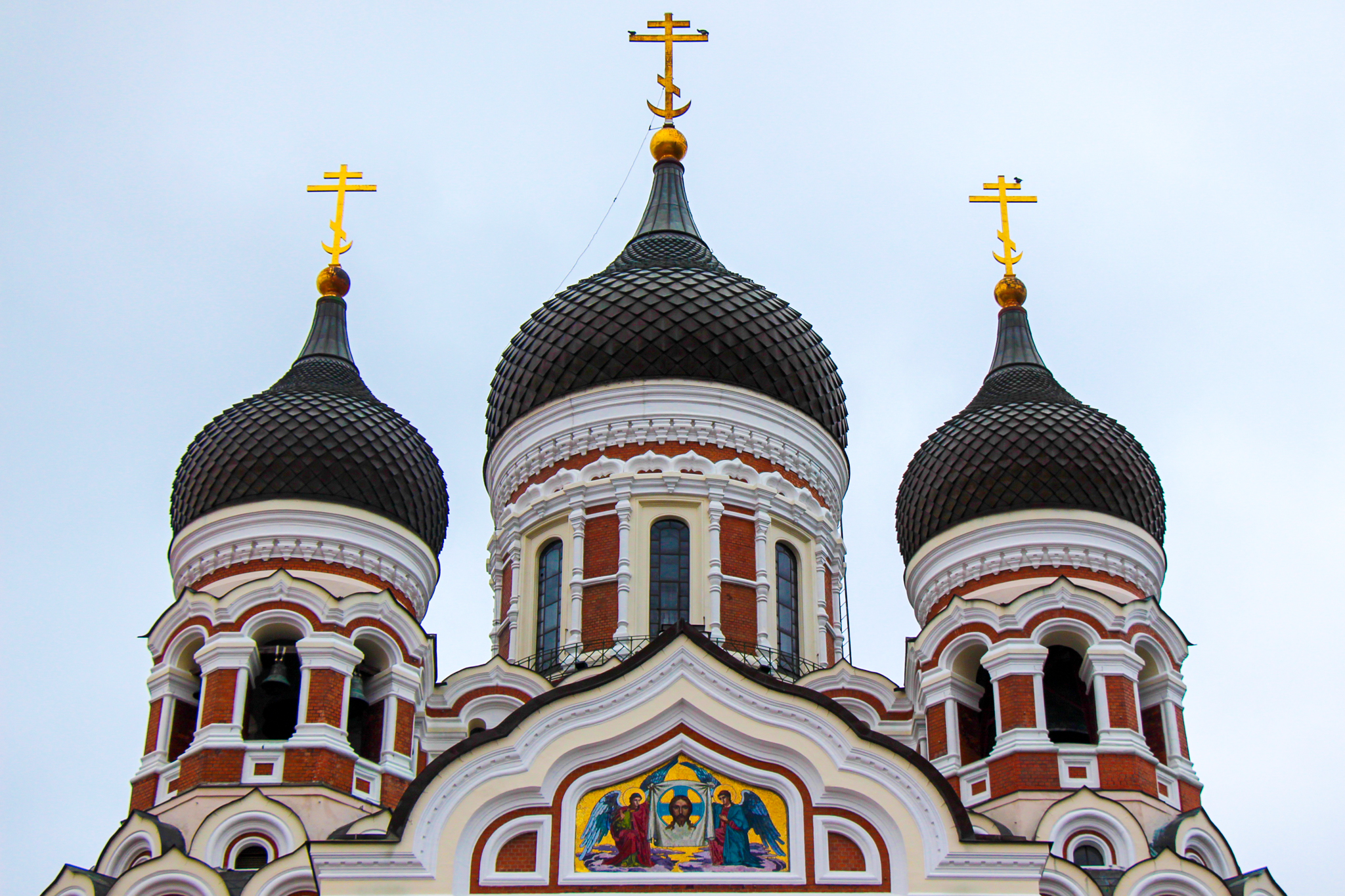 For a distinct contrast to the old city, head down the hill to one of Tallinn’s trendiest areas—the Creative City. Also known as Telliskivi by locals, this neighborhood of Tallinn just screams cool. Like painfully cool. There are pop-up restaurants built into shipping containers, refurbished Soviet-era watch towers, and public art installations.

This part of Tallinn was totally my vibe, and I spent several hours admiring the incredible street art murals. I couldn’t put the camera down as we walked around! There are vibrant graffiti-style pieces, tongue-and-cheek cartoon pieces and 3-D installations (like the awesome chipmunk you see below). The most moving street art murals to me were some of the politically-charged murals because you can really get a sense of the tense history that has defined this country. There is endless inspiration that you can draw from Telliskivi—I immediately understood where the name Creative City came from!

For foodies, the Creative City is one of the best places in Tallinn to have dinner and late-night drinks so I would recommend hanging around this area to end the first of your 2 days in Tallinn. You’ll feel Telliskivi come alive! The cost of living in Estonia is significantly cheaper than other neighboring countries so you feel like you can indulge in a delicious meal.

Built in a renovated grain warehouse, we enjoyed dinner at F-Hoone. We got the beef tartare, sweet potato falafel and my favorite was the veal cheeks with polenta. The cocktails are F-Hoone are also great, and mine came with infused floral syrup! Another spot I enjoyed was Boheem kohvik Kalamajas, a bohemian style restaurant just behind the Turg food market (mentioned below). The Russian pork dumplings with a creamy horseradish sauce at this hole-in-the-wall restaurant were seriously incredible. I could have eaten hundreds of them!

Estonia has a growing craft beer scene so for after-dinner drinks, try one of the local craft breweries or beer bars in Telliskivi. We sampled several local beers from the region at Pudel Baar which has a friendly vibe while the interior design and beer selection at St. Vitus Are drool worthy. Across the street Shvips is a cool hangout spot or if you’re more of a cocktail drinker, check out Sveta Bar which has a good selection of gin and vodka cocktails.

Start second day in Tallinn in the same area where you ended it — in the Creative City! But this time, you’ll get to enjoy local produce and food at the Balti Jaama Turg market. A newly constructed indoor/outdoor market, I was in heaven at this place immediately. The outdoor market area welcomes local farmers and vendors to sell fresh vegetables, jellies and pickles every morning. Inside the indoor space, there are a variety of permanent shops like a large grocery store, butcher shop, cupcake store and wine shop.

Upstairs from the food stalls, you will find stands of local artists and producers. There are jewelry producers, screen printers and all sorts of other kinds of designers. These are the young and creative Tallinn residents who are driving the progressive change in Telliskivi and I was all too happy to support their small businesses!

I always think it is important to learn and experience the sober moments of a country’s history, and Estonia has had a long and dark past. Between Soviet occupation and regional isolate, Tallinn is an interesting place to learn about some history you’ve probably never known about. Ever wondered what it felt like to be live in the Soviet region during the Cold War era? A glimpse into this dark time in Estonia’s history is showcased at the KGB museum or the Museum of Occupations.

In the 1970s, the Viru Hotel in central Tallinn was the only hotel where foreigners were allowed to stay, and the KGB had a secret spy base on the 23rd floor to keep tabs on everyone. The KGB museum Is built inside this base, retaining many of the KGB artifacts exactly as they were during the Cold War. You will be up close and personal with the behind-the-scenes equipment like bugged wires, secret phones and recording equipment used by KGB agents. You are required to book tickets to the museum ahead of time.

Another cultural sight that will demonstrate the hardship of life in Estonia over the last century is the Museum of Occupations. Largely focused on Soviet occupation, this museum features extensive video footage of life in Soviet-era Estonia. The curators of this museum also recently opened an exhibit inside the KGB prison cells where countless Estonian dissenters, writers and politicians were held, tortured or even killed in the hands of Soviet spys. The content of the museum will certainly leave an impression but you’ll feel uplifted by the happy ending of modern independence.

To reflect just a minute on my impressions of Estonia, it is the first former-Soviet country I have ever visited. I didn’t really know what to expect going in. Even now, I can’t quite describe the feeling articulately but I’ll do my best. There is a distinct energy in the air, a pride in the resilience and independence of modern Estonia. But the relics of the Soviet era still surround you — decrepit watchtowers, Soviet-style architecture — reminding you that the presence of their behemoth neighborhood always looms over this tiny Baltic nation.

Evening: Dinner in the Rotermanni Quarter 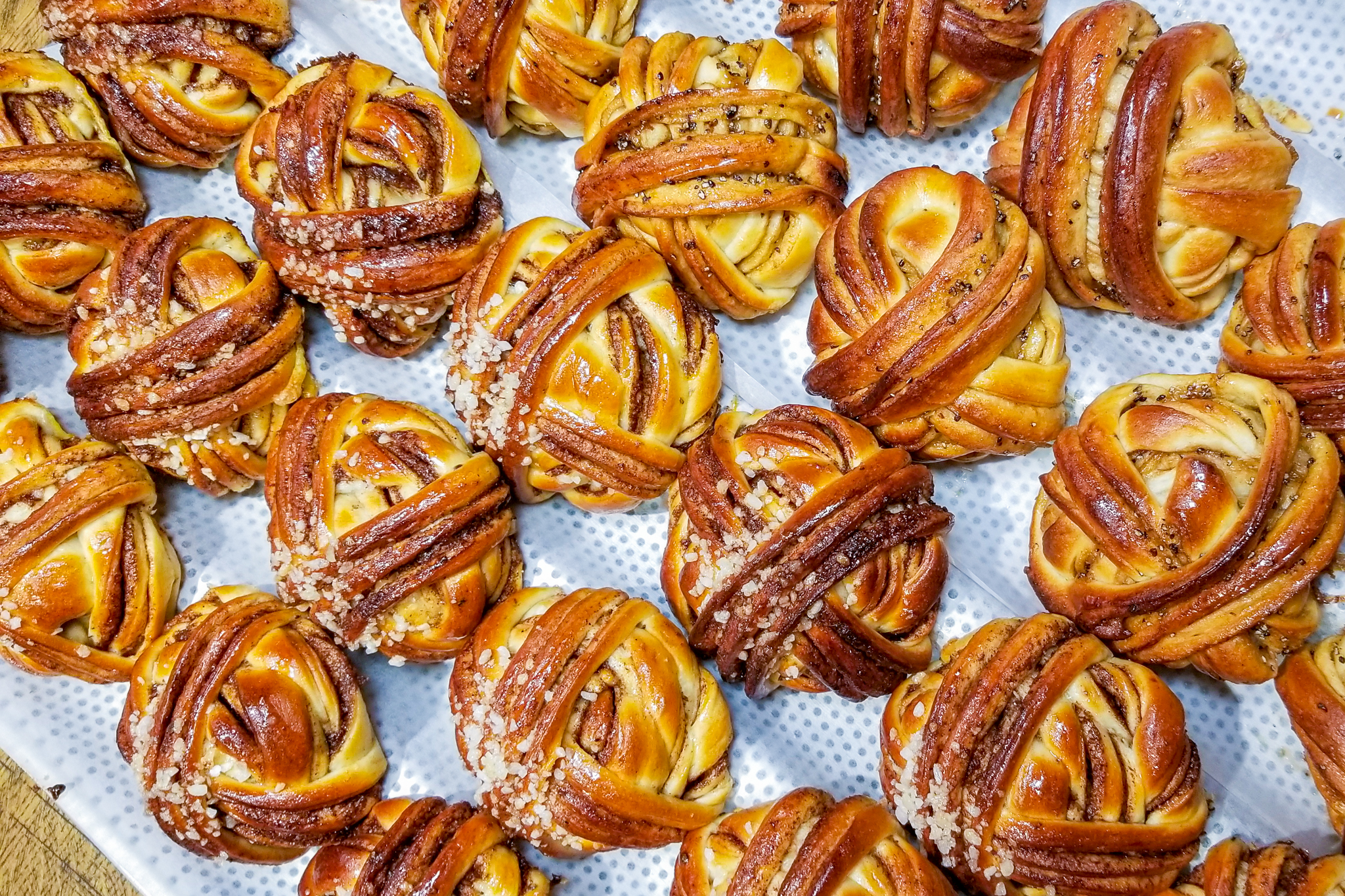 Once you’re sufficiently spooked about modern surveillance states, try to clear your mind by heading over to the Rotermanni Quarter. Tucked away in the downtown commercial area, this shopping and restaurant area is housed in a mix of new construction modern architecture and old industrial warehouses. We stumbled on this unique area as we headed back to our ferry and it felt serendipitous because it was totally our scene!

ROST is an excellent coffee shop and bakery that bakes their stuff in house. Expect amazing smells when you enter. We ordered regional favorites like cardamom rolls and cinnamon buns both of which were the best I had on our whole trip. BrewDog, which also has a location in Helsinki, is a varied craft brewery that serves up their beers as well as others. I particularly liked the bottle shop TapTap which is built directly into the old grain warehouse keeping the old grain funnels as part of the design.

Tallinn is one of the most interesting and dynamic cities that I have visited in Europe. It is changing rapidly, but it wasn’t until I spent 48 hours in Tallinn that I truly understood how incredible this city is. With this two day Estonia itinerary, you’ll see some of the best things that Tallinn has to offer!

Do you have questions about visiting Tallinn? Comment below and I can help answer them!