Sample Itinerary for 2 Weeks in China

It isn’t often that I return to an international destination in my travels, but somehow China keeps calling me back. I have visited China on four separate occasions—2006, 2008, 2010 and 2019—and China is tied with Mexico as the country that I have visited most often, which is saying a lot considering that it is thousands of miles from my home country and does not share a border with it.

Why China you might ask? Most people are perplexed by this. China is typically seen as a challenging travel destination, especially for American travelers like myself, and visitors often return with mixed feelings about China, preferring to visit other Asian countries such as Japan or Thailand.

China is a massive country and you could spend half a lifetime exploring this nation. I created this 2 week itinerary to be a starting point for traveling in China, ideal for first time visitors looking to hit a few of the major highlights. There are plenty of places In China that are left off of this list (sorry Chengdu!), but hopefully this will give you a good idea of how to structure your 2 weeks in China as a first time traveler.

This is the Perfect 2 Week Travel Itinerary for China! 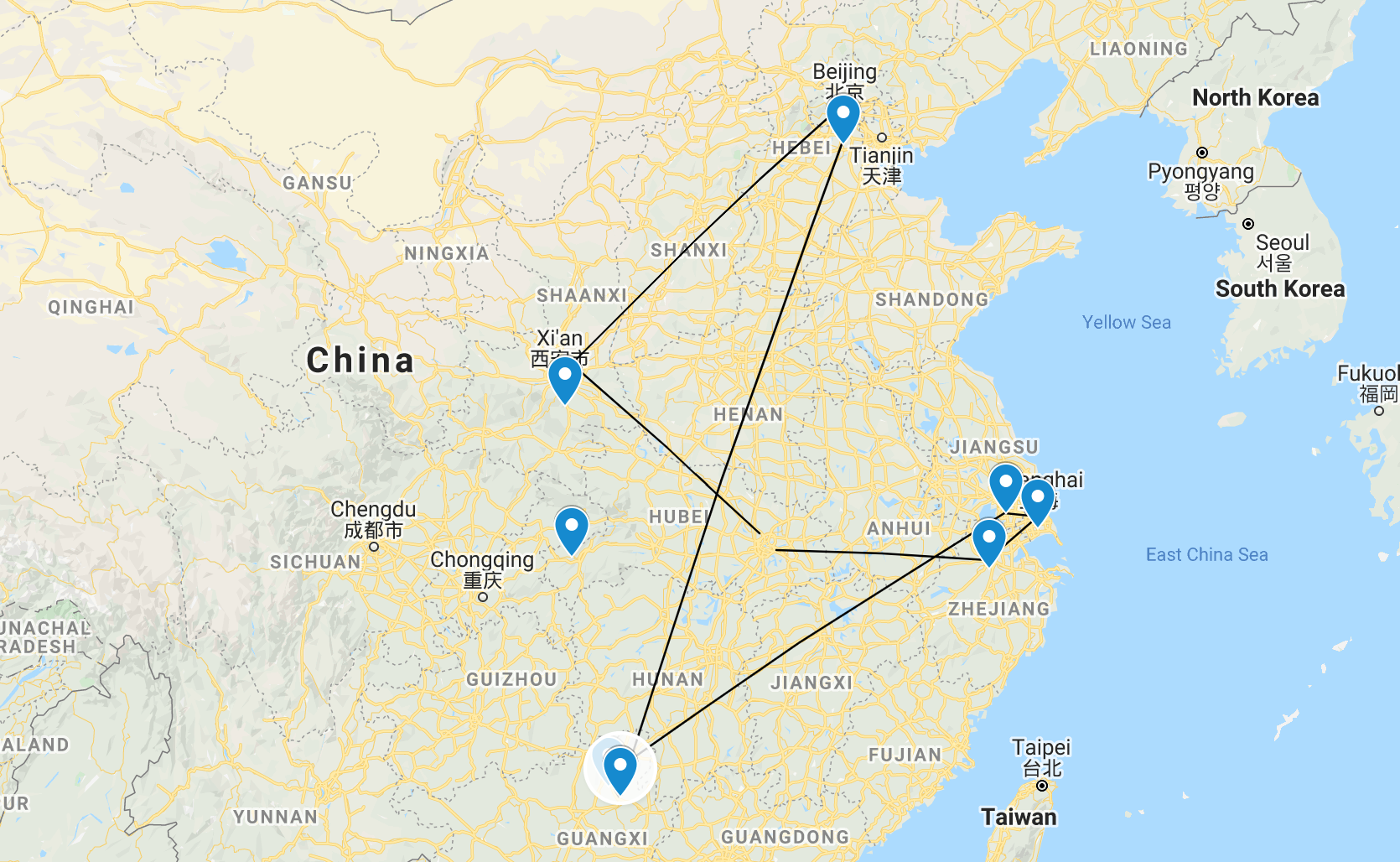 As the cultural and political capital of China, Beijing is a natural place to start your two week itinerary in China. There is enough to do and see in Beijing to fill a whole week of travel, but you can visit the highlights in approximately 3 days (although they will be jam-packed days). The major sights that you’ll want to explore in Beijing are:

Because Beijing is so dense and full of exciting cultural sights to see, I wrote a separate article about spending 3 days in Beijing where I go into more detail with deeper itinerary suggestions. From the above list, you’ll essentially do the first three activities on day 1, the Great Wall on day 2, and the last two activities on day 3.

Home to the world famous Terracotta Army, Xi’an is a must-see destination for travelers visiting China for the first time. Xi’an is the center of China, so to get there from Beijing it is best to fly. There are daily flights available and it will take less than 3 hours.

The Terracotta Army was discovered in 1974 by local farmers who lived in the area and the site has been excavated in the years since, revealing nearly 8,000 soldiers dating back to 210 BC. The grounds are now a museum and I would recommend spending about half of your first day exploring this UNESCO World Heritage site. The terracotta army has largely been left as it was found, in deep pits, with the soldiers standing up. They were put here as part of a funeral ceremony for the first emperor of China, and you can walk along an elevated walkway around and through the pits of the warriors.

For your second day in Xi’an, spend your time exploring some of the other interesting sights like the large Muslim Quarter which is quite distinct from others you will see in China. It is lively with lots of delicious street foods to sample as you wander through the narrow streets! Finally, have a nice walk on the old city walls. This massive structure is in excellent condition—think of it like a mini Great Wall! You will have excellent views of Xi’an and the surrounding areas.

Not typically on the tourist circuit, Wuhan is a mid-sized Chinese city in the center of the country. It is a great stop in between several other popular tourist destinations in the area which gives you a chance to get off-the-beaten path a little bit. You can access Wuhan from Xi’an by high-speed train or via a flight.

One of the biggest draws in Wuhan for visitors is the Yellow Crane Tower. This stunning tower dates back to 223 AD although the current structure was built in the 1980s. It is a holy site in Taoism and you can climb up to the top of the tower for a beautiful view over the city and the Yangtze River. The tower is surrounded by a lovely park and gardens that are worth wandering through for some nice natural scenery. Also on the grounds of the Yellow Crane Tower is the menacing Yufei statue. A towering warrior, this intimidating statue depicts Yufei who was one of the city’s protectors during the Song dynasty. Strike your favorite warrior pose in front of it for strength!

In a country with more than a billion people and so many large cities, it can be hard to find tranquil spaces. West Lake is one of the few places where it is easy to get some peace and quiet! Also accessible by overnight train from Wuhan or a short domestic flight, this beautiful natural area offers a nice break from all the hectic city experiences in China.

The best way to see the lake and all the interesting stops around the lake is by walking or biking. I personally opted for the bike method and got around the entire lake with lots of stops in a few hours. There is a paved bike path around nearly the entire lake, so you don’t need to be an expert biker to enjoy it. Most hotels and hostels offer bike rentals, but there is also a public bike share that you can rent off the street.

A few highlights around the lake include the Leifang Pagoda, Hugang Park and the Yuewang Temple. West Lake is an excellent (although long) day trip from Shanghai, or it makes for a peaceful overnight. I had a lovely stay at the International Youth Hostel hostel just off the lake.

If Beijing is the historic and political hub of China, Shanghai is the modern economic and cultural engine of China. This mega-metropolis offers a futuristic glimpse into urban life in Asia with countless neighborhoods, restaurants and bars to explore over the course of a few days.

A walk along the Bund waterfront is a must-do activity while in Shanghai, China. The glittering, towering buildings of the Shanghai skyline are truly a sight to behold! Each night from 6pm-10pm, the full skyline will be lit up, each building with its own elaborate show. Some of the buildings have screens that play a reel of highlights while other ones have projectors that flash different shapes while others have flickering lights that flash between a variety of different colors. Regardless of which is your favorite, it is truly a sight to behold!

Sometimes known as the “Venice of the East,” Suzhou is a city built on canals and quaint walkways located 2 hours’ drive west of Shanghai. Really, Suzhou is a day trip from Shanghai so if you don’t want to change hotels, you don’t have to. But it also has some really cute boutique hotels that you can stay at if you’re interested in getting outside of the frenzied city pace of Shanghai.

Suzhou is a lovely place to just wander around and get lost in the canals. It feels like a step back in time, since most of the old town is not accessible by motor vehicle. There are picturesque bridges and tiny shops to discover around each corner! You can hire a local walking tour guide or you can do a self-guided tour or you can just enjoy the feeling of getting lost in this charming city.

In contrast to the major cities, Guilin is a “small city” in China with “only” 6 million people which is dedicated to green spaces and integrating urban life with nature. You’ll notice a distinct difference as soon as you arrive after your 2 hour flight from Shanghai. The pace of life feels slower, parks and trees surround you, and the air is clean. This region is my favorite part of China that I have visited so far, and I highly recommend dedicating a few days during your 2 week travel itinerary in China to exploring this area.

Guilin is sometimes called the city of lights, because at night their 4 main lakes, bridges and canals are lit up with an array of colorful lights. The best way to explore the night lights is on a nighttime cruise! You’ll want to reserve your seats ahead of time, since these cruises do sell out. You’ll board the small canal boats across from the twin pagodas at the main boat harbor. The cruise will last for about 2 hours as your make your way through the lakes and under all the major bridges in the city.

Yangshou is in the heart of China’s idyllic limestone mountains, which have been formed over millions of years of erosion. The curved yet jagged mountains are absolutely stunning, and in my opinion, are a must-see on your first visit to China. A 4-hour cruise along the Li River will provide excellent opportunities to view the mountains as you peacefully glide down the river with lunch and beverage service abroad.

The Li River cruises end in Yangshou, a popular city for rock climbing. This international fame brings an assortment of people from around the world to this small town. You’ll find a higher density of Italian, French and Mexican restaurants than most of cities of this size. Yangshou has a lively shopping district where you can find a great assortment of souvenirs and local art, but I would also recommend getting outside the city center to explore the beautiful rice paddies that surround it. Again, the best way to do this is a bike ride!

Are you inspired to plan your trip to China? Pin the image below so you can access these itinerary suggestions anytime!