Street Art Guide Buenos Aires – 20 Murals You Have to See in Argentina! 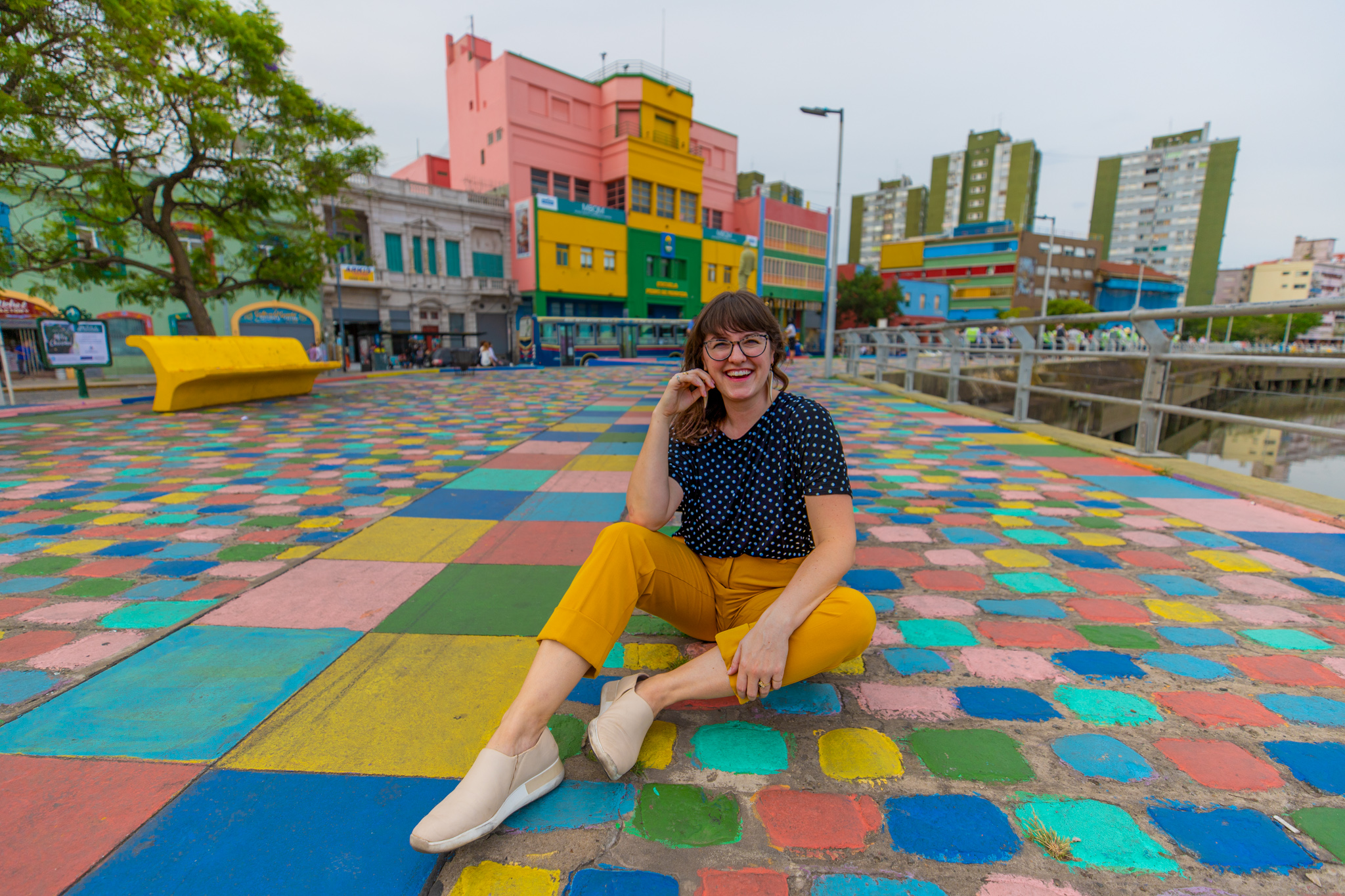 More than most cities I’ve visited, Buenos Aires is a city that embraces and enjoys street art. You’ll immediately notice murals on buildings, tunnels, and overpasses all around the city, creating a vibrant patchwork of art in nearly every neighborhood. It makes walking around a joy with a sense of discovery. You are bound to find a mural that you love!

Buenos Aires has a long history of street art which I had the pleasure of learning about on a guided street art walk hosted by a local BA artist collective Graffiti Mundo. The organization works to empower street artists in the city to earn a living with their art, and even has a small gallery with work from various Argentinian street artists available for purchase.

The walking tour largely focused on the Palermo and Villa Crespos neighborhoods, which have a high density of murals, but I also did some searching for art in other areas around the city. This list is by no means a comprehensive guide to the street art in Buenos Aires, because I think it would be almost impossible to do so – the sheer number of pieces around the city is astounding and you are sure to discover many large and small murals yourself just by walking around.

These 20 Street Art Murals in Buenos Aires Will Inspire You and Get Your Creative Juices Flowing! 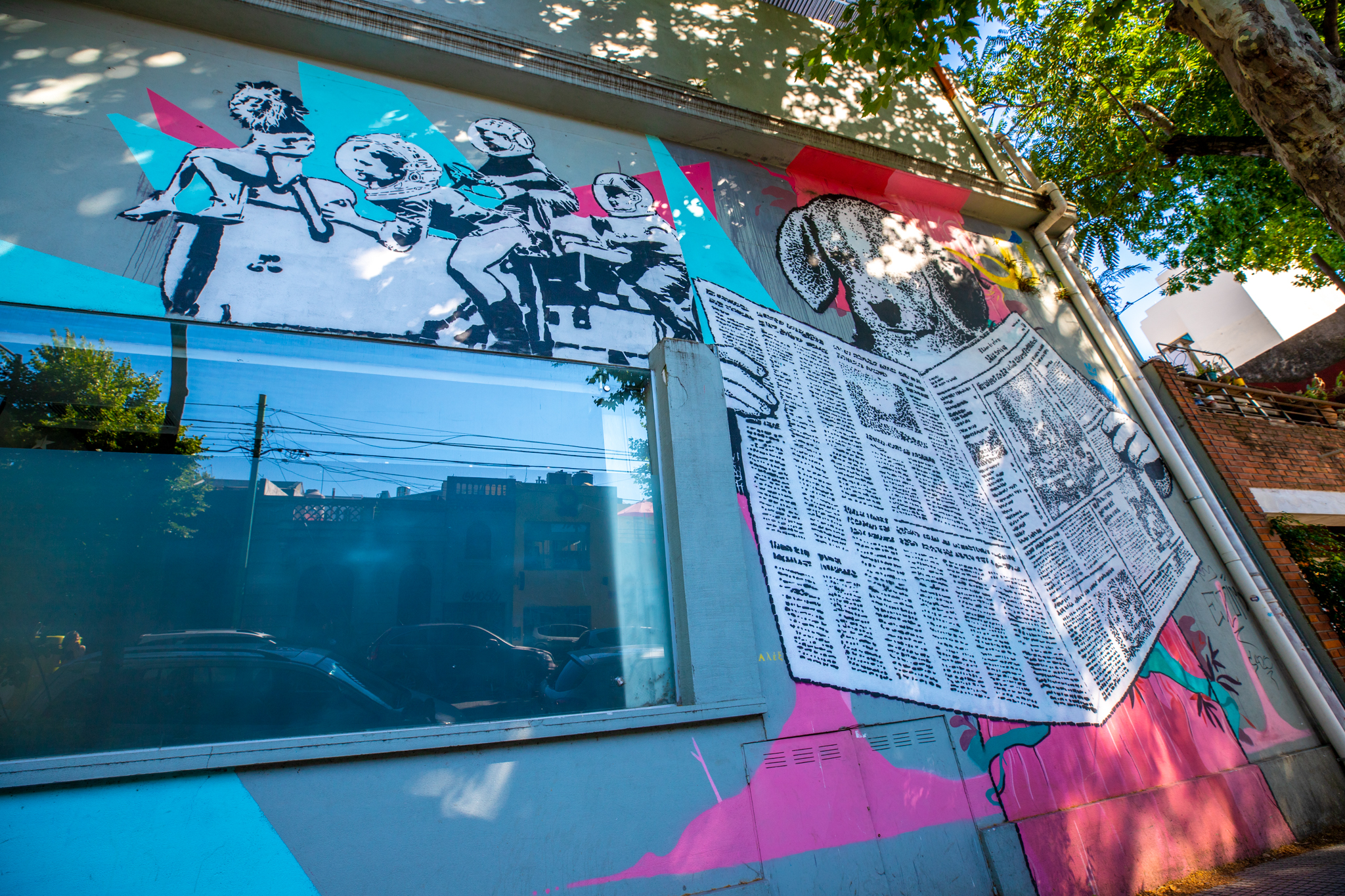 Featuring a variety of stencil pieces running across a wall, this mural was painted by RunDontWalk, a famous Argentinian stencil artist who I had the opportunity meet during my Graffiti Mundo street art tour. Most of his work features animal figures doing some human activity, a theme you can prominently see on this mural with a dog reading a newspaper or an astronaut lion riding a train.

On Madison Avenue Bar at Uriarte 1689

Depicting Donald Trump as Batman’s the Joker, the menacing figure is sshhing the Statue of Liberty, representing Trump’s hostile treatment of American rule of law. This political piece was painted in April 2018, capturing the largely unsympathetic sentiment of the Argentinian people towards the American president. 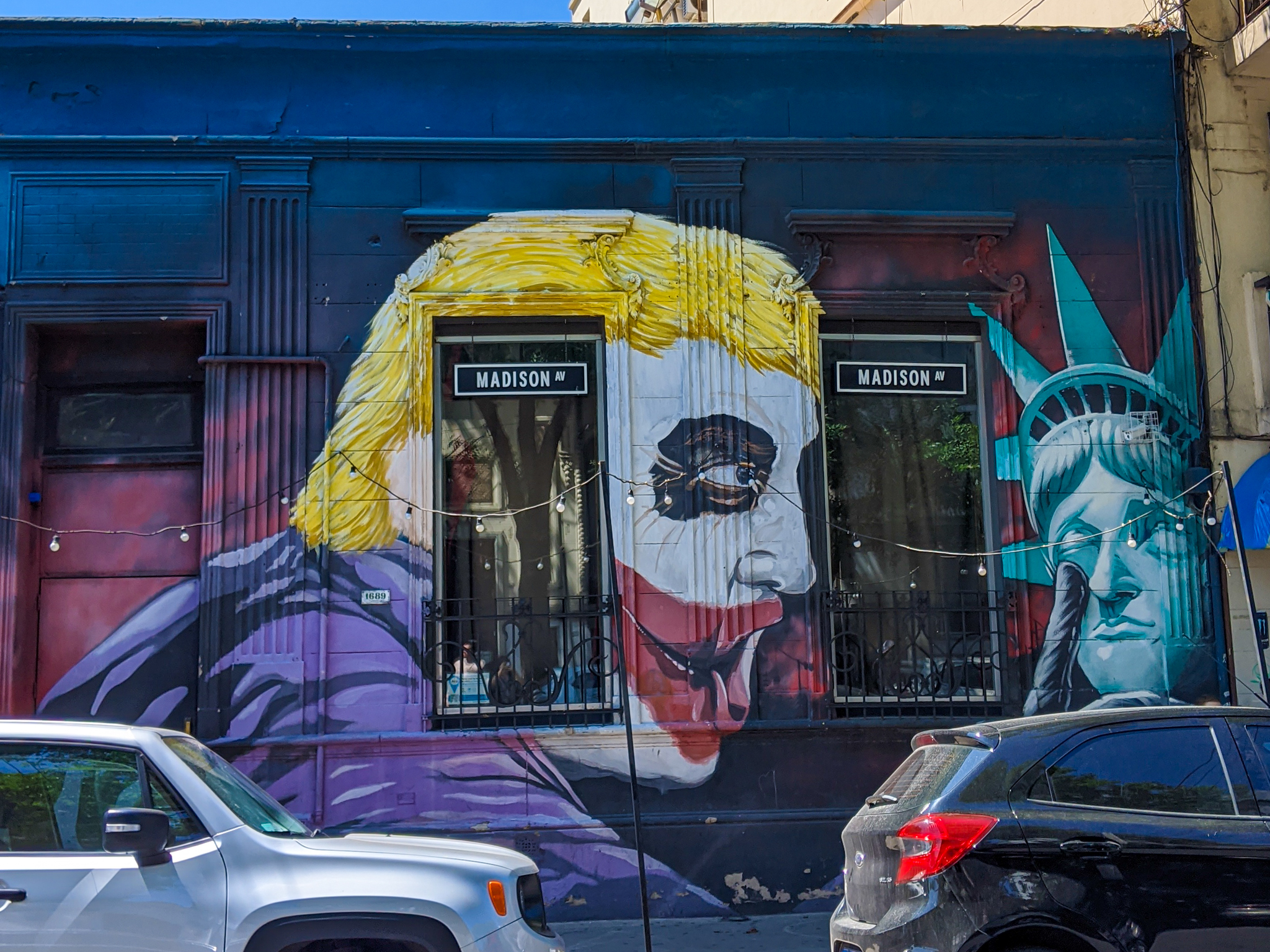 Corner of El Salvador and Uriarte

Just around the corner from the Trump mural is a much more cheerful piece featuring a colorful humpback whale diving among trees and mountains, juxtaposing two important ecosystems in southern Argentina. 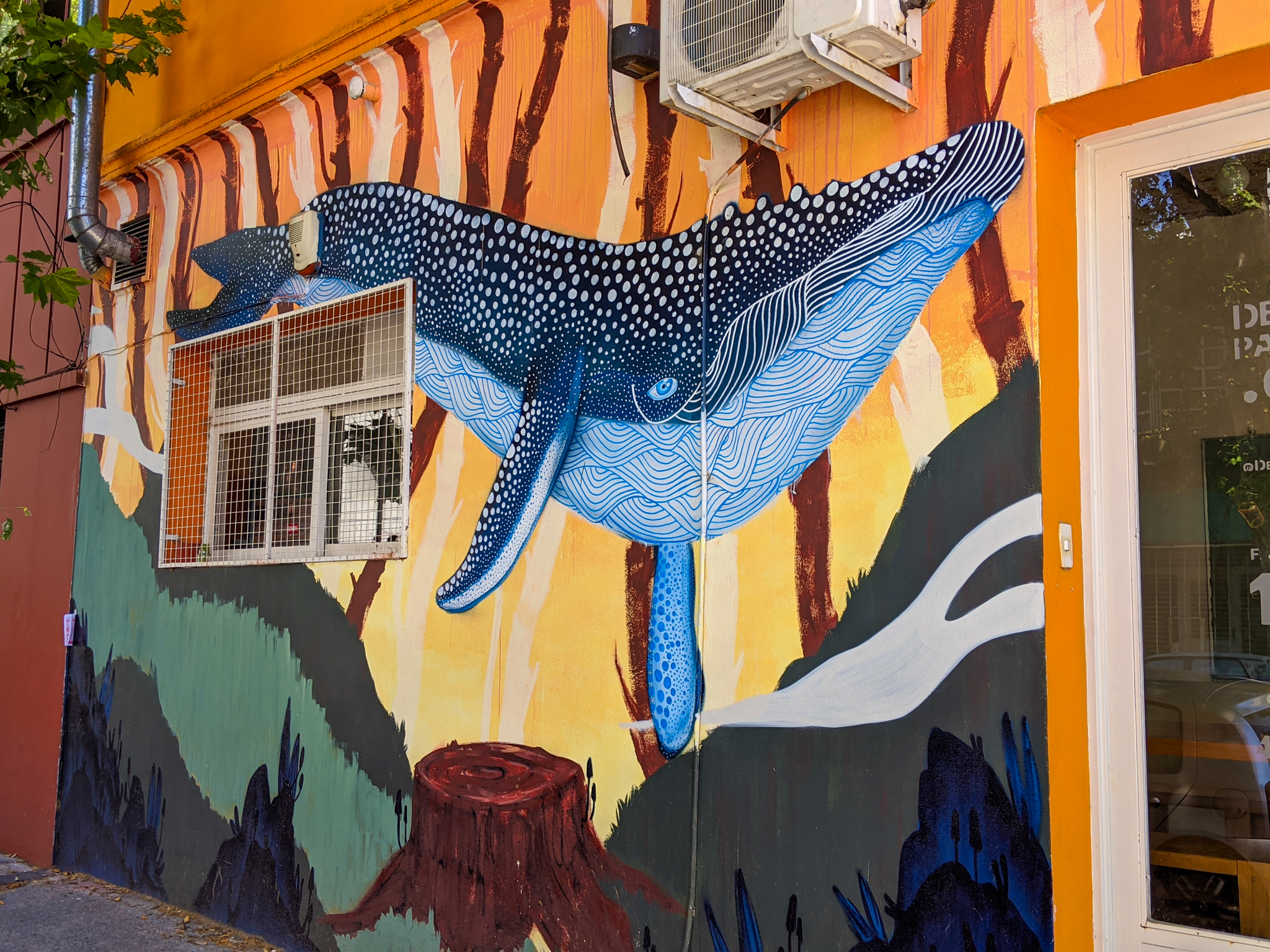 The towering mural of two minotaur’s sparring, the Teta & Salta mural was originally painted during a street art exhibition in Buenos Aires. The name stems from a mural that was previously painted on this exact same wall, commemorating two young men who were killed by state violence, which also gives rise to the mural’s theme of the inner beasts of humanity.

Painted by well-known muralist Jim Vision, this blue-hued mural is directly adjacent to the Teta & Salta Mural. It plays with the famous 19th century classic painting of Napoleon crossing the Alps but replaces Napoleon with a gaucho and his sword with a can of spray paint.

On a quiet corner of Palermo Hollywood, you’ll find Gualicho’s yellow and orange mural painted on a private home. Commissioned by the owners of the home, the mural features small characters, shapes and outlines which can be interpreted from a variety of perspectives. Several of the shapes incorporate indigenous elements, paying homage to the native people of South America. 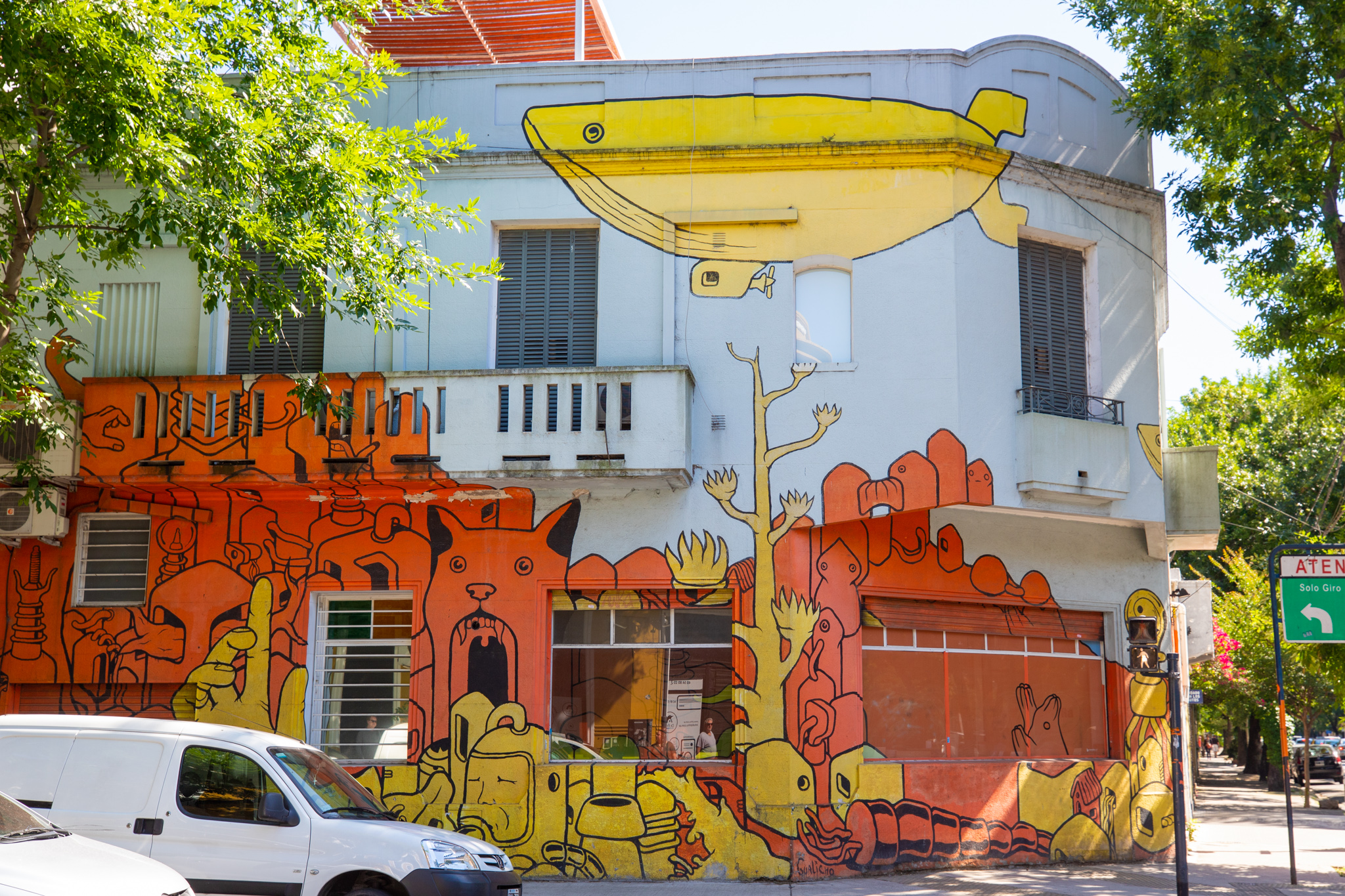 Painted by famed local BA artist Pastel, this mural features local plants found directly in the Palermo Soho neighborhood painted onto an apartment building’s garage. Pastel’s work almost always features flora as a way to connect BA residents to their natural environment. The artist uses water and ink over latex paint to create shadows and textures that bring the flora to life, as well as to create a unique matte look to the murals. 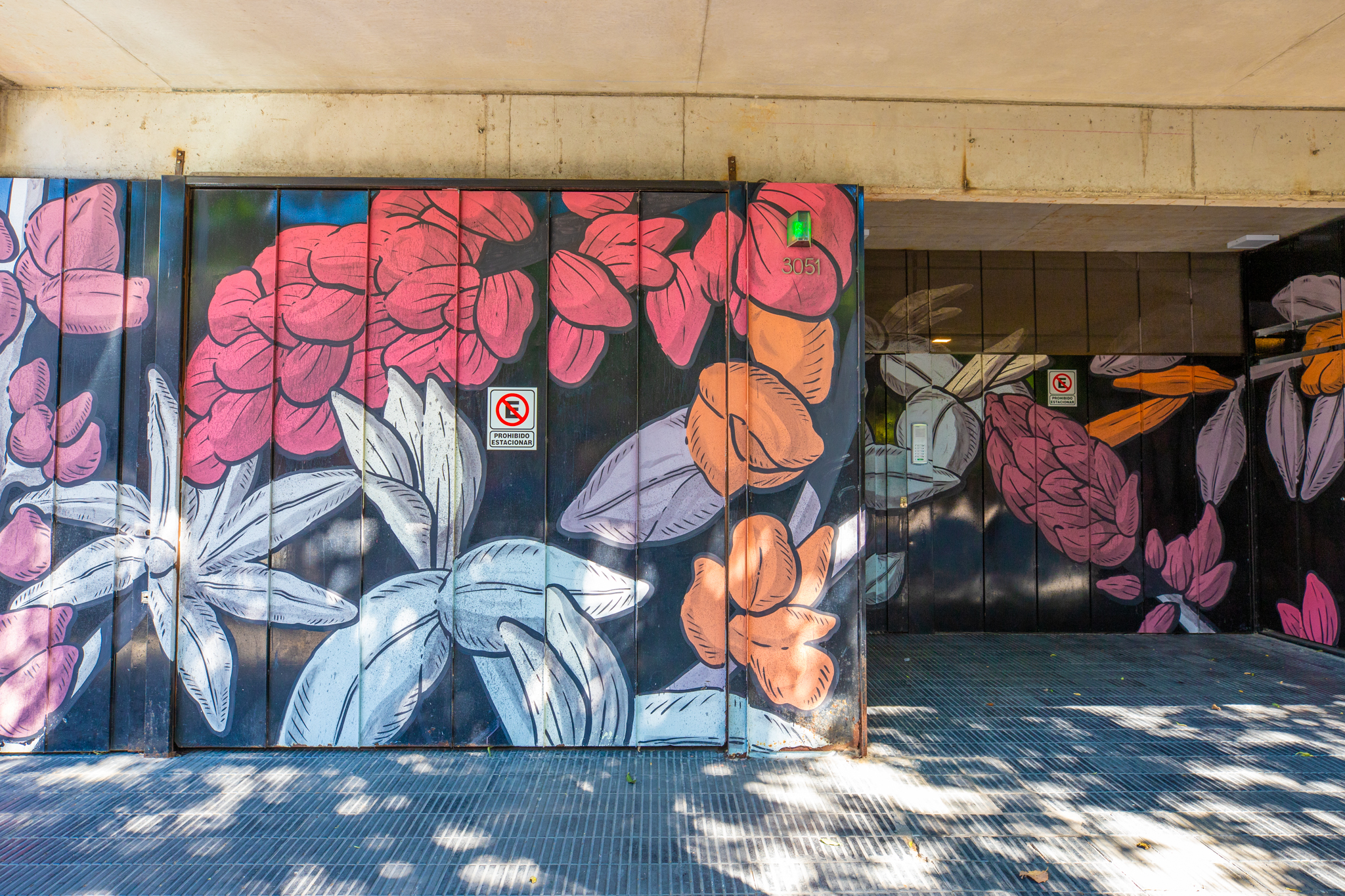 Featuring the work of six different street artists, this mural is one of the oldest pieces in Palermo. The mural features childlike figures in a bright array of colors, meant to bring a daily moment of lightness and joy to BA’s residents during tough economic times.

Layering stencils together in vibrant colors, Buenos Aires artist Caballo created a dramatic mural in Palermo Soho. Originally painted to promote a book release, the mural features themes and quotes from the book on a black background. Make sure to view the piece from across the street and close up to get a true sense of the work. 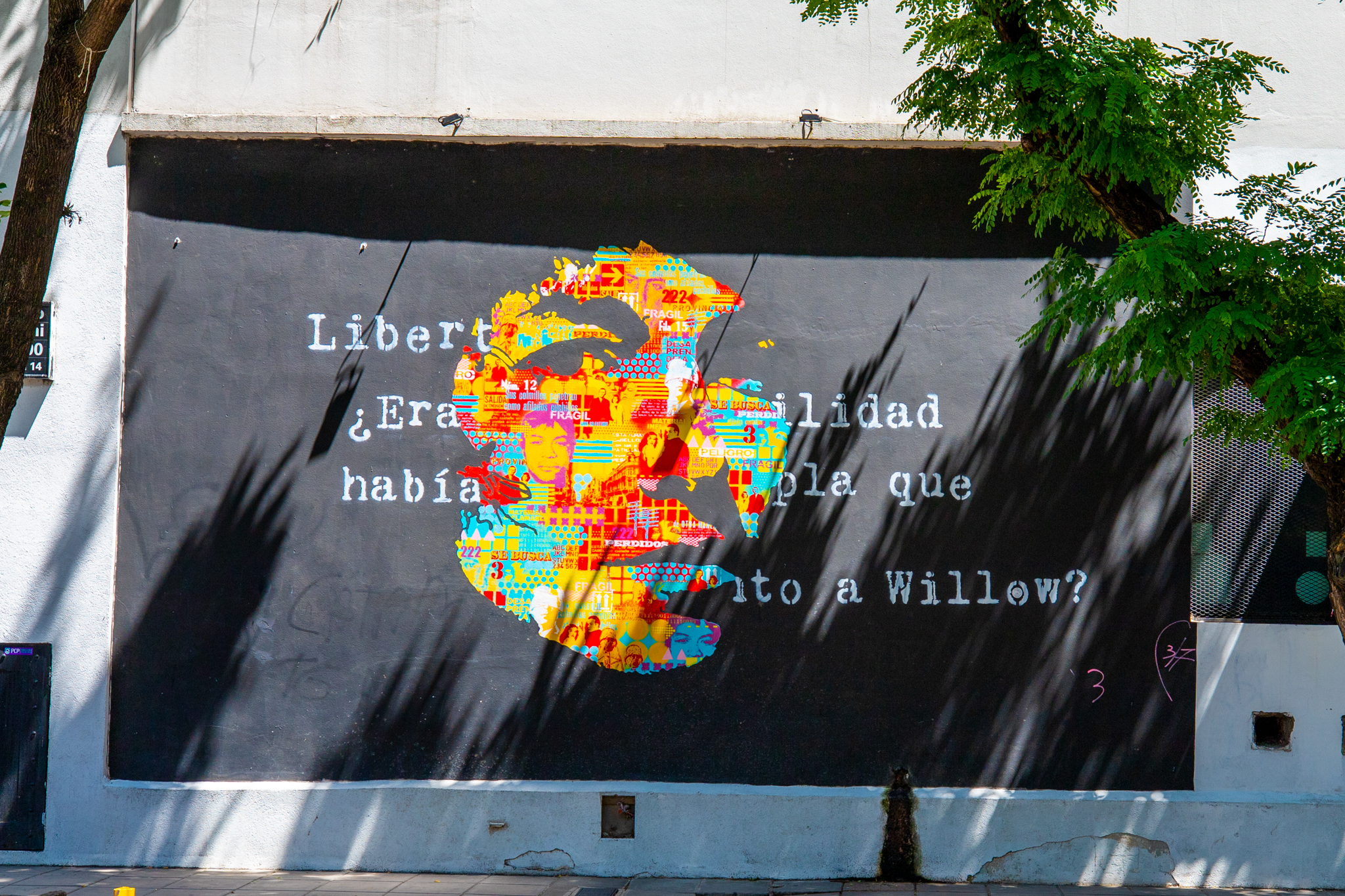 Serving as a backdrop to Plaza Luna de Enfrente, a children’s park in Palermo Soho, Mural de Los Suenos was painted by Guido Palmadessa featuring a small child reaching for a flower, meant to represent the process of immigrating to Argentina. 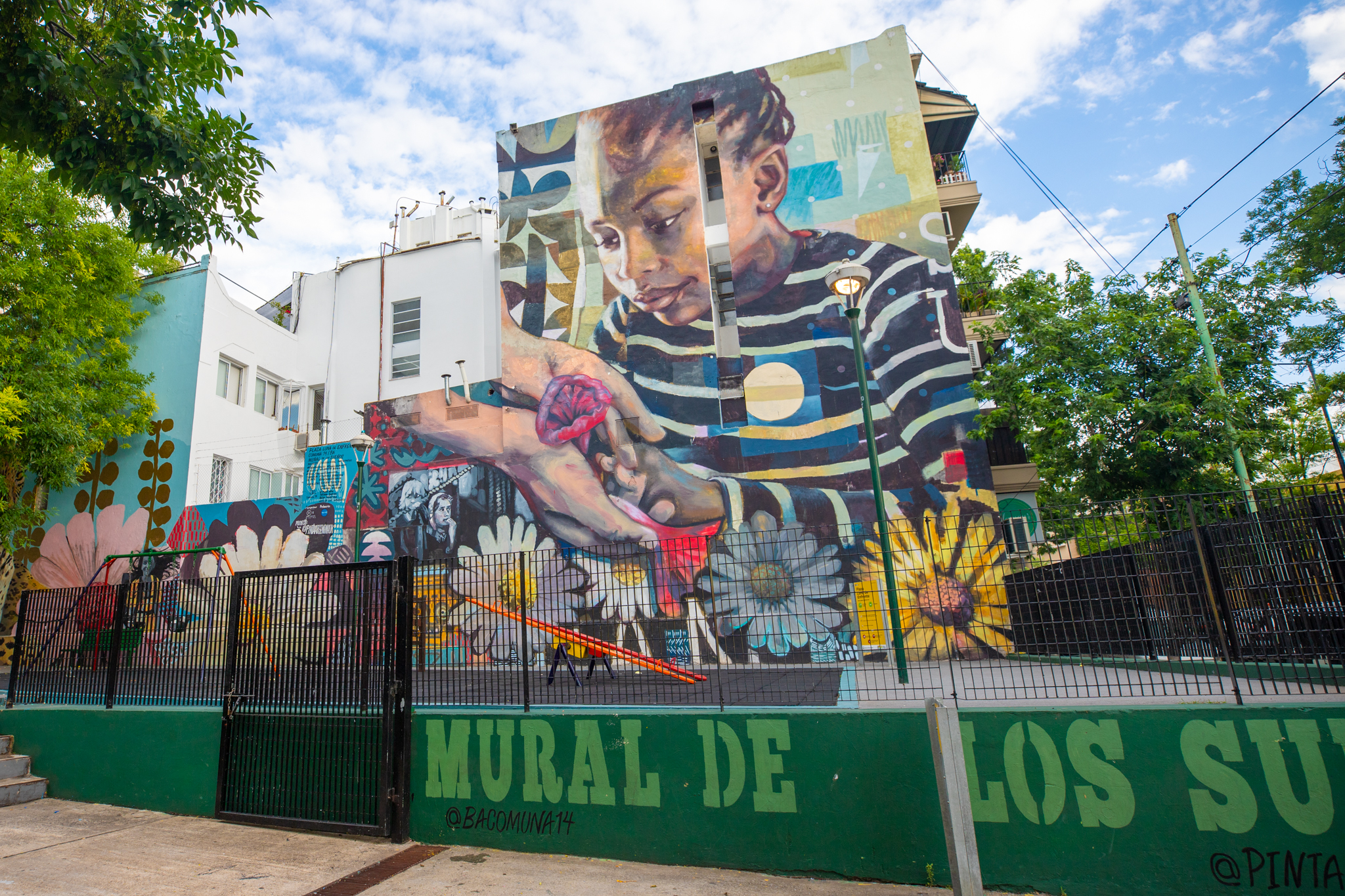 Corner of Jose A. Cabrera + Gurruchaga

Painted by one of the few (but growing!) female street artists in Buenos Aires, this charming and colorful mural in Palermo highlights a variety of Argentinian flowers and plants. 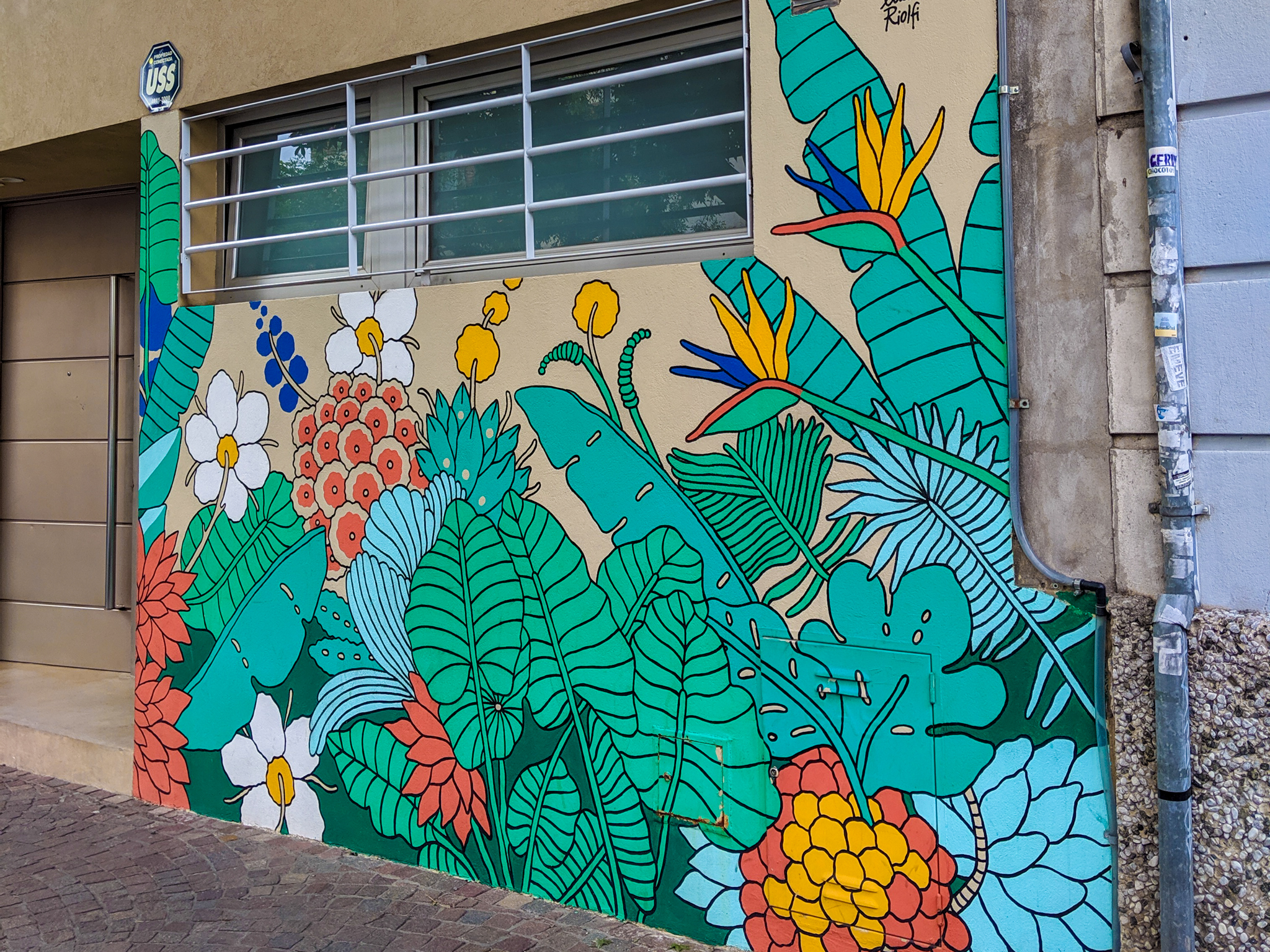 A collaborative piece created by both Ever and Pastel, this colorful mural features a woman among local flora from the Villa Crespos neighborhood. Ever typically does not feature human eyes as part of his style, instead opting to replace eyes with other colorful elements such as a rainbow or waterfall. 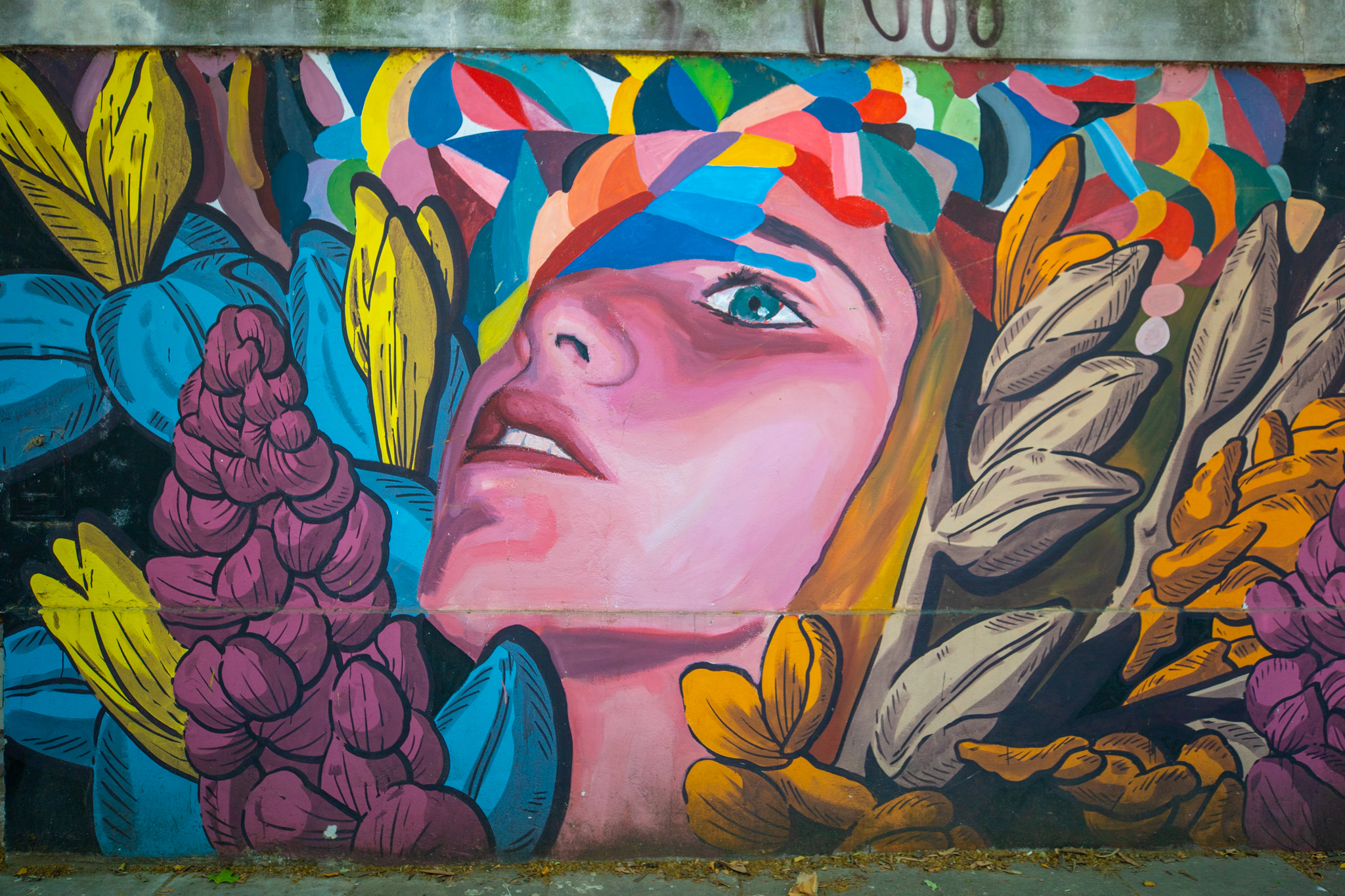 Directly next to the above piece, this mural was painted by Evers as an abstract promotion for the album release of a political music group from Buenos Aires. The piece features mother Earth, Pachamama, overlooking the people of South America, with her eyes as a rainbow kaleidoscope. 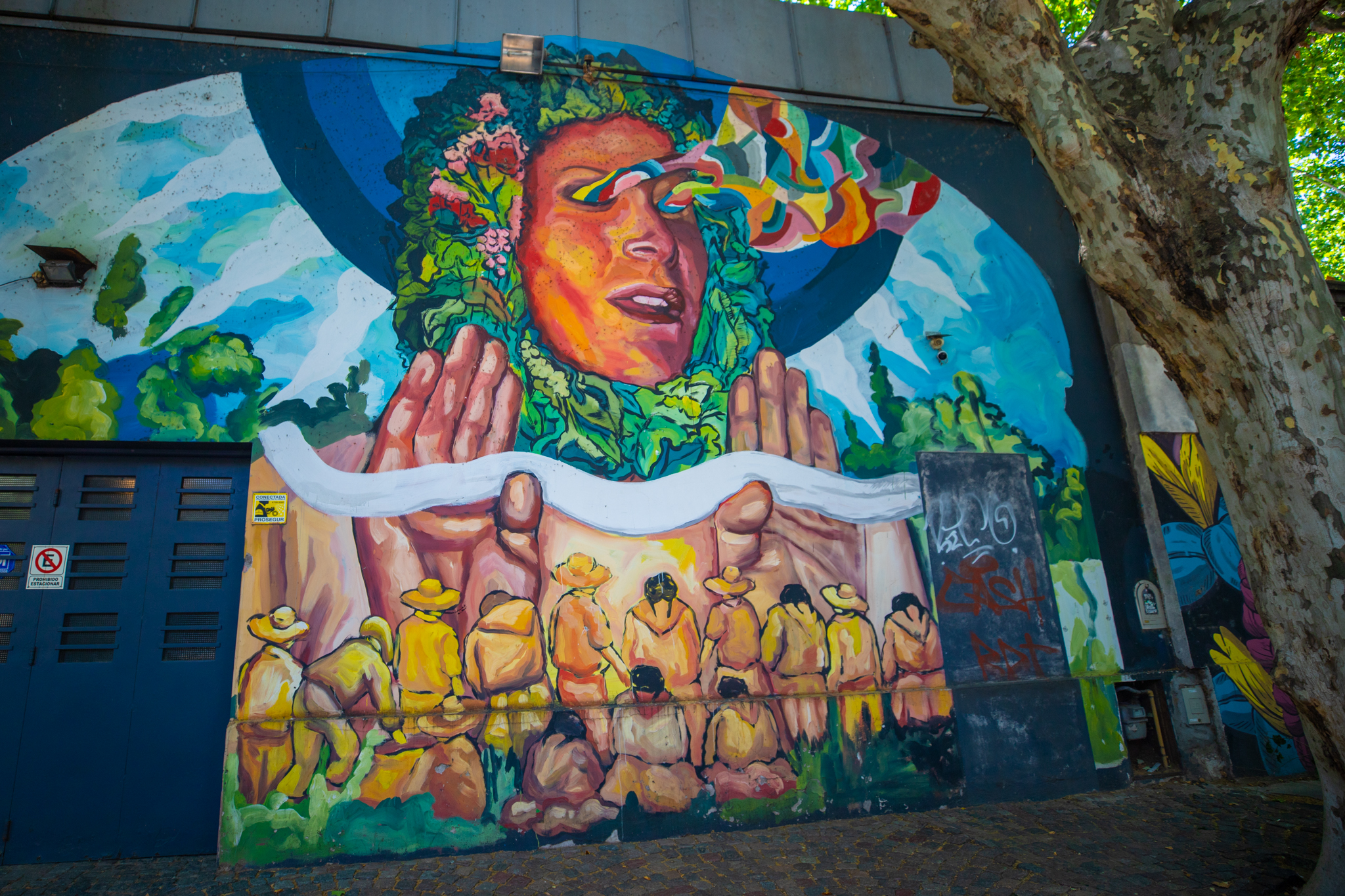 Similar to the Munecismo mural mentioned above, this unnamed mural features a variety of colorful characters layered together by artists from the Greenhouse Collective. The figures are only painted with spray paint showing the skill of these artists with the level of detail. 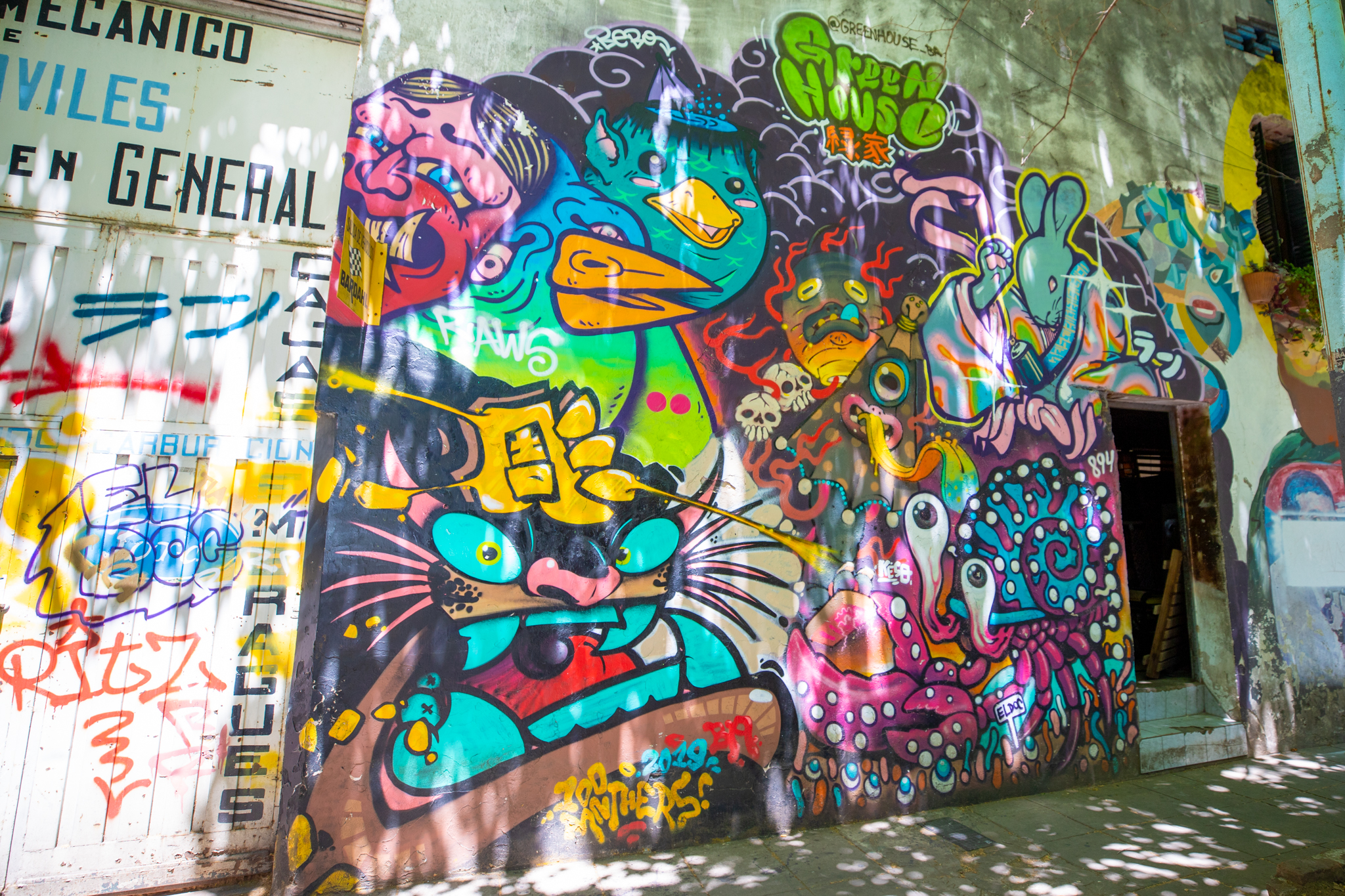 Frustrated by fellow street artists catering the visual desires of the Instagramming public, muralist Ever decided to paint a mural chastising the trend of painting things that will be popular on social media by – painting a mural that would be popular on social media. The artist paints a series of cute kittens juxtaposed with photos of Karl Marx and symbols of capitalism to make a statement about his beliefs on the current state of the dominant global economic system. 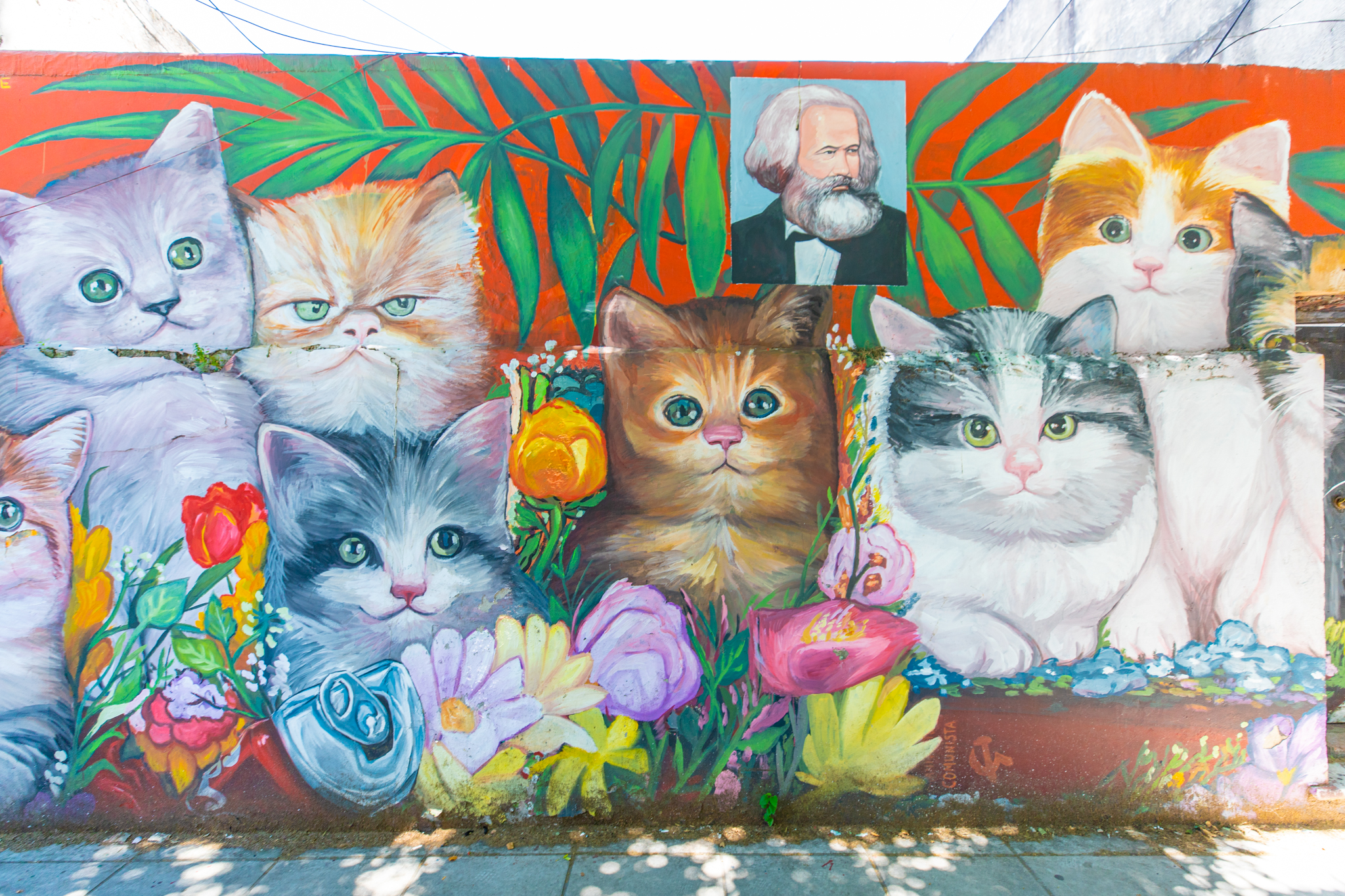 On the Front of Fridha Nightclub

Less of a mural and more of a promotion for the Fridha club it is featured on, this two story piece has become famous on Instagram. It features Frida Cahlo in modern clothes smoking a cigarette among a colorful bed of flowers and flora towering over street below. 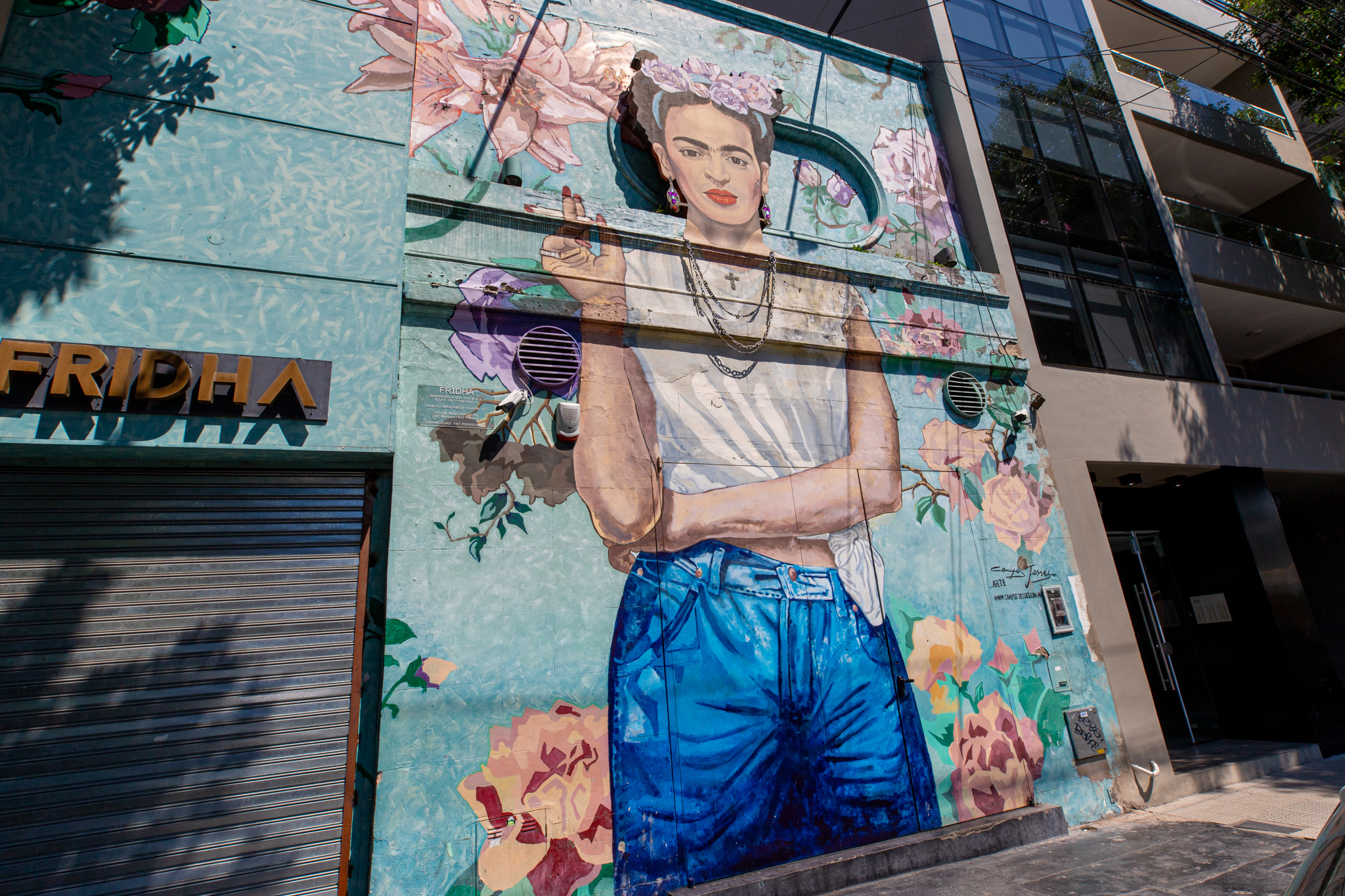 This perspective bending mural in Barracas was painted by Juandres Vera. It depicts one of Argentinian’s favorite pastimes – drinking mate – in a way that lets viewers engage with the mural by posing with the mate straw or “stepping” into the window the woman leans out from. 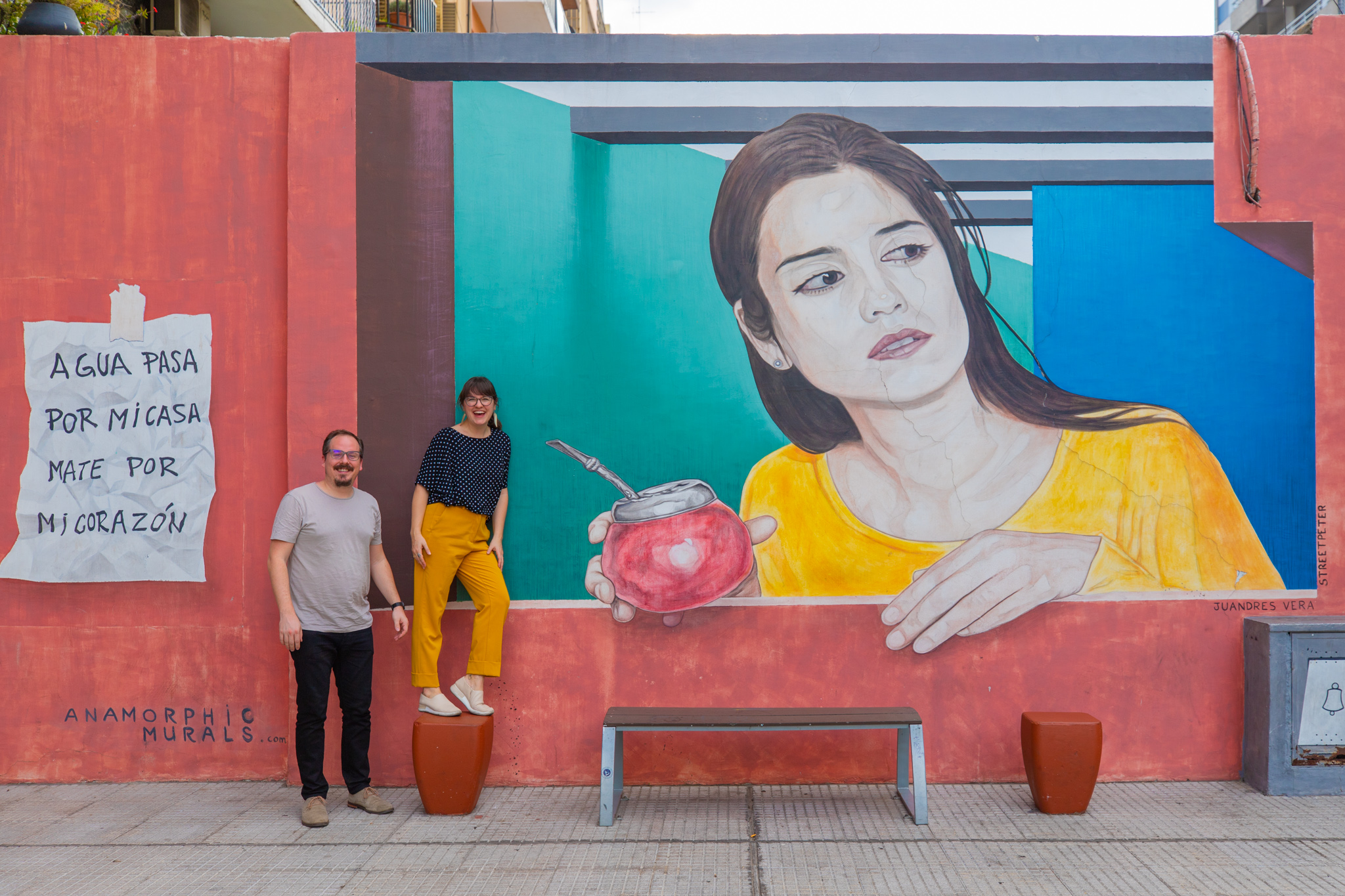 Named the most famous street in Argentina, El Caminito is a tiny street running through the heart of La Boca, a colorful and historic neighborhood on Buenos Aires’s south side. Much of the area around El Caminito has street art, so I would recommend simply wandering around to explore!

Mothers of the Disappeared Mural

During the 1970s – 1980s, Argentina was governed by an authoritarian dictatorship which was extremely repressive to its people. Like other South American countries, one terror tactic used to repress dissent was “disappearing” dissidents. This mural is dedicated to the mothers of disappeared people. These women continue to protest every week in the capital city wearing their now iconic white bandanas. 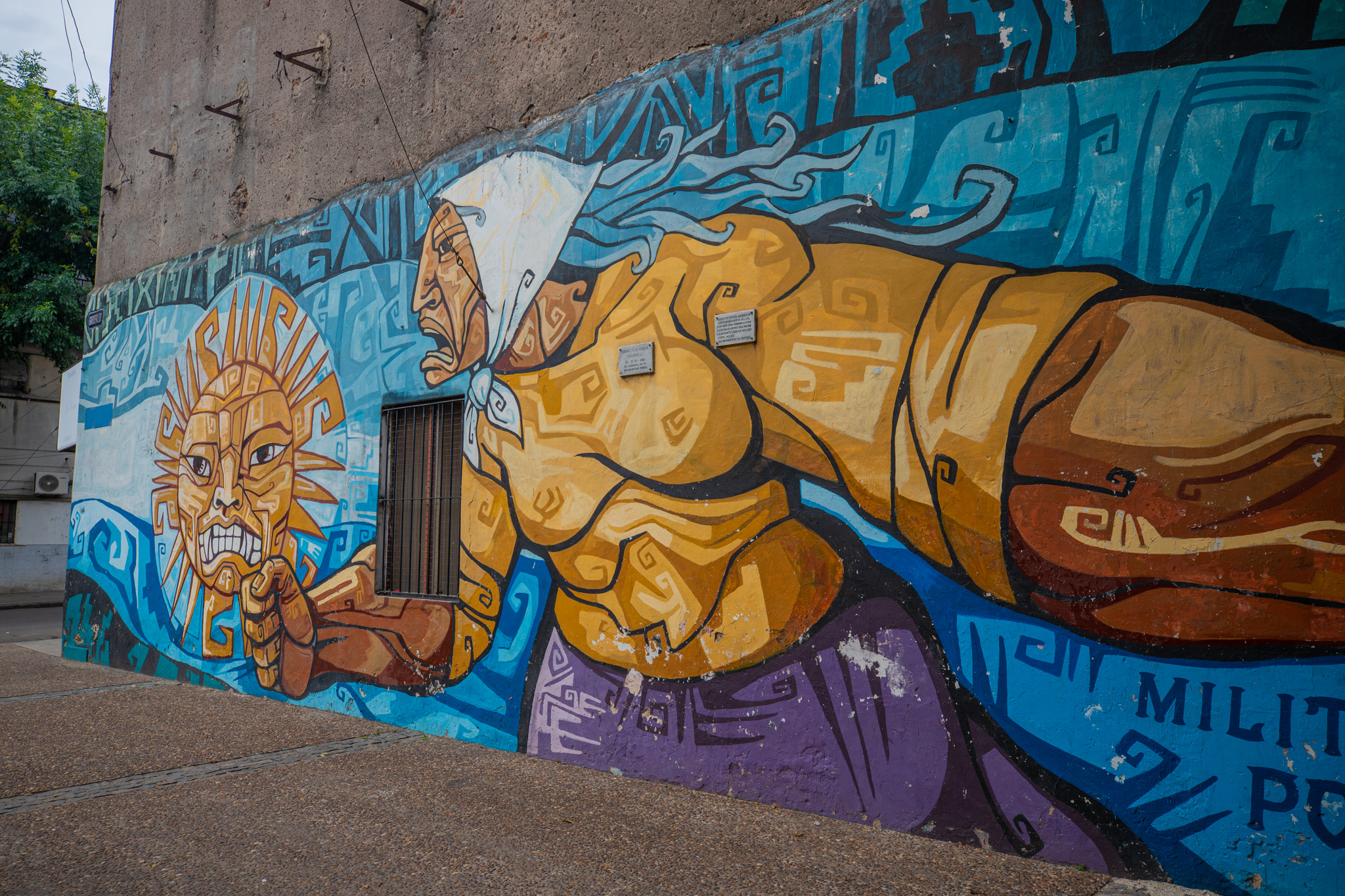 Buenos Aires, and the La Boca neighborhood more specifically, was the first city in South America to create a volunteer firefighting brigade. This mural commemorates the brave men who saved the lives of many of BA’s poorest citizens from fires in La Boca. 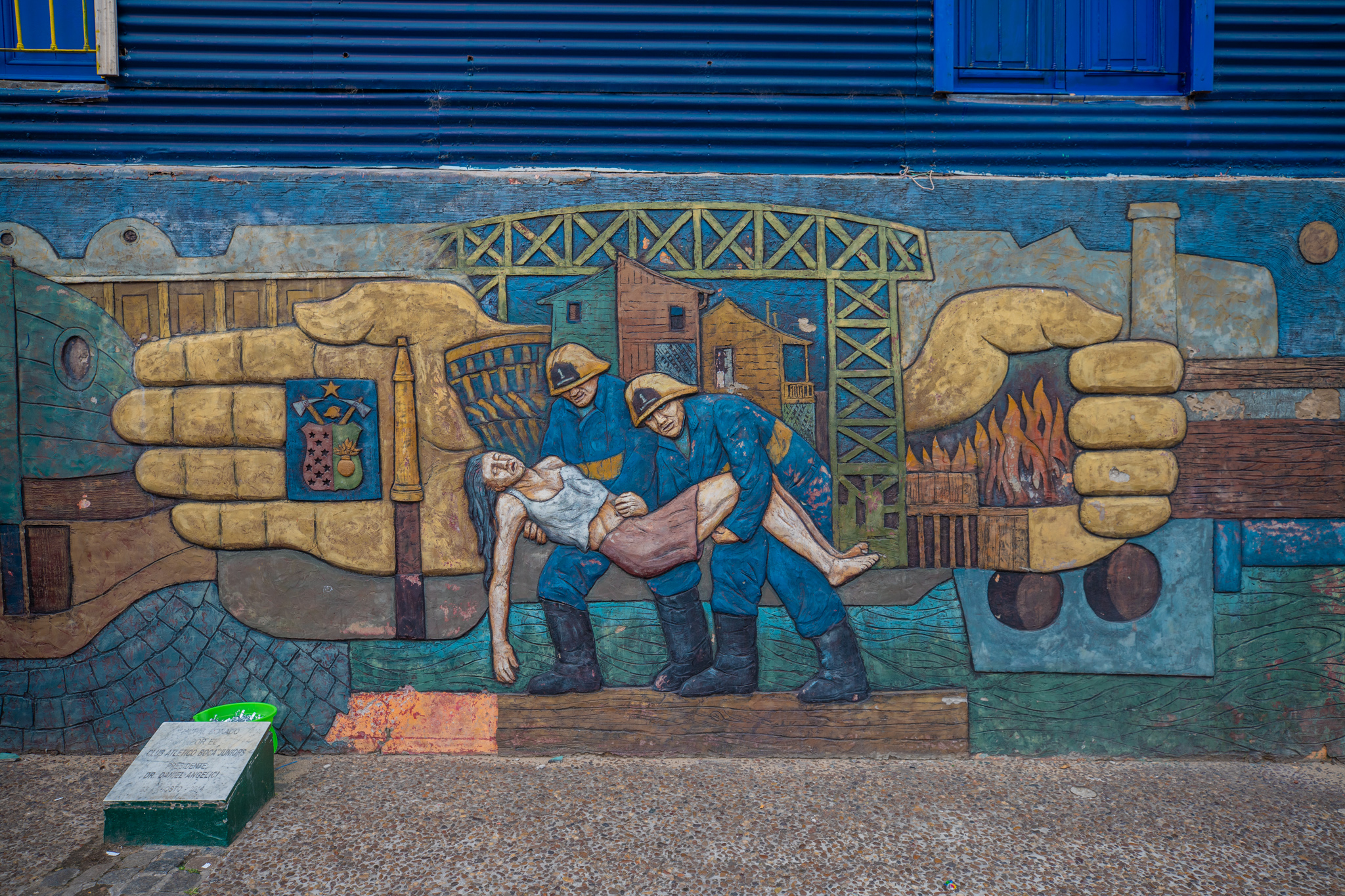 Do you love street art?

Find more of my posts about street art from cities around the world!