10 Japanese Foods to Eat While Traveling in Japan﻿

Japanese food is one of my favorite cuisines in the world, so I was incredibly excited to visit Japan where the main items on my agenda were, big shocker, to eateateat. And maybe see a few shrines, but most just eat all the Japanese food I could. I spent 5 days in Japan eating my way around the islands and loved every second of it!

For many people, their understanding of Japanese cuisine is limited to two dishes – ramen and sushi – and while those two dishes are truly delightful, Japanese cuisine is diverse and regional with a lot more to choose from. I was surprised to learn about countless Japanese dishes that are not widely available in the US. There were a lot of things I had never tasted before!

My love for Japanese food was only reaffirmed after my second visit to Japan, when I made a much more concerted effort to scope out good restaurants in all the cities we visited. To a serious foodie like myself, discovering new foods is like Christmas morning – it is joy in its purest form. The clean flavors, complex textures, and rich broths that I tried in Japan simply spoke to my palate.

Here are my 10 favorite foods I ate while traveling in Japan – and why you should try them too!

This savory pancake originates from the Kansai region of Japan, so naturally, I wanted to try the local dish when I was in Osaka! Okonomiyaki contains a variety of ingredients, but there will always be squid and pancake batter. The pancake is then cooked on a teppan, or flat top grill, and covered with several toppings including mayonnaise, bonito flakes and otafuku sauce. This dish has a sweetness from the otafuku sauce, which is kind of like a Chinese plum sauce, a chewy texture from the cooked squid and a salty fish punch from the bonito flakes. It is unlike any other Japanese fish I had eaten before – at least until I tried some of the other things on this list!

A famous Japanese street food, Takoyaki is widely available throughout the Kansai region of Japan. I saw lots of takoyaki stands on the streets of Kobe and Osaka and it seems to be one of the most popular local snacks! Minced raw octopus is tossed with a light pancake batter and slowly fried on a specially molded circular griddle pan so the mini pancakes come out in perfectly spherical shapes. It is fun to watch the vendors cook takoyaki because they manually turn the balls super quickly using a single chopstick. It requires some talent! The octopus balls are then topped with raw green onions, bonito flakes, and a sweet takoyaki sauce to be eaten on the streets with a skewer. The gooey but chewy texture is different and unpleasant for some people, but I thought the rich flavors made it a super tasty snack!

Breakfast for dinner anyone? Tonpeiyaki is a regional omelet that varies in style across the country, but the most common style is an Osaka-style tonpeiyaki. This is the type that I sampled on a food tour in Osaka and it includes ground pork, squid, and cabbage tossed with beaten eggs and cooked into an omelet. Often cooked on a teppan grill, the savory omelet can be eaten throughout the day, and similar to other Osaka teppan foods, it is typically served with a variety of sauces, like mayonaise and otafuku, which you can cover the omelet with as much or little as you like. There is a lot of play with texture in this particular dish, because you have the meaty ground pork and the chunky chopped squid along with the gooey sauces and firmly cooked eggs.

Raw Fish Served on its own, on top of rice or rolled with rice

It is hard to visit Japan without sampling sushi, nigiri, or sashimi. They are some of the most famous and well-known dishes in Japanese cuisine! Japan is the world’s number one consumer of seafood, and one of the most popular ways to enjoy fish is in the raw format that you see with these three dishes. In case you’re not familiar, the main differences between these dishes is the proportion and style of rice. Nigiri consists of a slice of raw fish over pressed vinegared rice while Sashimi refers to just slices of raw fish and finally, sushi rolls are fish, sauce and typically vegetables rolled in a thin layer of pressed rice. I eat sushi somewhat frequently at home but I have never had anything as fresh and high quality as what I ate in Japan. It is such a delicious and incredible experience! 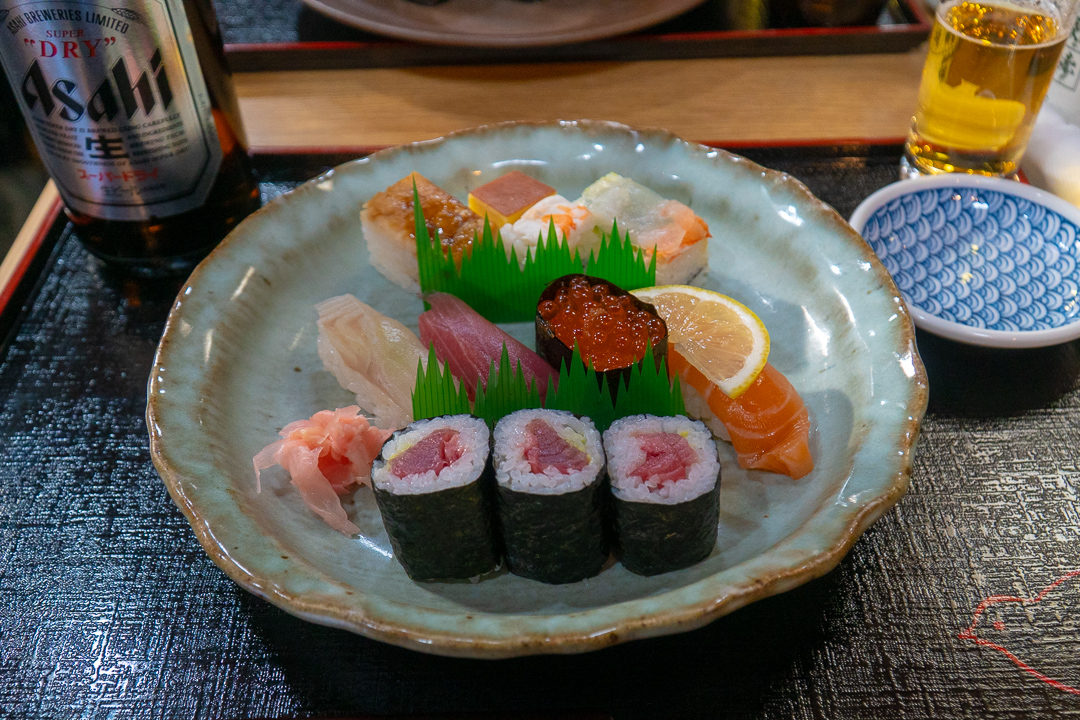 Similar to other protected foods like champagne or port wine, Kobe beef comes from the Japanese Black cattle, and it has to be raised in the Hyōgo Prefecture following specific and regulated rules in order to be called Kobe Beef. The meat is an expensive and high-end delicacy that is valued for its flavor, tenderness, and well-marbled texture. As soon as Sam found out that we were going to port in Kobe, he wanted to go to a Kobe beef steakhouse. We have had wagyu beef in the US before, but it’s not quite the same as the traditional Japanese tender beef. What was particularly cool about eating Kobe Beef in Kobe is that you can really select the range and quality of the beet cuts that you choose, so you can keep it within your set budget.

For our steak dinner, we went to Sumibi Yakiniku Goemon Sannomiya on a tucked away alley in central Kobe. Sitting on the floor in a traditional enclosed Japanese booth, we enjoyed one of our favorite meals of the trip thus far, with cuts of beef ranging from belly, tenderloin, and cheek along with an incredible seasoned salt and house made miso soy sauce. It is common to cook and season your own beef tableside on a teppan or grill to ensure that it is cooked exactly to your preference so you know I lathered mine up in the delicious house sauce.

Noodles in a Meat Broth

Perhaps my favorite of all the dishes on this list, ramen is a rich noodle soup that consists of quickly cooked wheat noodles in a fish or meat broth and typically topped with some vegetables, a slice of meat, a soft boiled egg and green onions. The ramen craze is in full swing in the US right now, and I’ve had some excellent bowls of ramen in Chicago (looking at you High Five Ramen!), so I was particularly excited to explore this side of Japanese cuisine while traveling in Japan. I quite literally ate a bowl of ramen every single day while in Japan. I just love this dish and it was winter in Japan at the time, so it made sense!

I learned from a local diner that it is best to sample the broth of the ramen first, which is where most of the flavor is, and only after sipping some broth, should you start eating the toppings and noodles. I sampled creamy chicken broths and soy miso sauces and fatty pork broths, and I am happy to say I enjoyed every bowl I tried; but, my favorite was at River Ramen in Kyoto where you can sit at one of their 15 seats after buying for your ramen with a vending machine!

I first learned about Buddhist cooking on an episode of Chef’s Table on Netflix and have  been curious about it ever since. Basically, Buddhist cuisine involves a strict dedication to ingredient integrity and is almost entirely vegetarian, since Buddhists believe in reincarnation and eating animals is believed to decrease your karmic chances of moving forward in your reincarnation cycle. Buddhist cuisine uses traditional cooking styles, such as fermenting and boiling, and tends to be fairly mild in flavor. I sampled several different Buddhist dishes in a bento box, including tempura vegetables, pickled tea leaves, tofu soup and miso eggplant.

Udon Noodles in a Thick Stock

In a similar family as ramen, udon is also a noodle soup-like dish. Udon noodles are thicker wheat flour noodles that are typically served in a more gelatinous hot broth. Kake udon is one of the oldest and most famous styles of udon, which I sampled at Honke Owariya restaurant in Kyoto that dates back nearly 600 years! The broth of kake udon is much more mild than ramen, typically made from a dashi base. Just as hearty and warming as ramen, I thoroughly loved my bowl of udon!

Served in a variety of desserts, sweet bean paste is a popular Japanese flavor that you’ll find in everything from ice cream to crepes to croissants. This looks similar to chocolate so don’t get them confused if you are in the mood for a sweet treat! Sweet bean paste definitely has the bean texture you’d expect, but I find it to be a pleasant and tasty flavor similar to fig or date. Picture the inside of a fig newton and that’s kind of similar! One of the most common ways that I saw it served was stuffed in between two pancakes shaped into a fish, which is called Taiyaki. You can find this famous street food all over the country!

If you’re looking for the most Instagrammable dish on this list, the bright green color of matcha tea ice cream is probably your best bet! Widely available throughout the country, this mild and slightly bitter ice cream is a perfect complement to the end of any meal, because it is not too sweet to make your stomach hurt but also scratches that dessert itch. Typically served as soft serve, the swirly little cones can be purchased on the street or in ice cream parlors. 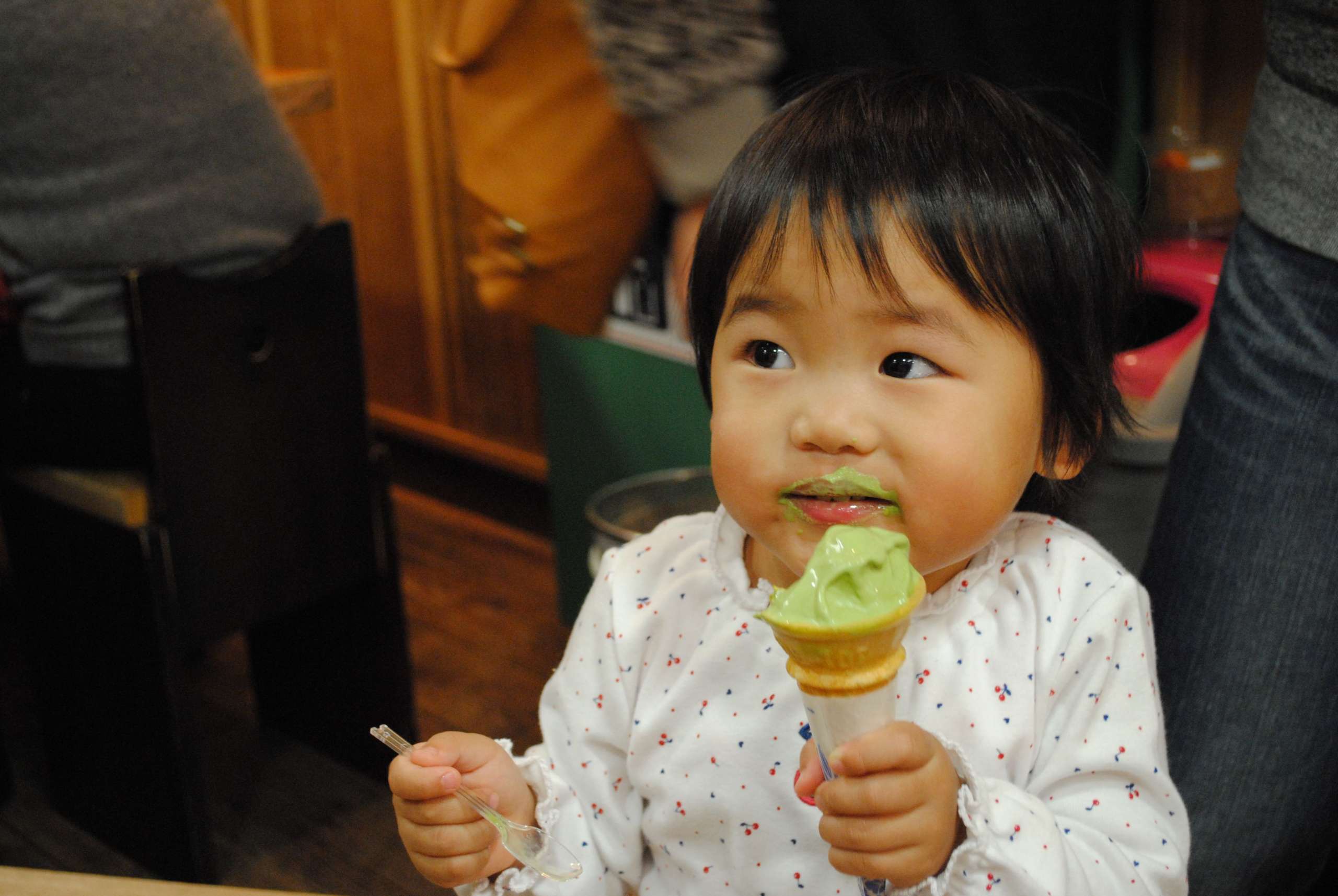 What foods did you try and love while traveling in Japan? Comment below with your favorites!