Culinary Backstreets: The Street Food Tour You HAVE TO DO in Mexico City

May 8, 2018 Honest Reviews + Suggestions, Mexico, Where to Eat Abroad 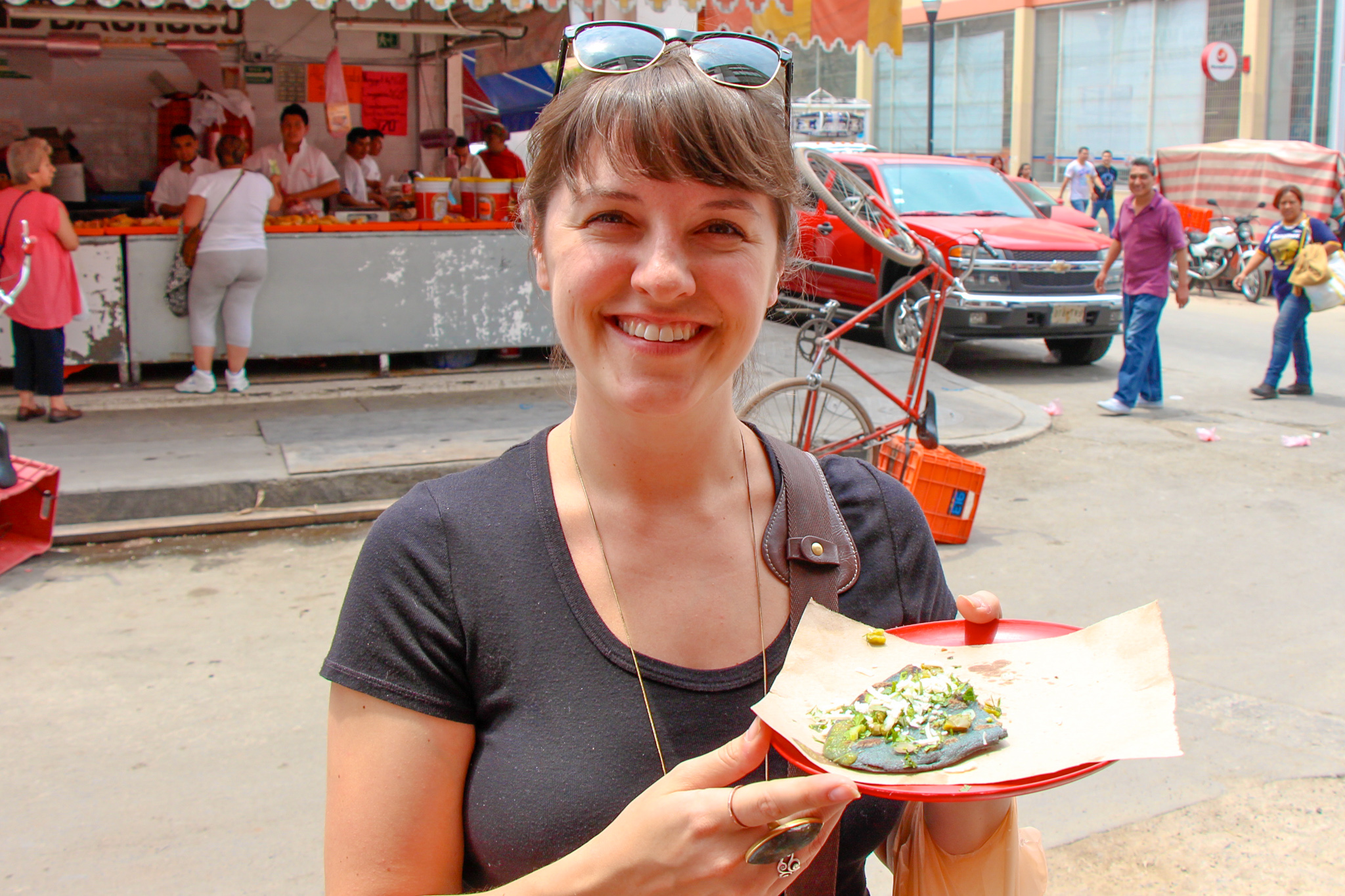 Although Mexican food is often known simply for tacos & tortillas, the cuisine is far more complicated – and delicious – than an initial glance over might presume. Mexico is probably the country in the Western hemisphere with the deepest and most profound culinary traditions. With such a rich culinary history, it would be a shame to travel to Mexico and not take some sort of food tour. There is SO MUCH MORE to Mexican cuisine than the average American traveler know.

I highly recommend doing a full-day food tour with Culinary Backstreets. Their tours focus on what they call the traditional side of “urban culinary life”, exploring family run restaurants, street vendors and the unsung (but talented!) home chefs. I have done both their downtown market tour and their Xochimilco food tour in Mexico city (see the video below for an insiders view!) and I can easily say this is the best street food walking tour in the city. Their tours are the most fun and informative food tours I have ever been on! Their tours are not cheap, but they are worth the steep price because they will take you behind the scenes and behind the fame of all the best local spots in the city.

Mexico City, locally known as DF, has a bustling food scene, which to a foreigner, is incredibly overwhelming. I am so grateful that I did the Centro Historico Culinary Backstreets tour, because I would have had no idea where to start otherwise. We met our tour guide directly in front of the Palacio de Bellas Artes, DF’s opulent arts center located right in the center of the city. He gave us a brief run-down of Mexico’s culinary history as we wandered our way through the busy streets, headed towards on the city’s main food markets.

On the way, we stopped at one of DF’s oldest coffee shops, still owned by the original family that started it at the turn of the 20th century. They roast the beans fresh every day right in the window, so the aroma of the coffee is absolutely divine.

Our first food stop was at a seemingly basic seafood restaurant, which from the outside looked like nothing special. One of the owners greets us with a platter of ceviche & tostadas alongside a fish broth soup. The crispy fried tostadas were topped with an octopus crudo that was so acidic and fresh, I gobbled it up. The whitefish ceviche was slightly sweet with a spicy habanero burn that was just the right amount of hot. Finishing off with the salty, briny warmth of a fish broth cleansed our palettes as we headed to our next stop. 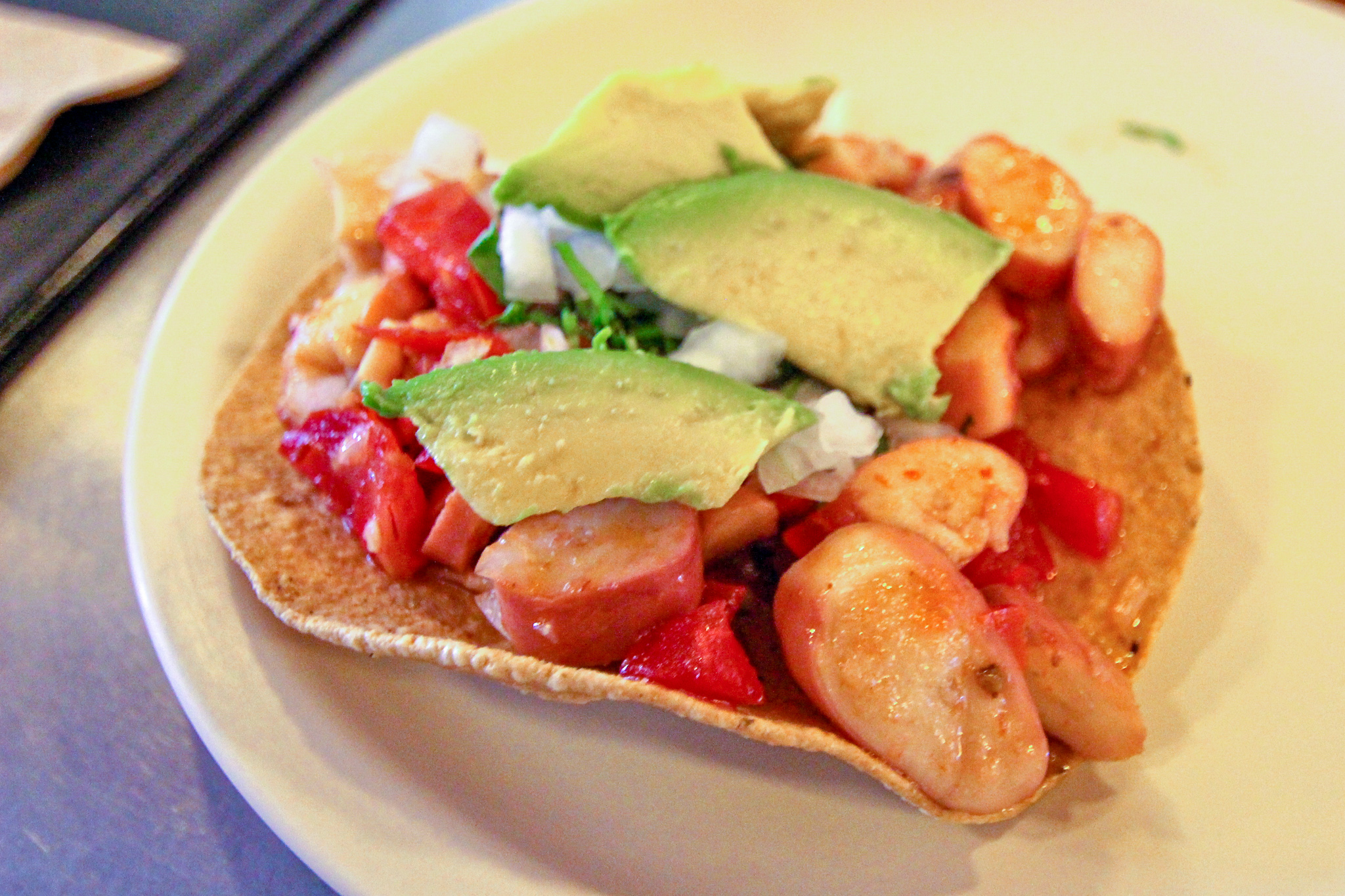 It’s quite common to see a variety of sauces on a Mexican table, and along the walk, our tour guide explained that Mexican food is hardly ever served as a complete dish. Eaters are welcome to add whatever hot sauce, onion/lime toppings or salsas they like. It’s quite focused on the tastes of the individual diner, and would not be seen as rude to salt or pepper your dish in the same way it might be seen at a fine dining restaurants US.

Tortas were our next dish, served straight out of a storefront window. The gregarious chef was thrilled to see 6 young women come up to order his sandwiches, and cheerfully teased us as he pressed our tortas right in front of us. They served a few different types of tortas, but the one we ordered was stuffed with a meat that I don’t usually associate with Mexican cuisine – turkey! Whole roasted with Mexican spices and herbs, the turkey meat was so tender and juicy, and after tossing on some house made hot sauce, my torta was hitting the spot! 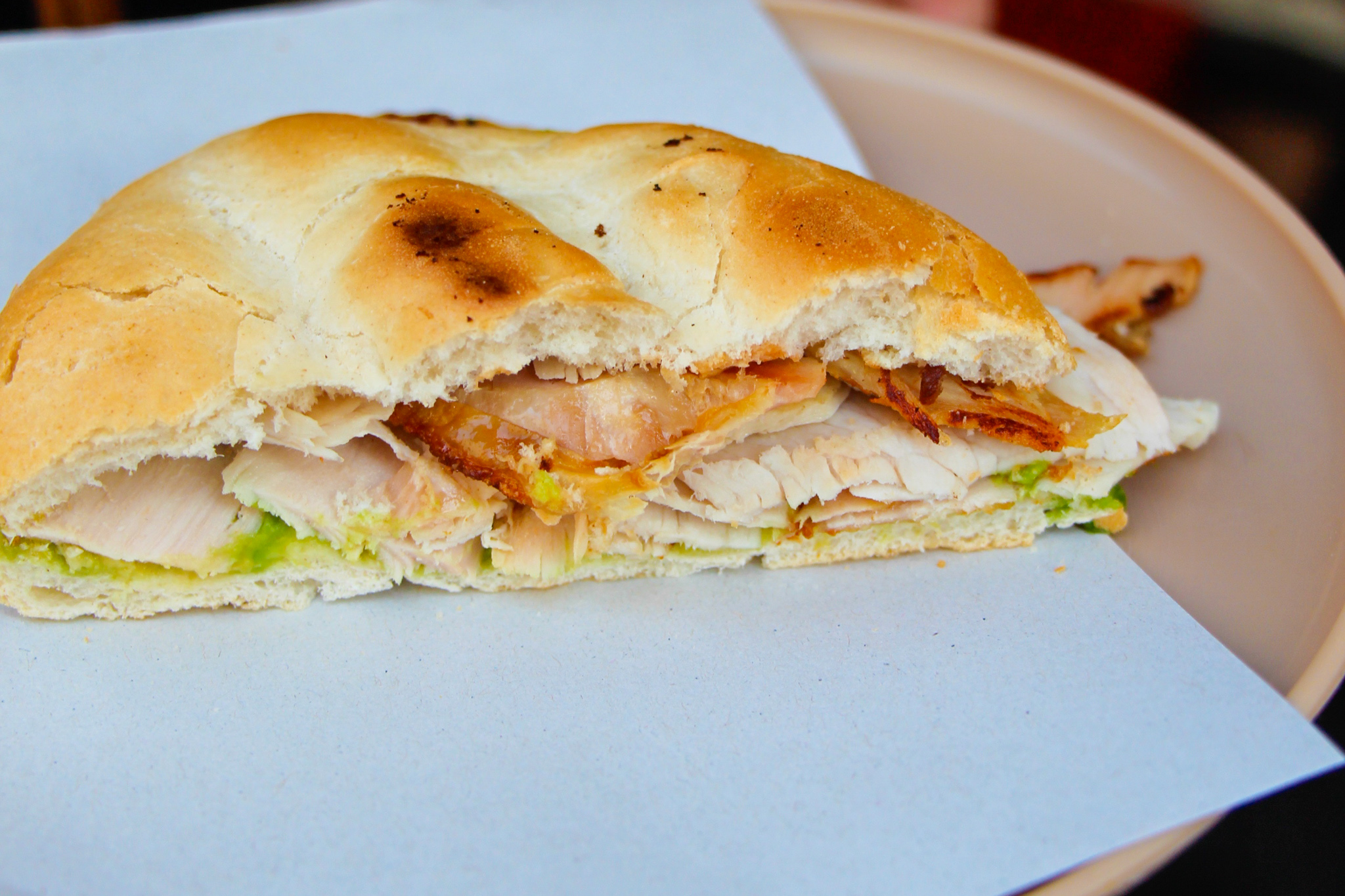 We continued to wander around the shops near the market on our culinary walking tour, when walked into the most delicious smelling tortilleria. Every day, this tiny little shop pumps out 2,000+ handmade tortillas for DF residents. A staple ingredient of Mexican cuisine, local people pick up fresh ones nearly every day! We tried one just with salt and lime, and wow, I can’t believe how much flavor we miss out on with our tortillas in the US. They were nothing compared to these ones.

The highlight of the tour for me was visiting the food & meat market. This is a fully functional local market, visited by DF residents rather than tourists, which means, you’re seeing Mexican ingredients in their rawest forms. The were stalls literally skinning and butchering fresh meat (something I had never witnessed before) next to stalls selling fresh vegetables. It was strange seeing carts of dead goats rolled down an aisle filled with fruits people were just eating right there.

Nonetheless, the market was full of new food to try. We experimented with flavors from Oaxaca, one of the most culinary states in Mexico, including toasted crickets! We sampled from freshly roasted Mexican espresso, and ate handmade mole from a woman who’s been cooking it for over 50 years. We got a history lesson on chiles and how different flavors can be brought from the same chile through the drying and aging process.

At the fruit stand, I tried so many different types of fruits that I had never even seen before, let alone heard of. We also got a sample of Mexican cheese, which as a ched-head, I very much appreciated. I was surprised to learn how many different types of cheese they produce, considering the only Mexican cheeses I had ever had before were soft cheeses. Nope, they’ve also got hard cheeses and aged cheeses too, and they are indeed delicious!

The market also has lots of “restaurants” which are basically 5 seat counter bars run by 1 or 2 people serving up “plates of the day”. I could tell this was a popular spot for Mexicans to grab lunch because it was pumping with people at 1:00pm when we were wandering around. Lots of the spots were selling similar fares but clearly, people had their favorite shops. We sampled some cooked food here as well, including pozole soup and empanadas.

For our final stop on our food walking tour in Mexico City, we headed to a pulqueria. In case you’re not familiar, which I certainly wasn’t, pulque is an indigenous Mexican alcohol that is made from fermented agave. For many years, it was a blue collar, working man’s drink and was basically shunned out of existence, until recently, when the Mexican hipster movement started to think it was cool again. It has a creamy milk color and the consistency of snot — viscous, gooey and sticks to your throat. Appetizing right? It smells HORRENDOUS, like rotting vegetables, but actually tastes kind of decent. Think of a hybrid between kefir yogurt and kombucha to give you an idea of what it’s like. 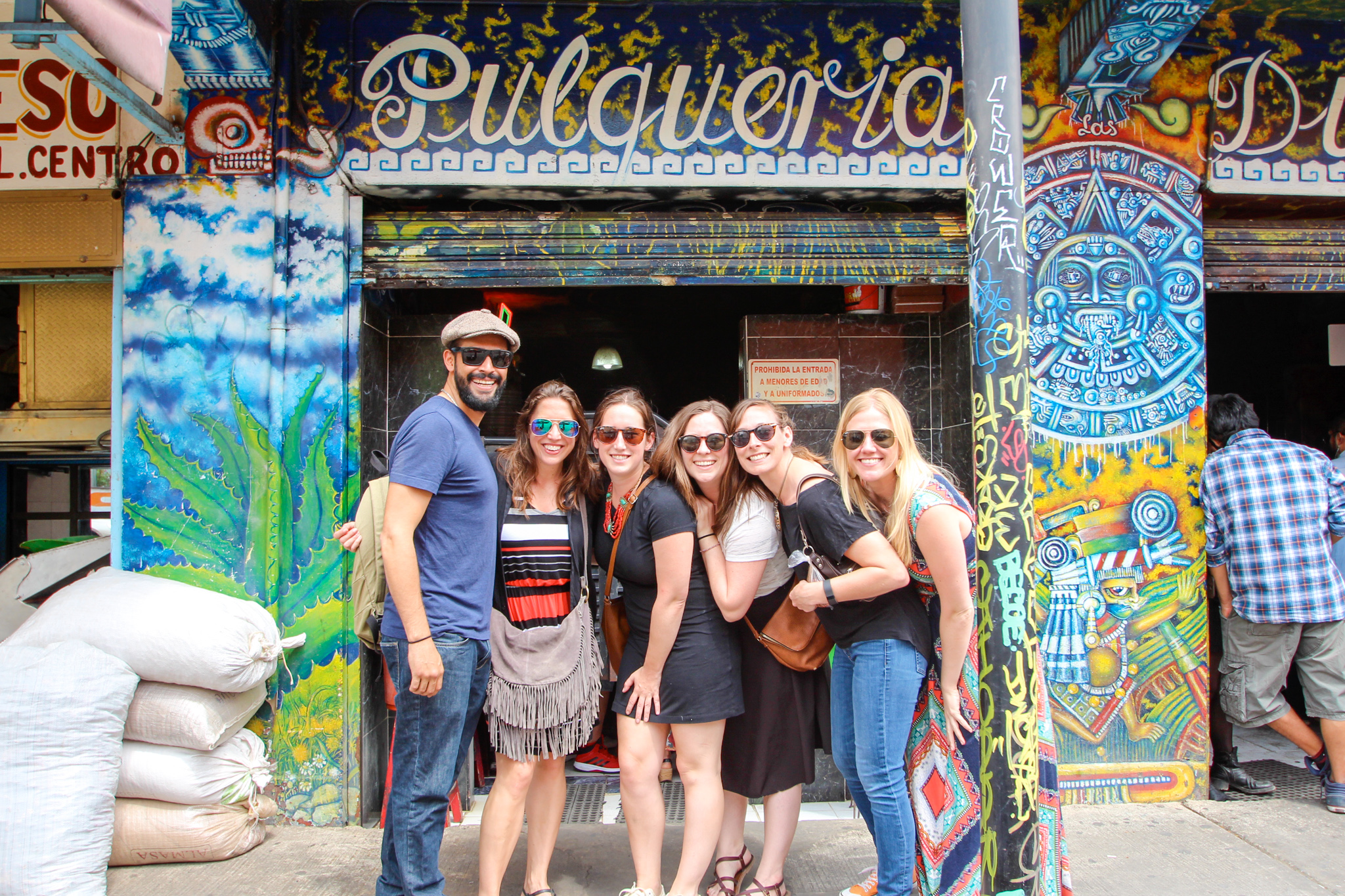 We visited Pulqueria Duelistas, one of the original pulque joints, and it was absolutely packed. We were definitely the only foreigners there! The pulque comes in different flavors, mostly tropical fruits, and gives you a slight buzz but less like and alcohol buzz and more like a sugar buzz. After our tour guide described it, I was a little hesitant to try it, but was surprised when I actually kind of enjoyed it! It was surprisingly refreshing on a hot day, and the weird texture kind of grows on you. To be honest, at the end of the tour, I wasn’t ready to be done yet!

I could have easily eaten more delicious Mexican street food (even though I was totally full) and learned more about Mexican cuisine. Culinary Backstreets did an amazing job educating us while also giving us a memorable and delicious experience. This street food walking tour was one of the highlights of my trip to Mexico, and in fact, I loved it so much, I have already booked a Culinary Backroads tour in Lisbon during my honeymoon! Here’s to more food adventure abroad! 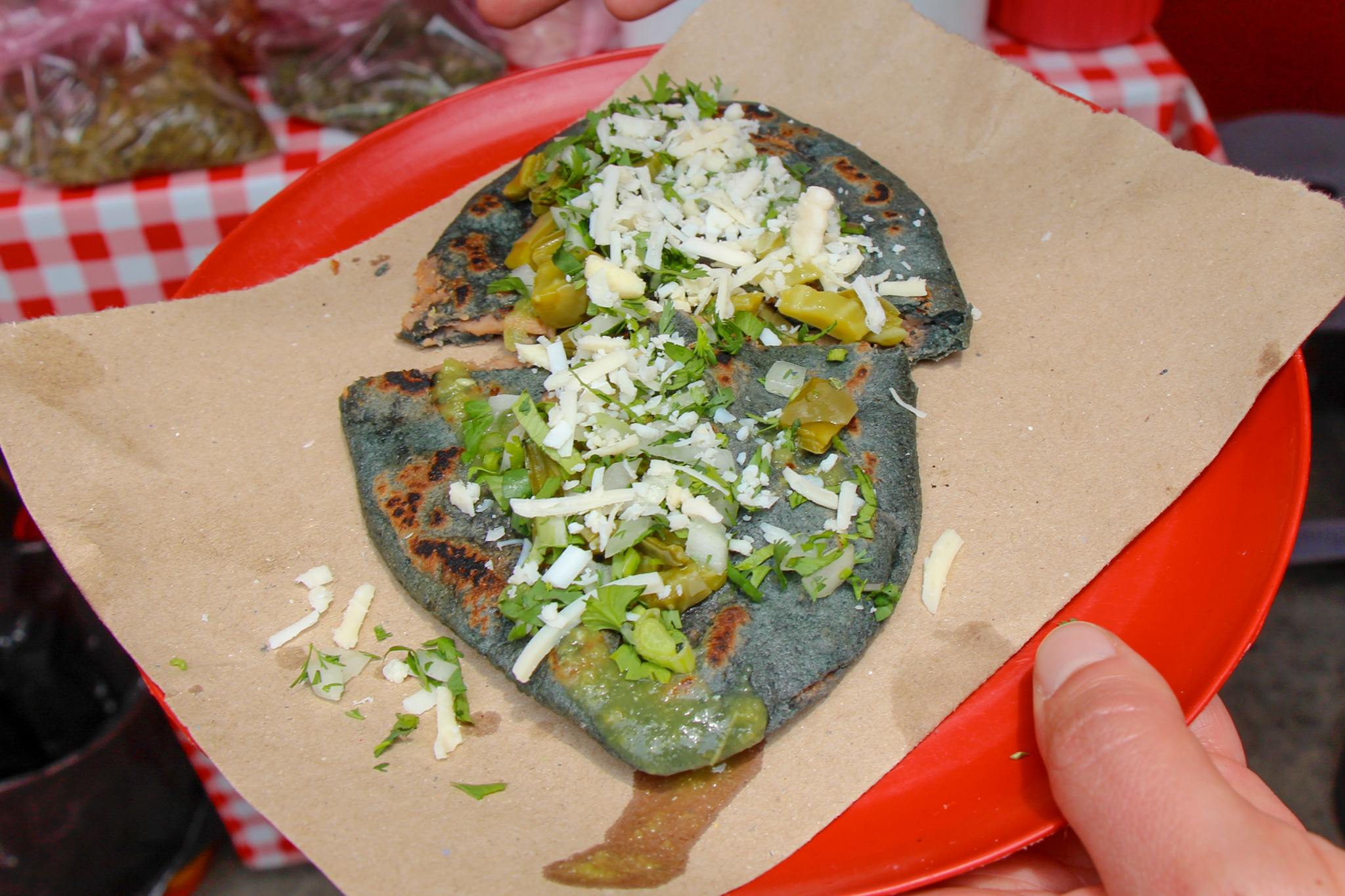 Have you ever done a food tour? What did you love about the experience? Comment below! 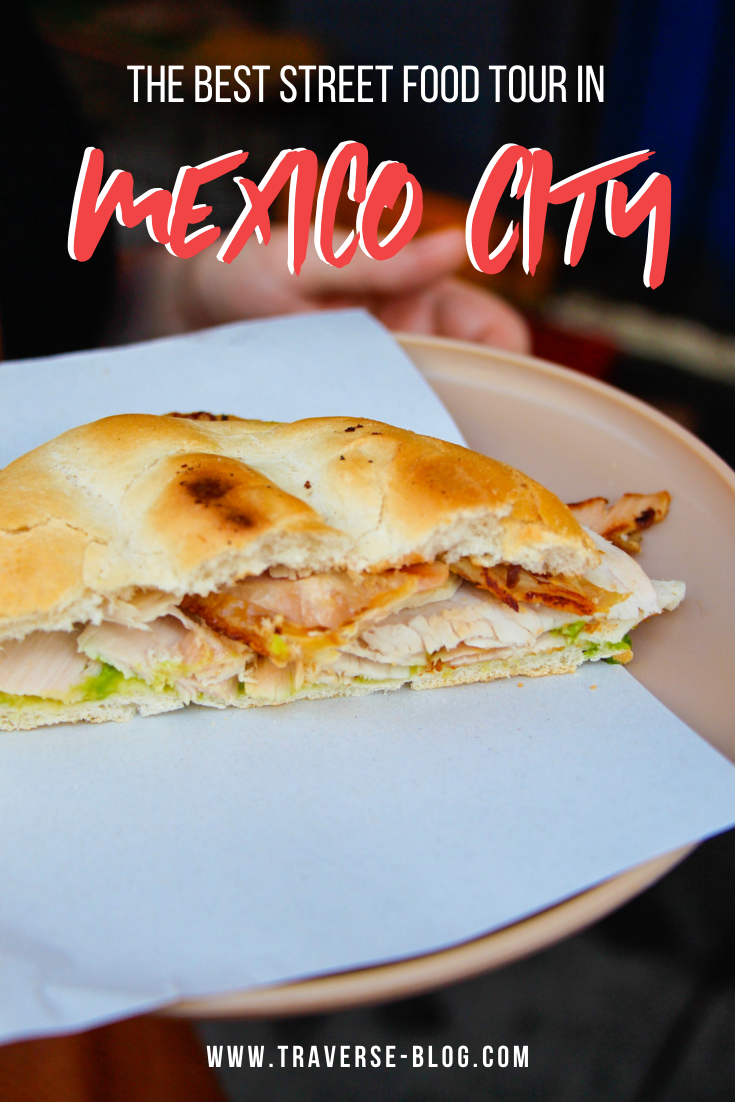