How to See the Best of Leipzig, Germany in 2 Days 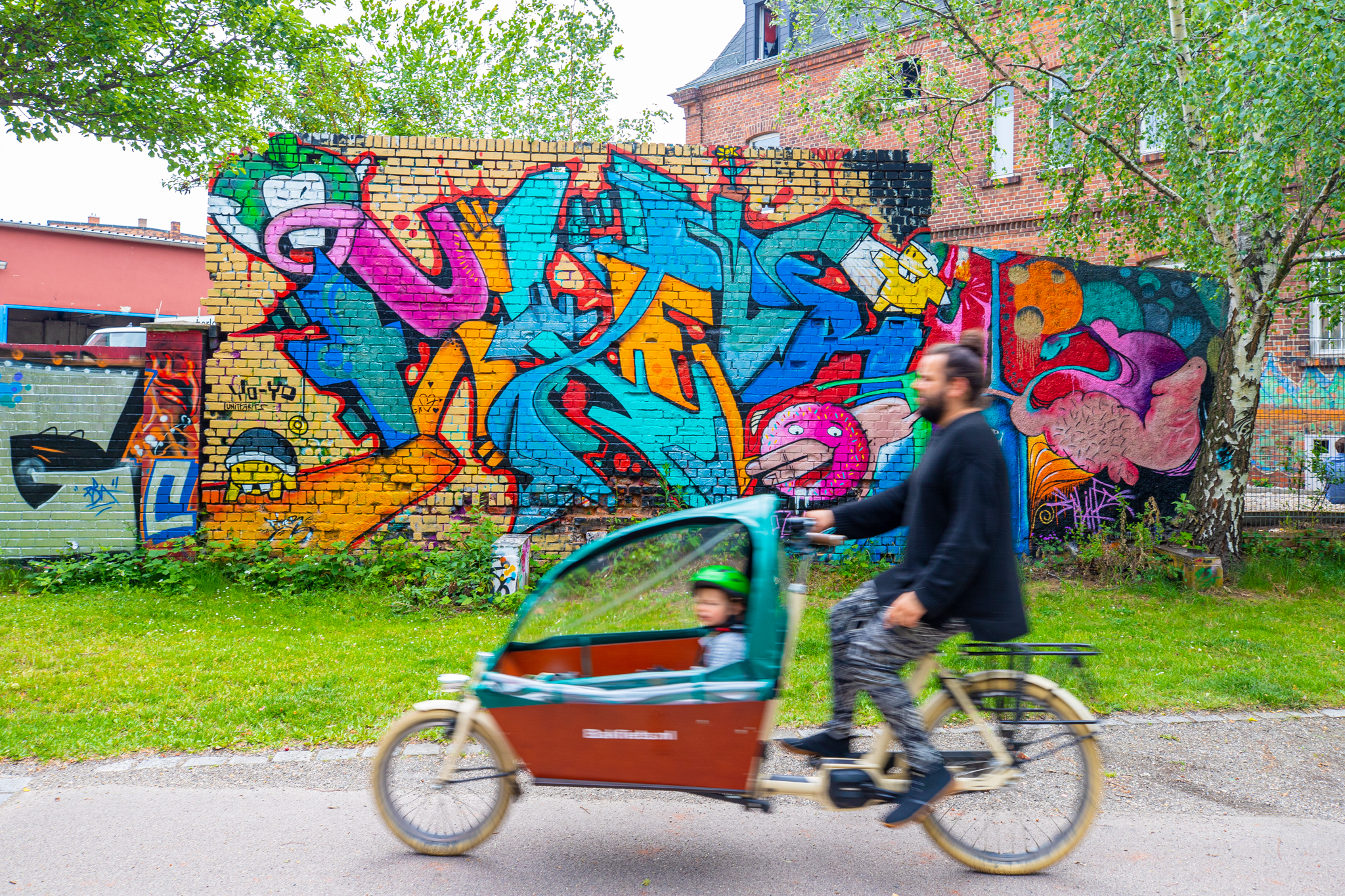 After the 30th anniversary of the fall of the Berlin Wall last year, we are reminded of the historic role that Leipzig plays in German history — it is the city where protesting against communist rule first started, ultimately leading to the collapse of the USSR’s control over east Germany. Leipzig also has the distinct honor of being one of Germany’s loveliest cities which is ideally seen in two days.

We explored Leipzig as part of a one week trip in the state of Saxony. While Leipzig has plenty to enjoy, I think it works well as an add-on to a larger eastern Germany itinerary. I am not sure if it is worthy of its own trip, unless you are doing it as a city break getaway from the larger cities in the area like Berlin, Prague or Dresden. Regardless, over the course of 48 hours in Leipzig we got to experience the beautiful architecture, delicious local beer, and funky art scene of this under-the-radar German destination.

How to Spend a Lovely 2 Days in Leipzig

Start off your first morning in Leipzig with a cup of coffee from one of the cities most historic coffee houses, Zum Arabischen Coffe Baum. This multi-cultural coffee house mixes Arabian, French and Viennese cafe cultures into something uniquely Leipzig. If that place is closed, wander over to Cafe Bigoti for some great Italian espresso. Also around the corner is Ganos, perhaps the most stylish coffee vendor I’ve ever seen. It was only open for takeaway and bags of beans because of COVID, but the selection is something otherworldly! Plus they have shipping around Europe.

Leipzig is steeped in Germany’s cultural history, particularly with regards to art and music. Bach, Mendelssohn, and Wagner all lived here and the city has the oldest civic orchestra in the world, demonstrating Leipzig’s deep love for music. We unfortunately visited shortly after the COVID reopening, so no orchestra concerts were available. However you can visit the Bach Museum to learn about his importance on classical music and maybe even catch one of the nightly 7pm organ concerts at St. Thomas Church across the street which houses one of Bach’s original instruments. 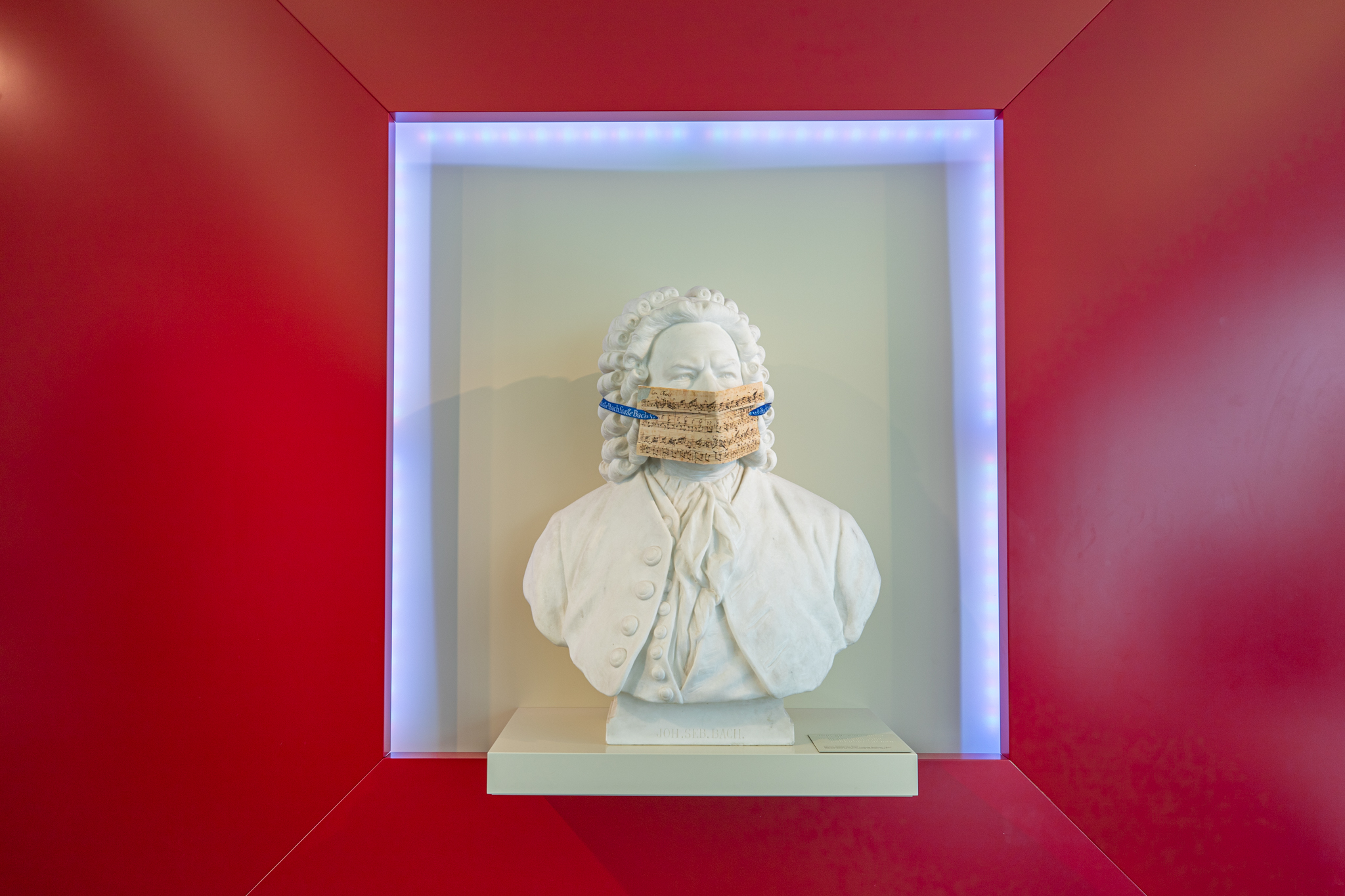 Leipzig’s altstadt was largely protected from destruction during the war because it has historically been a university city not a strategic or industrial city, which means that much of the original architecture still exists. And boy is it beautiful!

Start your walking tour of the old town near St. Thomas Church and proceed south along Burgstrasse until you reach the tower-topped New Town Hall. The best view of it is from Lenné Park. A little further south is Federal Administrative Court which has an especially imposing façade.

Heading back up towards the city, take a peek at the University of Leipzig’s beautiful campus. The main Marktplatz of the city is a stunner with a colorful astronomic clock tower. Just around the corner, marvel at the gilded details and reliefs on the exterior of the Commerzbank building on Thomaskirchhof. Finally, don’t miss out on St. Nicholas Church whose pastel painted interior is completely decked out in stucco ornaments.

All around the Altstadt you’ll find pedestrian passageways filled with unique shops and restaurants. Some of them are quite beautiful and I recommend wandering through when you stumble upon them, especially the Madler and Specks Hof passages.

No trip in Germany is complete without a visit to a brauhaus. This is such an essential part of German culture! Plus, the food varies regionally with differences in the flavors and preparations of core German cuisine like sausages, potatoes and schnitzel.

In the Altstadt, I would recommend checking out the historic 16th century brauhaus, Auerbachs Keller, which is clad in paintings depicting the famed German poet Goethe’s Faust. Another great option is Reinhardts im Gasthaus Alte Nikolaischule. Built into a former secondary school, this massive restaurant also has a spacious patio overlooking the St. Nicholas Church, offering a delicious assortment of local dishes like potato dumplings. It happened to be white asparagus season during our visit, so nearly all of our dishes included locally-grown asparagus.

Make sure to try some of the local beer of the Leipzig area — Gose. Gose beers are typically light in color with a citrusy sourness and an herbal clean finish, which is especially refreshing if you are visiting Germany in the summer. I was already familiar with this style of beer prior to coming to Germany because I enjoy sour ale style beers, so I was super excited to try the real thing!

You’ll find Gose at most of the restaurants in the Altstadt but I particularly liked the local one at the Bayerischer-Bahnhof Brauhaus is built into a former train station with a beautiful tree covered garden. To sample the original Ritterguts Gose, head to Kaiserbad, a beer garden and restaurant in the trendy Plagwitz neighborhood. 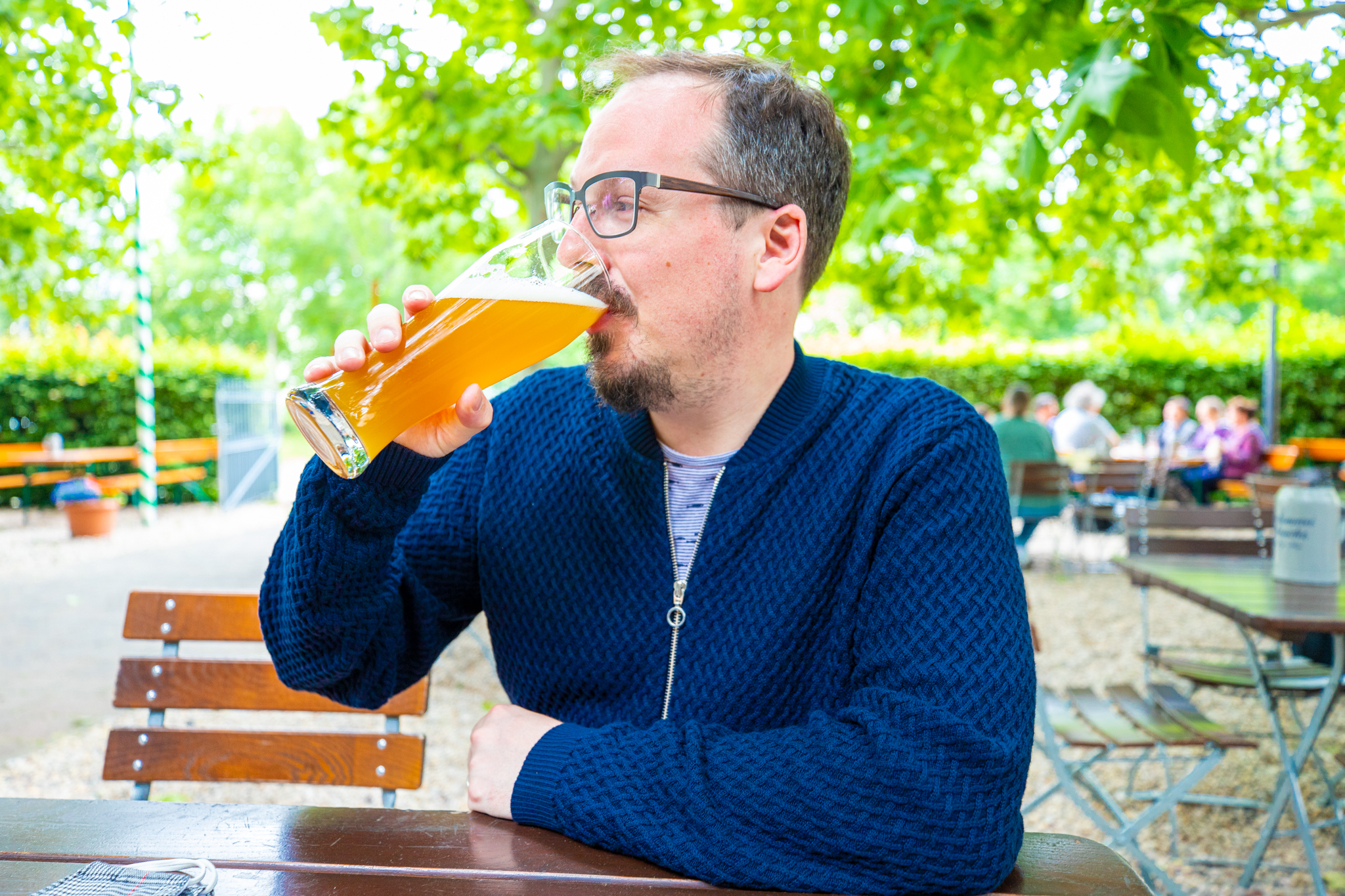 Leipzig is a city with a ton of green space and small lakes all around it. If you happen to visit on a nice day, the parks are absolutely worth exploring via bike. Biking in Germany is very well respected and safe, so you don’t need to be an experienced rider to explore on two wheels. There are clear bike routes marked on the street or sidewalks, as well as special bike lights to alert you when it is safe to cross an intersection.

We simply used the city’s bike share bicycles from DurstExpress Next Bike to get around town, which can be cheaply rented for 1 euro per half hour. You can easily find the bikes using their app which has the bike’s exact location geotagged. Once you’ve picked up your bike, I would recommend biking south through Johanna Park and Clara-Zetkin Park which are filled with wonderful tree-lined paths and grassy open areas. This is such a lovely park! Cross over the Elsterflutbett river on the Sachsenbrücke Leipzig for an especially nice view of the park.

Continue your bike ride along the charming Karl Heine Canal which is lined with apartments, houseboats, and lots of lush greenery. On a sunny day, this is like something out of a Monet painting! If your ride worked up a sweat and you’re in need of a beer, snack or lunch, stop along the canal at Kaiserbad. This was one of my favorite spots in southwestern Leipzig thanks to their spacious patio overlooking the canal.

Leipzig has a growing and thriving art scene, with its beating heart in the Lindenau and Neulindenau neighborhoods. If you simply continue your bike ride from the morning, you will eventually reach this area. If not, it is easily accessed by public transportation thanks to the well connected Leipzig-Plagwitz train station.

Swing by some of the independent galleries inside the Leipziger Baumwollspinnerei, a former cotton factory turned art + cultural center, including Galerie EIGEN which is considered one of the most influential galleries in Germany. Another art hotspot in this area is Kunstkraftwerk, an immersive and new media art museum with some mind-bending exhibits. Make sure to check the opening hours since they are limited.

Also in this area is a TON of colorful street art and murals. Most of the ones that we saw were graffiti style pieces running along the pedestrian and bike paths, especially near the Karl Heine Canal. The area is small enough to do a long walk, but it would also be nice by bicycle. While you’re street art hunting, stop into Chinabrenner. Their delicious Chinese cuisine offers a ton of flavor and at a great price — their lunch deal was a bargain at only 8.99 euros for a full portion, rice, and a drink!

The multi-cultural, graffiti covered neighborhood of Plagwitz in southwestern Leipzig has a similar vibe to neighborhoods in Berlin with slightly less developed infrastructure. It is clear this neighborhood is growing and changing rapidly, and I could totally see this eventually rivaling some of the hipster neighborhoods in Berlin. Along the main thoroughfare Karl Heine you will find a bevy of cute boutiques, hole in the wall cafes, and cool bars. This is the perfect place to spend your second evening in Leipzig!

For boutiques, I was a big fan of the fair trade and ethically produced clothing at Deep Mello. Sam found a few great pieces here! HAFEN, a charming concept store, is filled with locally produced art, plants and pottery at affordable prices. If you like a quirky selection of vintage and upcycled products, WestFach is a great option for finding a unique gift.

Before sitting down for dinner, grab a quick cocktail (and a small plate or two) at one of Leipzig’s best cocktail joints — RUDI bar. You’ll find a menu of inventive combinations as well as classic favorites! For dinner, make a reservation at Chumimi, a quaintly decorated Vietnamese restaurant with delicious favorites like Pho and spring rolls. If you didn’t quite fill up on dinner, grab some late night hot dogs at Beard Brothers. They take classic hot dog flavors from around the world and reinvent them! 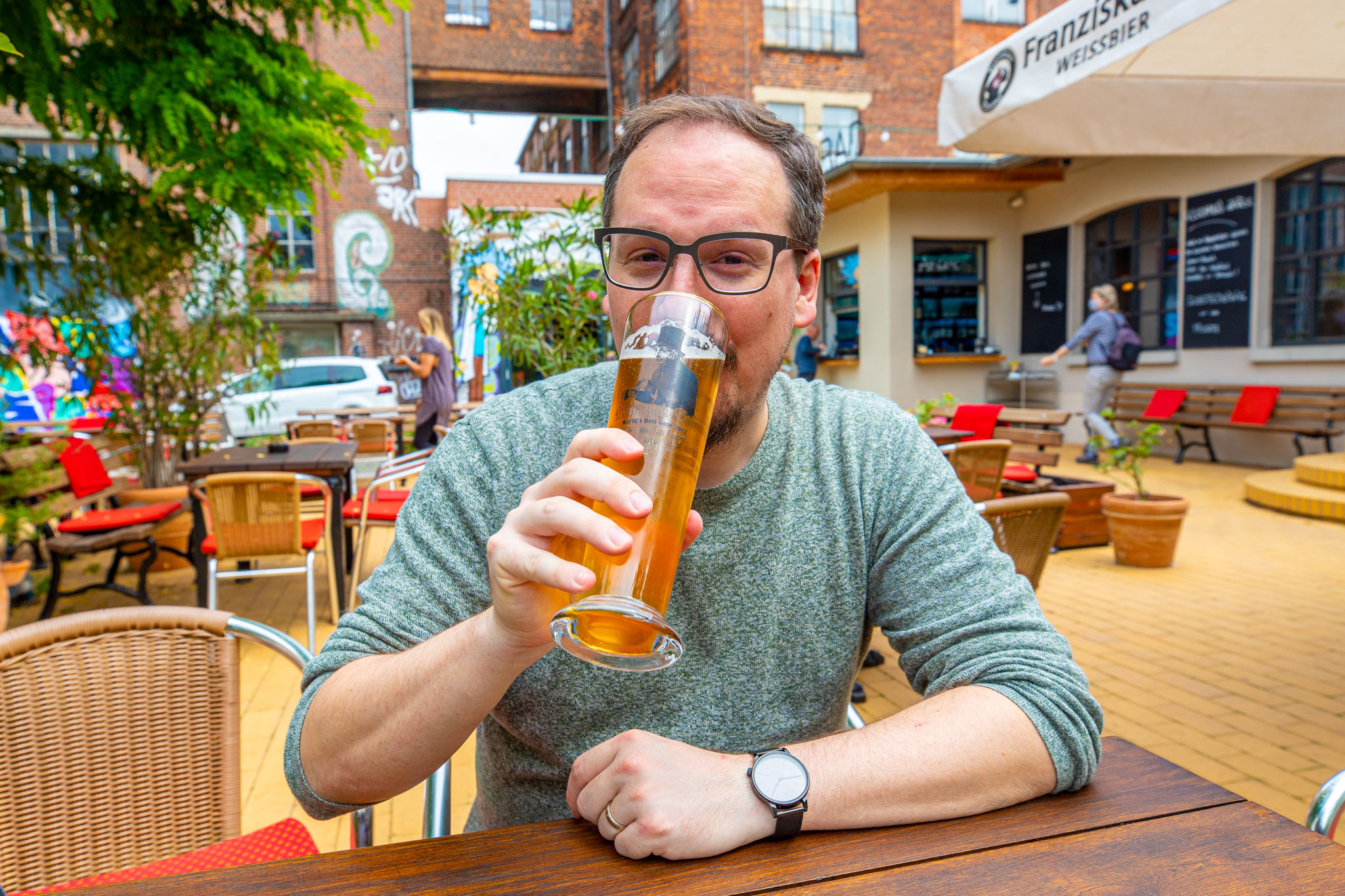 Do you have questions about spending 2 days in Leipzig? Comment below and I can help answer them!