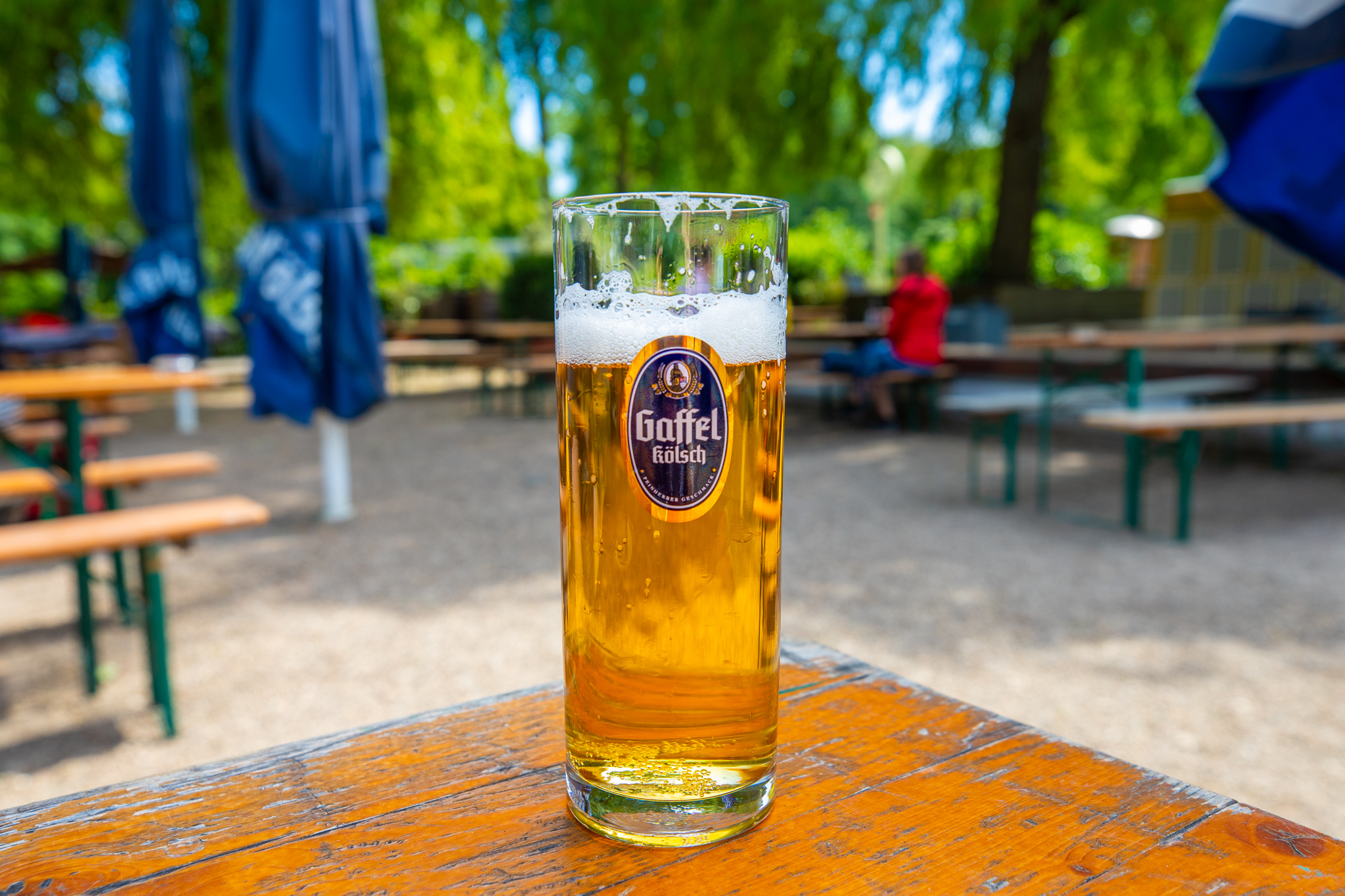 In Germany, it is common for a region or city to specialize in a specific type of beer, whose craft and precise flavors have been mastered over generations of brewers. Whether it is Altbier in Dusseldorf or Hefeweizen in Bavaria, local people are proud of their local beer. Nowhere is this more prevalent than in Cologne.

Since moving to Cologne (Köln in German), my husband and I have become very familiar with the local beer — Kölsch. In and around the Cologne, Kölsch is ubiquitous. Locals will drink almost no other kinds of beer, so if you are visiting Cologne, trying some Kölsch is a must-do activity!

I’m not much of a beer drinker, but my husband has really taken a liking to Kölsch, so he helped me craft this comprehensive guide to Cologne’s Kölsch brauhaus culture.

Everything You Need to Know About Kölsch Beer In Cologne

What is Kölsch exactly?

Kölsch is the beer in Cologne. Walk into any bar or brauhaus in the city and order a beer. You will be getting a Kölsch. Depending on the type of bar you may be able to find different styles of beer besides Kölsch, but they will almost certainly be from a bottle and not on tap. Kölsch is a clear, light, and crisp lager that is warm fermented with top-fermenting yeast, then conditioned at cold temperatures like a lager. It is a quintessential beer-beer.

Kölners are extra proud of Kölsch because it is the only beer in Germany to have a special protected geographical status, similar to Parmigiano Reggiano in Italy or Champagne in France. In order to be properly called a Kölsch, German regulations stipulate that the brewery must be within 30 miles of the city and must brew the beer according to the Kölsch Konvention put forth by the members of the Köln Brewery Association. Like many other beers in Germany, Kölsch must also be brewed according to the Reinheitsgebot, or German purity law. 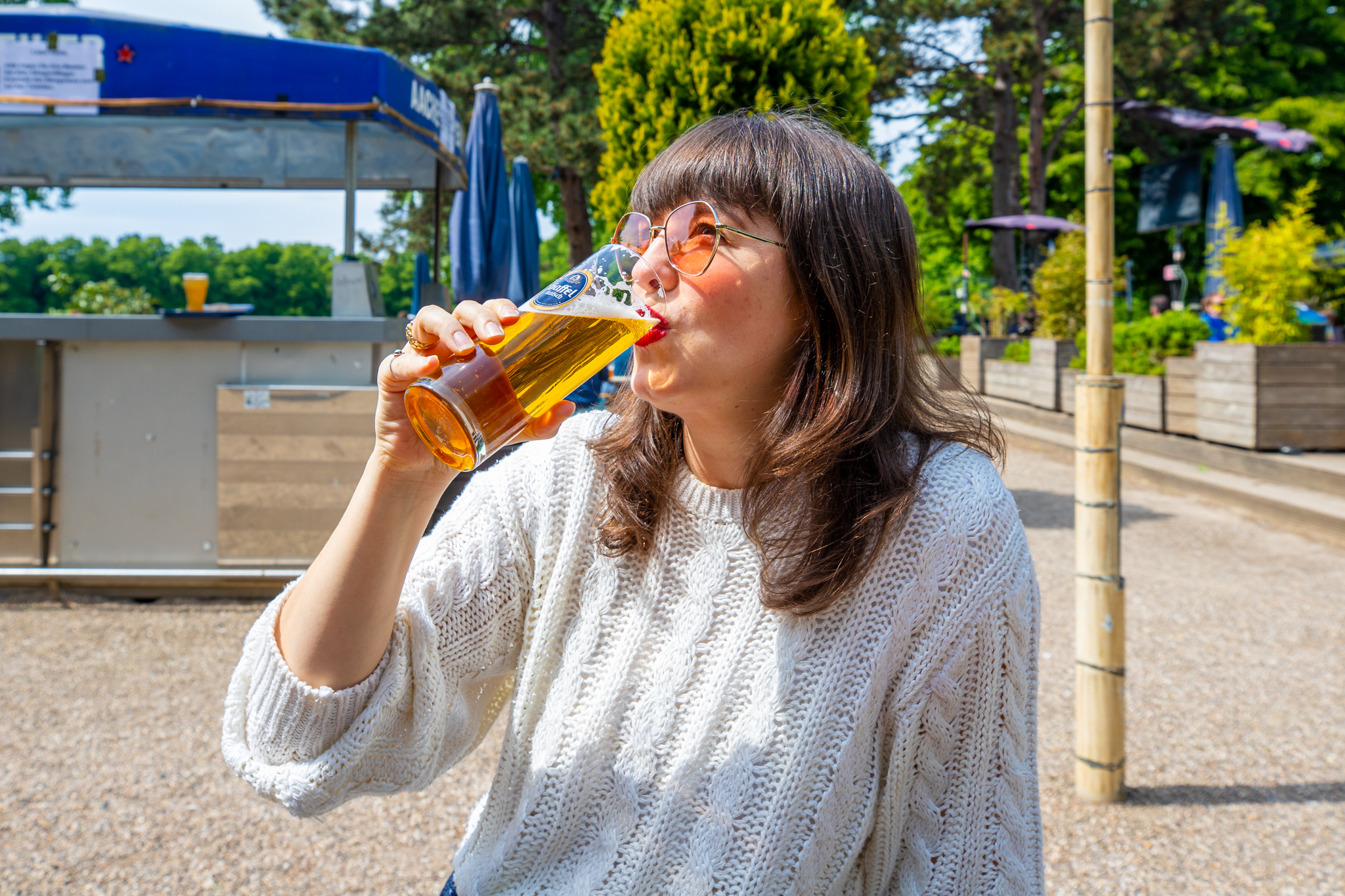 There is a very specific brahaus culture in Cologne, and if you are planning to visit one of the Kölsch beer halls, there are a few things you need to know ahead of time.

Firstly, Kölsch beer is always served in small .2L glasses called a Stange. The glasses are made of thinner glass and the beer is served at a slightly colder than normal temperature. Due to the smaller serving size, the idea is that the beer will remain cold by the time you’re ready for the next one. Because of the thin tapered top of the glass, it is customary to cheers these beers from the bottom of the glass not the top.

Refills will come as soon as you are nearing the bottom of your glass. If you’re in a more traditional brauhaus, the waiters, called Köbes, will come by and replace your empty glass with a full one without waiting for you to order another. To keep track of how many Kölsch you’ve consumed, the Köbes will make a small mark on your coaster. This process will repeat itself until you indicate you don’t want anymore Kölsch by placing the coaster on top of your empty glass. A stack of coasters will almost always be sitting on the table. Constantly swapping out the small empty glasses for full ones can be a lot of work, especially when the brauhaus gets crowded. The Köbes have developed an efficient little system however; they carry around specially designed trays for the glasses called a Kranz. The Kranz usually has slots that hold the Stange and prevent them from tipping or falling over. With this handy tool, the Köbes are able to walk around throughout the brauhaus, swapping empties for full ones and marking coasters as they go. It’s a fun display to watch as you sip on your Kölsch.

Service in a traditional brauhaus tends to be a standoffish, especially to those not accustomed to it. By American standards the service can be straight-up rude, but don’t let it bother you — this is quite normal in Germany and just part of the experience of a Köln brauhaus. The Köbes are very professional but are also responsible for lots of tables so they won’t hang around to chat. Their visits to the table are usually quite short, just enough time to swap out the empty glasses and mark down the new tally. 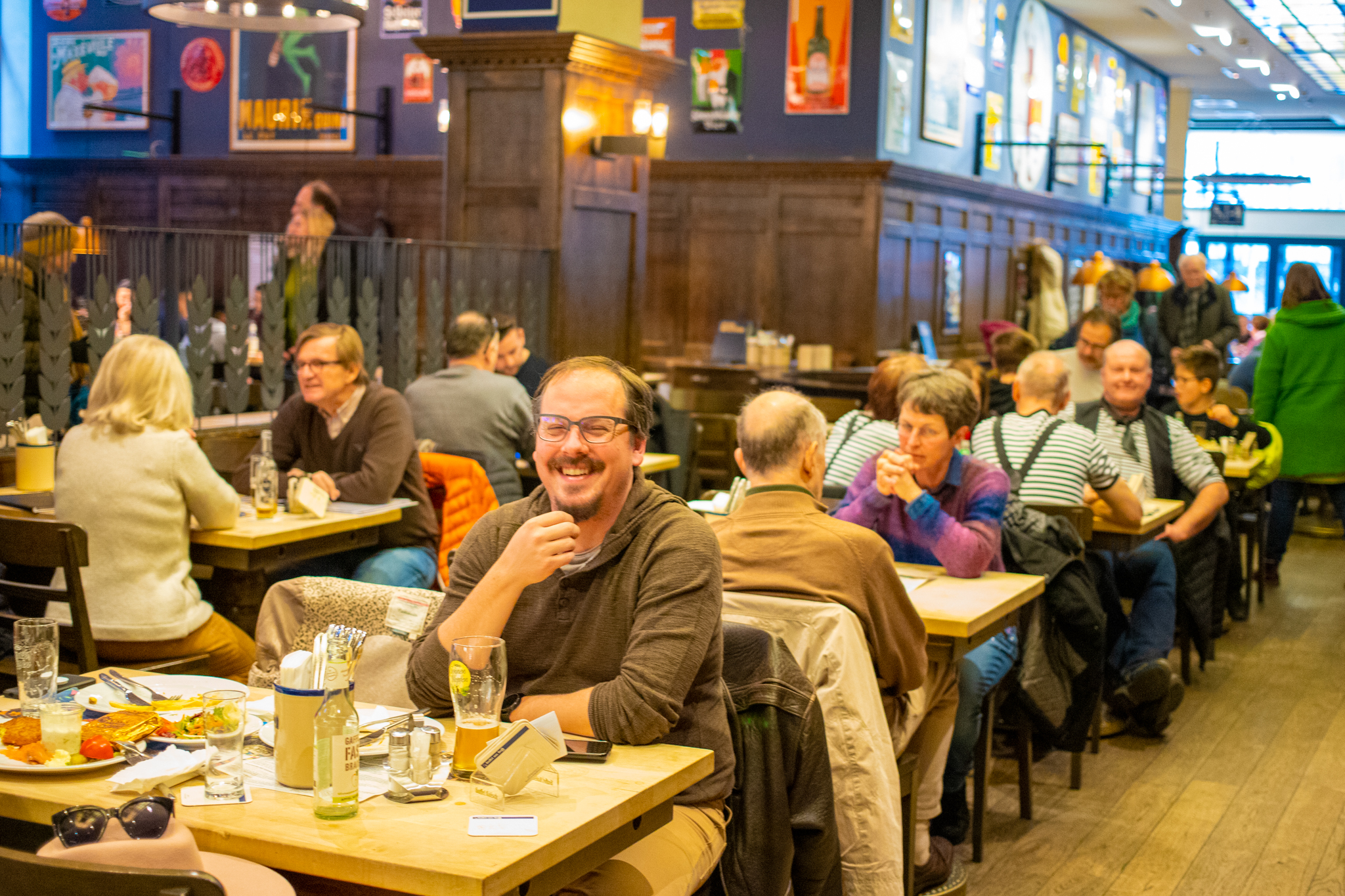 Definitely one of the more popular large breweries, Früh is a great well-rounded Kölsch beer. If you were only going to visit one brauhaus in Cologne, this would be a good choice. Früh’s Kölsh is slightly more malty and has a little more hop flavor going on than other Kölsh varieties which lends to its easy drinkability. The main Früh brauhaus by the Dom is a classic place, sprawling across different buildings and floors with winding hallways and mismatched rooms. Früh is almost always filled with Kölsch drinkers, tourists and locals alike. The food at Früh is pretty good, serving up iconic German and Cologne cuisine.

Gaffel Kölsch is a very clean and crisp beer, more lager-y than other breweries. The beer drinks lightly due to its nice hoppiness, along with a slightly musty-yeasty note on the finish. The brauhaus, located right by the main Cologne train station is definitely worth checking out. Unlike Früh, Gaffel’s brauhaus is one main (and huge) open room with a more modern feel to it. The food at Gaffel’s brauhaus is the best of all the Kölsch bars on this list, so it is a perfect place to go before catching a train at the hauptbahnhof. 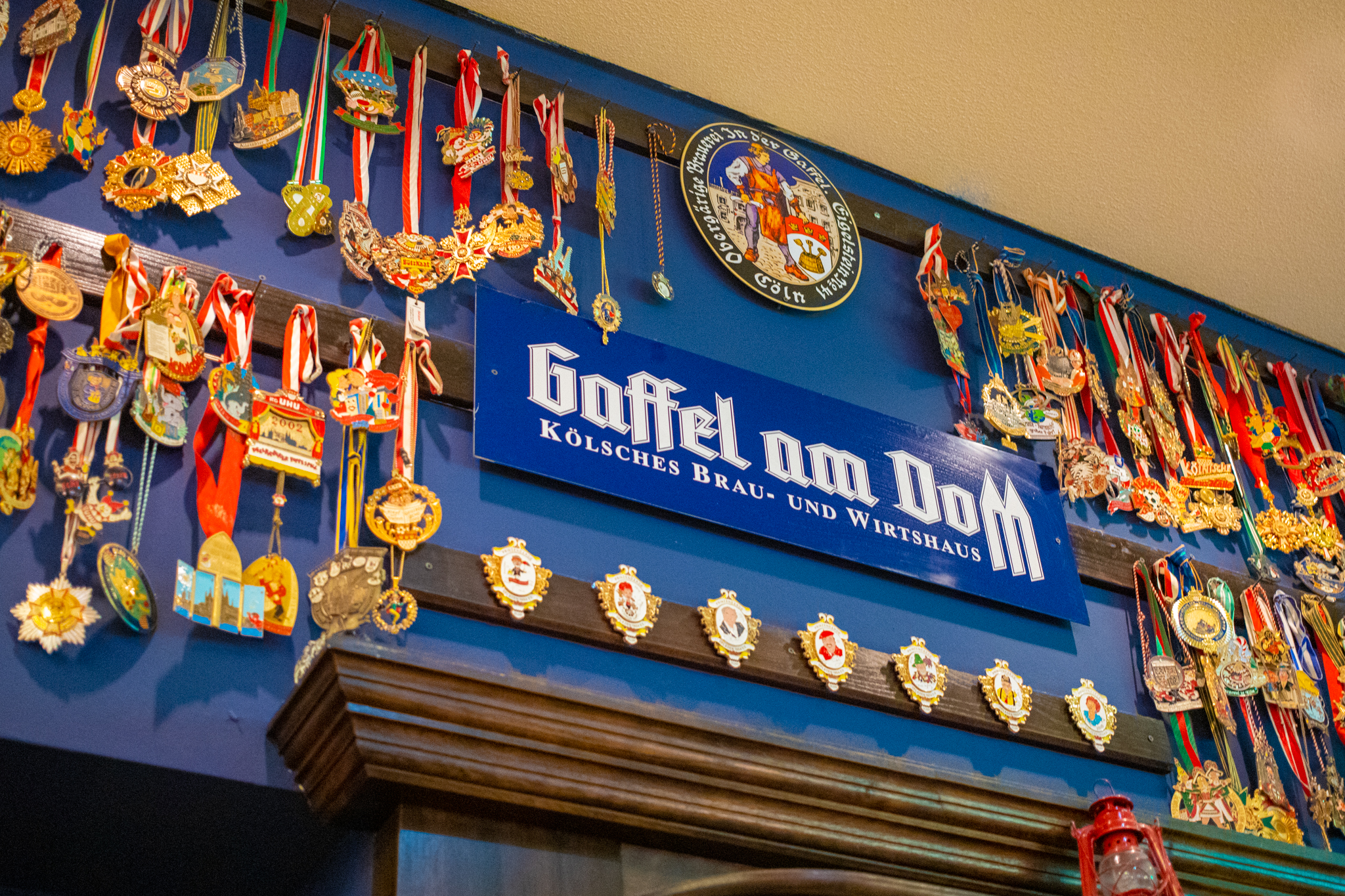 Reisdorf is another brewery of Kölsh beer that is probably the most well known outside of Cologne. It also happens to Sam’s favorite of the larger breweries. The Kölsch has a slightly maltier and heavier taste with a great hoppy finish. The malts have a little more toasted flavor, lending to a beer with a bit more body and a broader malt flavor. Reisdorf, along with the other macro brands, is easily found throughout town, both in bars and stores. Unlike Gaffel and Fruh however, Reisdorf does not have a dedicated brauhaus in the Cologne’s Old Town so you’ll need to pop into a bar to sample it.

Brewed at the Brauerei zur Malzmühle just outside of the old town near Heumarkt, this small brewery has a cult-like following. Some people will only drink Mühlen! While still a Kölsch, the beer has a richer, hoppier flavor and a great malt backbone. A little harder to find around town, but definitely well worth a stop when you do. Their iconic windmill logo is easy to recognize.

Peter’s Brauhaus is a great little brewery right in the Old Town. This is Megan’s favorite Kölsch brauhaus. It is a quintessential German place frequented by locals and tourists alike. The Kölsch is smooth and crisp and always fresh from the tap. It is more challenging to find Peter’s in a store or outside the brauhaus, so this is a great place to bring people visiting from out of town because it is quite unique to Cologne’s old town area.

Do you have questions about visiting a Kölsch brauhaus in Cologne? Comment below and I can help answer!