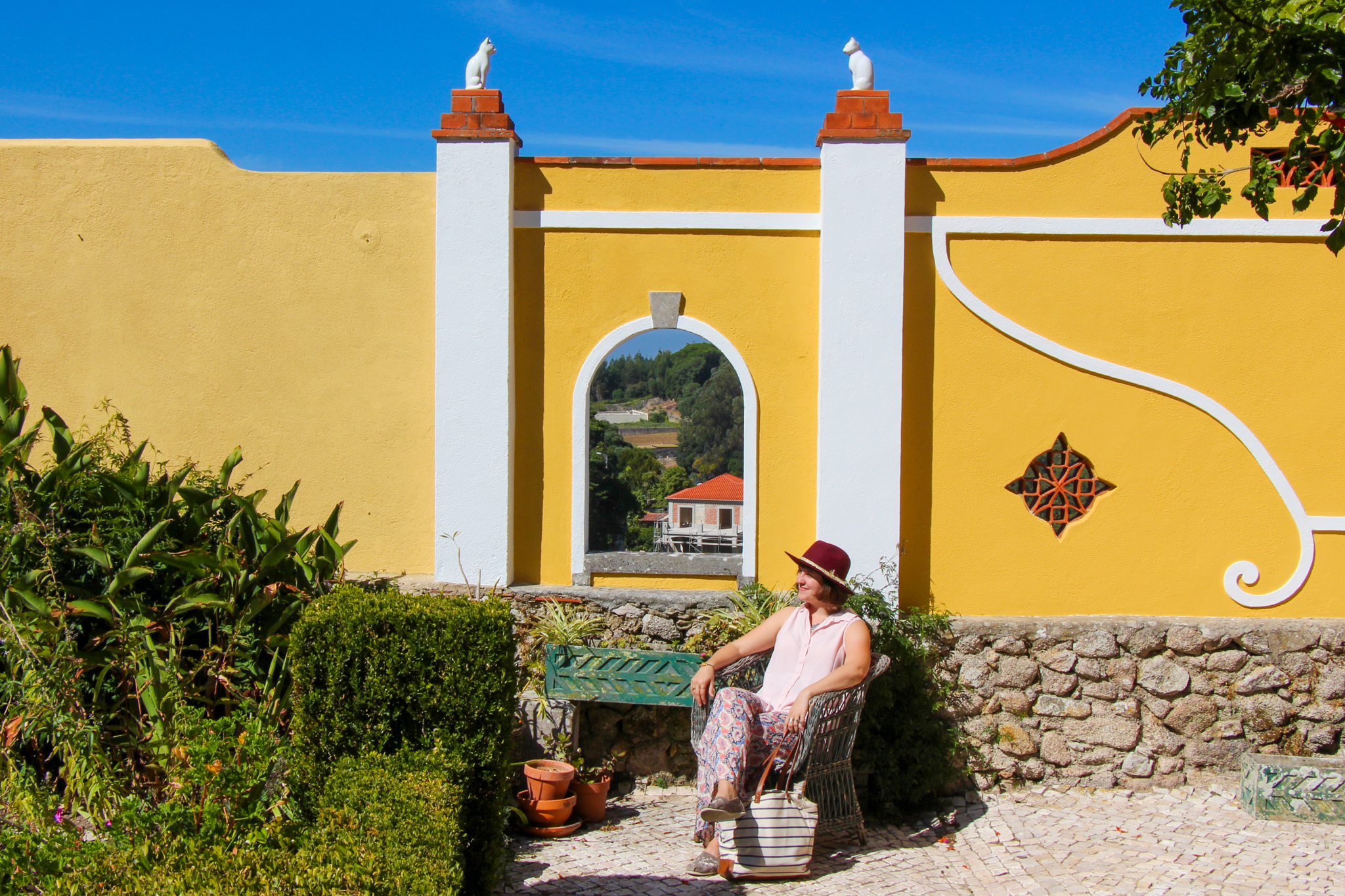 Admittedly, Sintra was one of the cities I was most looking forward to on my visit to Portugal. I had seen SO many photos of this magical land on Instagram, and I was really excited to shoot some photos there while on my 2 week honeymoon in Portugal. I heard from so many people about how beautiful it was and I am happy to report — it exceeded all of my expectations!

Once home to the palaces & summer homes of Portugal’s rich and royal, Sintra feels like something straight out of a fairytale. Its small cobblestone streets carry old world charm with a quirky 18th century opulence of colorful manors that dot the skyline, all housed in the incredible natural beauty of a wooded mountainside town overlooking the Atlantic Ocean. It is truly the perfect balance.

Sintra is only about 40 minutes west of Lisbon and is quite easy to get to via public transportation. Trains run from Lisbon to Sintra every 30 minutes throughout the day and it only costs about $4. There are plenty of Lisbon-based agencies that offer day trips, but it’s fairly straightforward to go on your own, so I don’t think there is a really a need to pay extra money. You can buy a multi-day Sintra visitors pass to see all the museums I mention below for a discounted price.

We opted to spend two nights in Sintra, which I personally would recommend — there is certainly enough to see and do in 36 hours. Sintra has exploded in popularity since I visited in 2016, so there will certainly be hoards of tourists during the day. The town really quiets down at night and feels much more quaint and cozy,. Plus, by staying in the town, you can get to the palaces and castles as soon as they open for nice, clean photos. With that said, you could potentially hit all the major sites in one day if you really hustled.

These are the 5 most Instagrammable spots to visit in Sintra, Portugal! 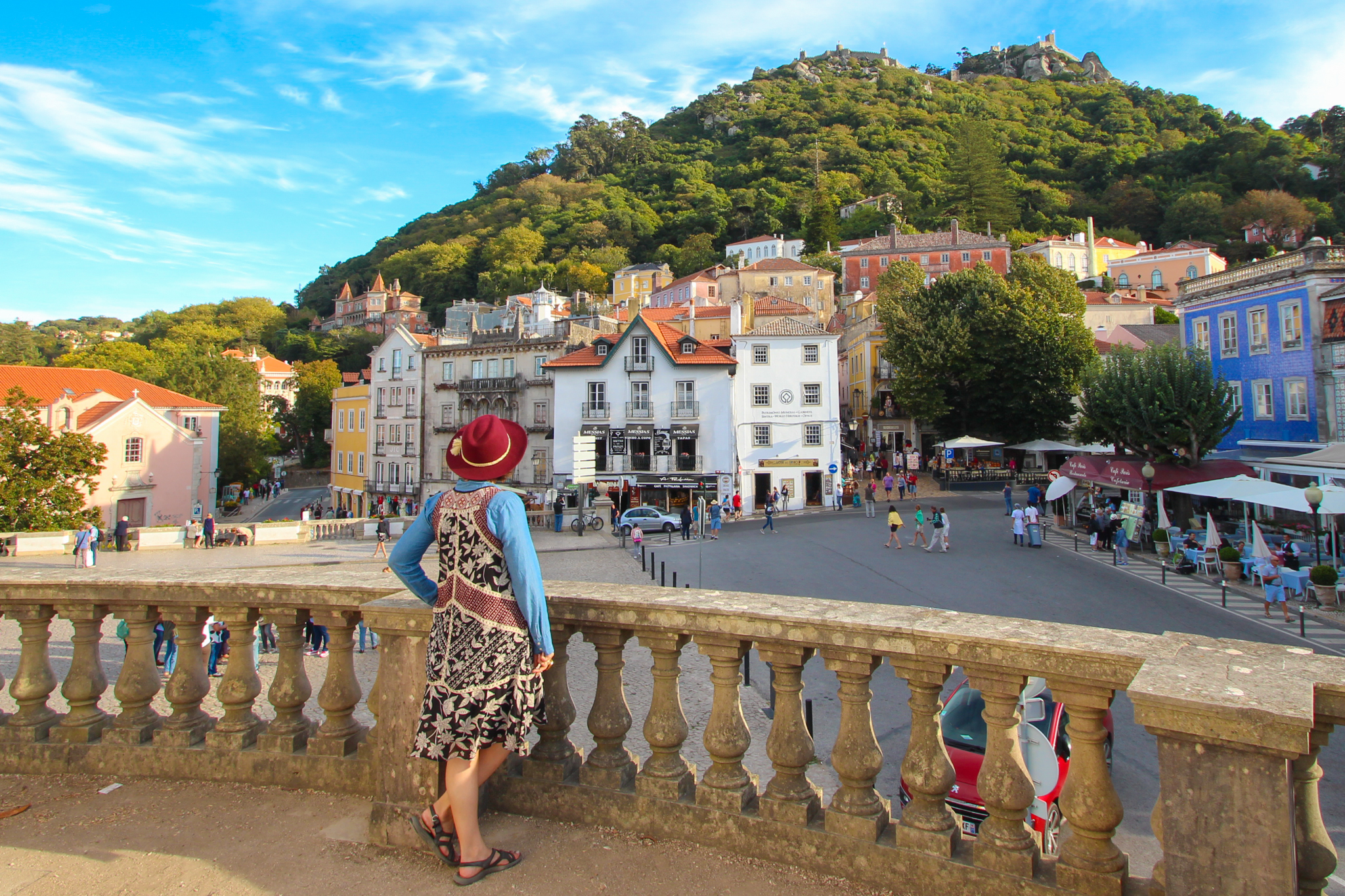 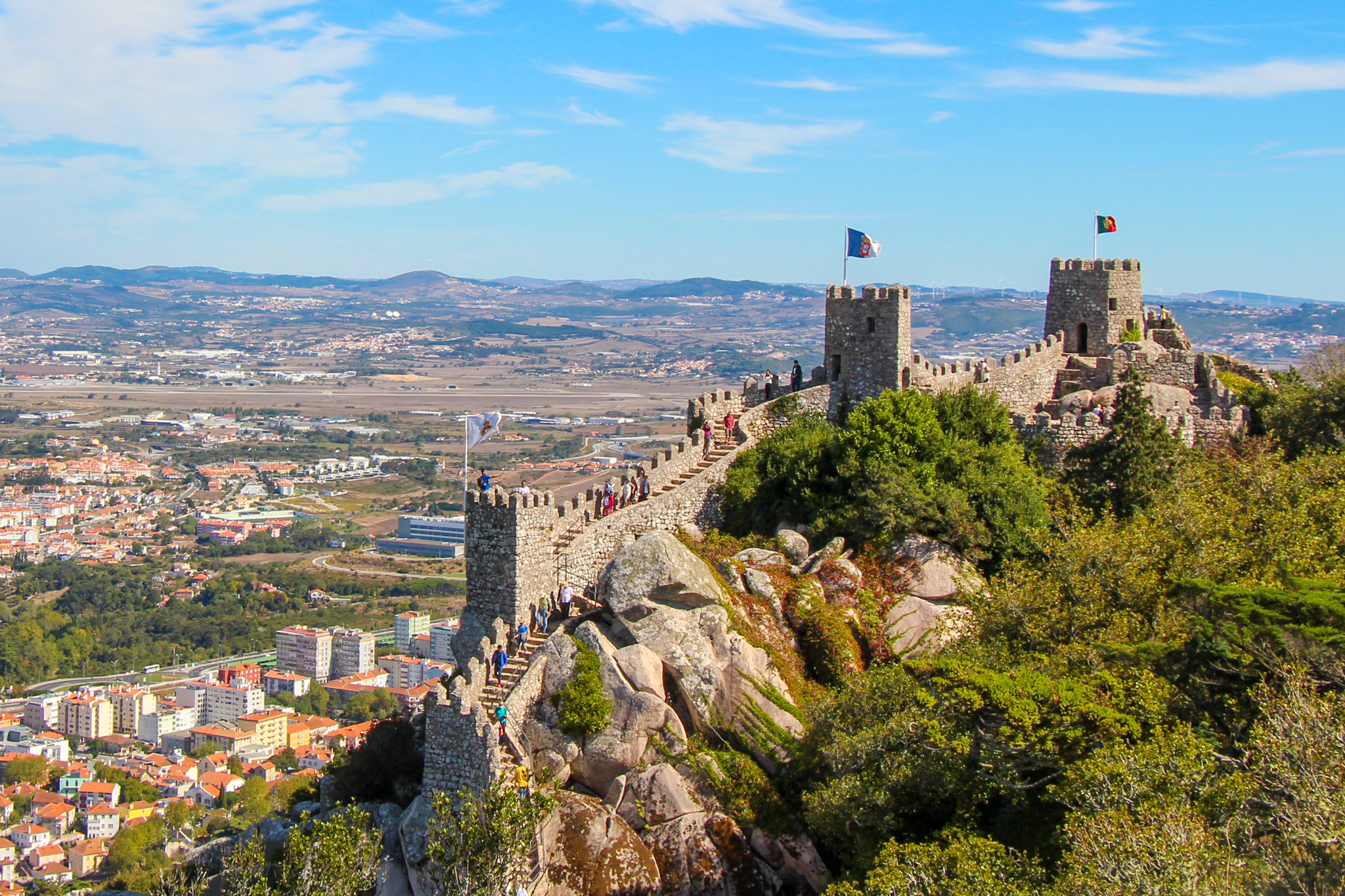 The oldest of the sites in Sintra, the Moorish Castle also sits on top of a mountain and previously served as a fortress and military site for the Moorish and Portuguese empires. It has been restored throughout the years, and is currently in good condition. You can walk across the original fortress walls and climb up into the old watch towers, as well as wander the ruins of the town that was previously inside the caste walls.

The ruins themselves are cool to see, but the real draw of this site is the views. With sweeping 360 views of the town, ocean and even Lisbon, this is by far the best vantage point in the region. I also found this site unique because of the natural landscape within it. The fortress was clearly built around the existing nature and the original builders did not attempt to alter the landscape. You’ll notice massive boulders and trees inside the castle that have clearly been there for hundreds of years.

Pro tip: You can see the Pena Palace to the southwest when you are at the Moorish Castle, making for a great photo opportunity. If you want to snap a good picture of the palace, I would recommend going a later in the day when the sun is better positioned. 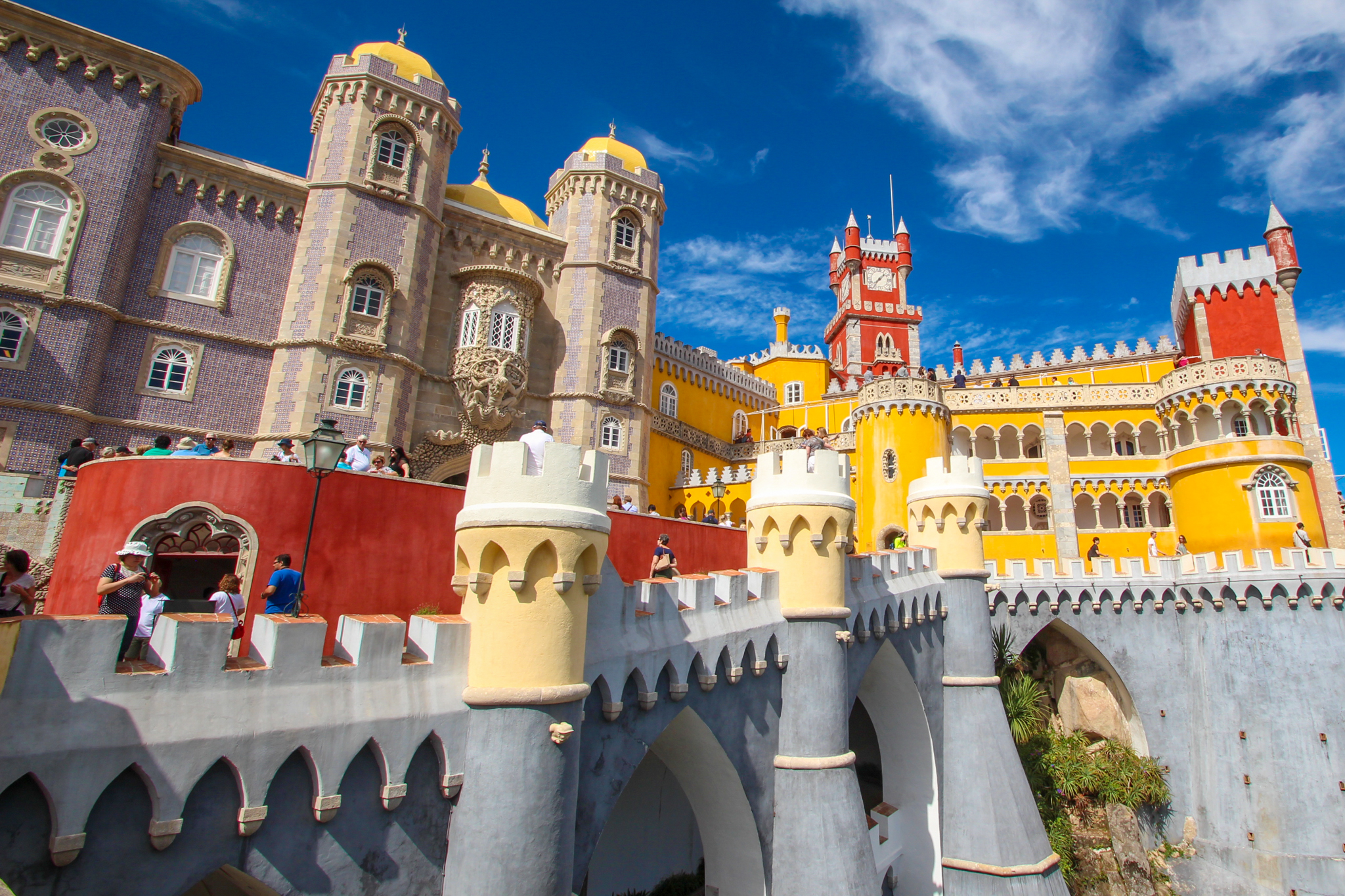 Perched on the top of a densely wooded mountain, Palacio National de Pena is a quirky blend of grandeur, charm and international inspiration. It’s colorful yellow and red exterior is the first thing you’ll notice as you walk up to the castle from the entrance gate. Next, you’ll certainly spot all of the hand-painted telework and the hand raved facades, which are in a variety of styles from Rococo to neo-classical.

The whole palace is such a unique mish-mash of different styles, colors and time periods making it an adventure to explore. You can go on a self-guided walking tour through the palace, and the rooms are well marked so hiring a guide is not entirely necessary. The inside of the palace has a variety of different rooms to see, my favorite of which was the grand hall. As the palace has ongoing restoration work by historians, more and more of this castle will open to the public over the next few years.

Pro Tip: If you spend the night in Sintra, this is the site I would recommend going to first. It is the most popular attraction in town and fills up with tourists quickly during the day. It opens at 10am, so it’s easy to get there early enough to beat the major crowds. 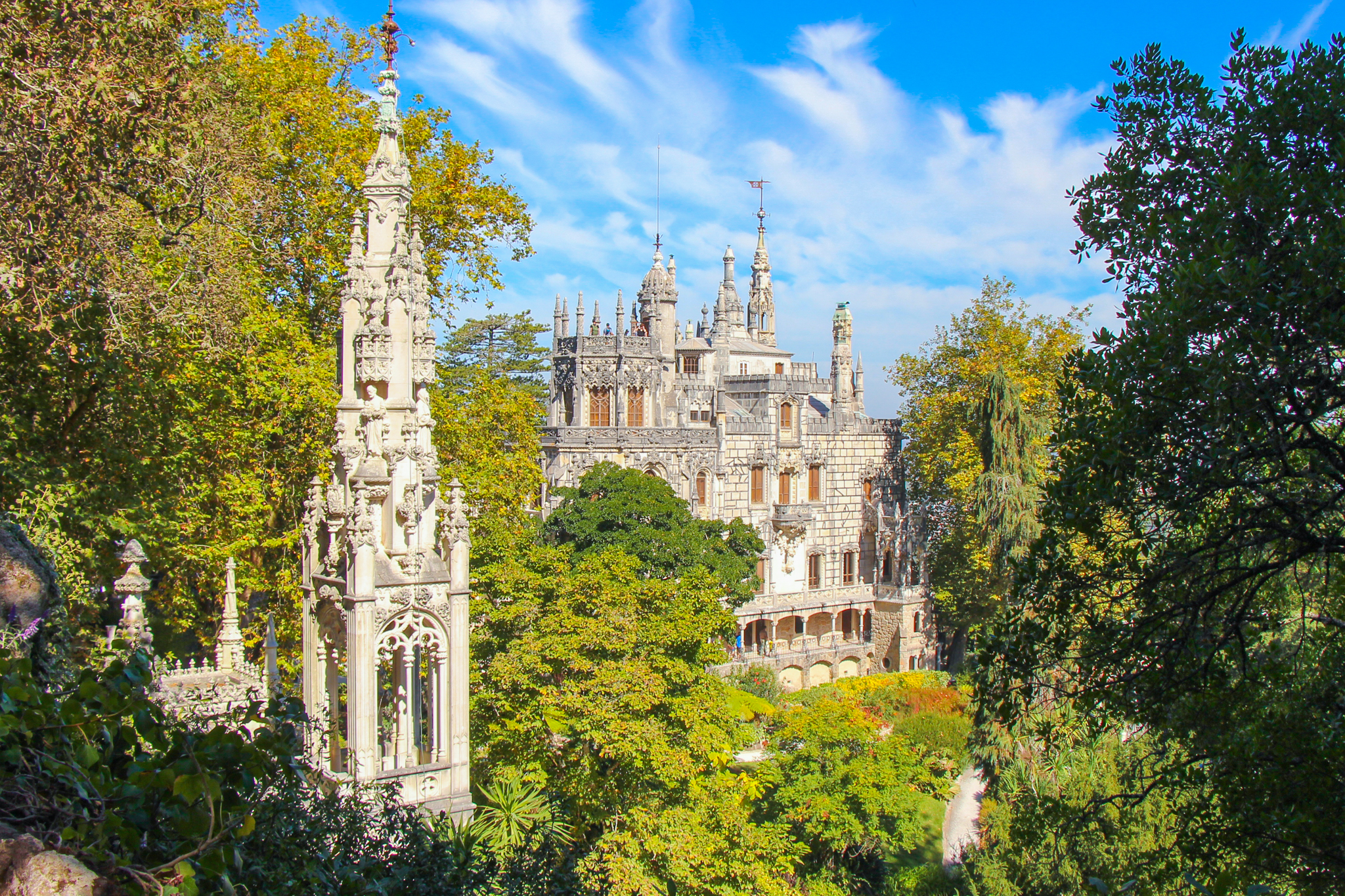 Just a little further down the road from Sintra Town (but still a short walk — about 15 minutes) is Quinta Regelaria. Well worth a visit, the garden grounds of this neo-Gothic mansion are an incredibly creative display of where landscape architecture meets whimsical wealth. Built in the 19th century by a wealthy English businessman with an affinity for flair, you’ll stumble upon hidden waterfalls, tiny hideouts and secret paths.

My favorite part of the whole grounds through were the secret underground tunnels running throughout the garden. You can enter them from multiple spots, and all lead to the central turret that plunges 40 feet into the earth. Some are lit, some are not so it makes from a fun adventure in the dark.

Since the grounds are vast with so many spots to explore, Quinta Regelaria may seem like it is going to be crowded when you arrive (since there is bound to be a line) but it does not feel that way when you’re actually inside. You’ll find your own unique and quiet spot to enjoy.

Pro Tip: In the main house, only bother seeing on the main floor. It has beautiful hand-carved wood ceilings and a few interesting frescos. The upper floors consist of poorly marked, poorly lit and totally uninteresting rooms they call a “museum” — it just isn’t worth your time. The real draw to this mansion is the gardens. 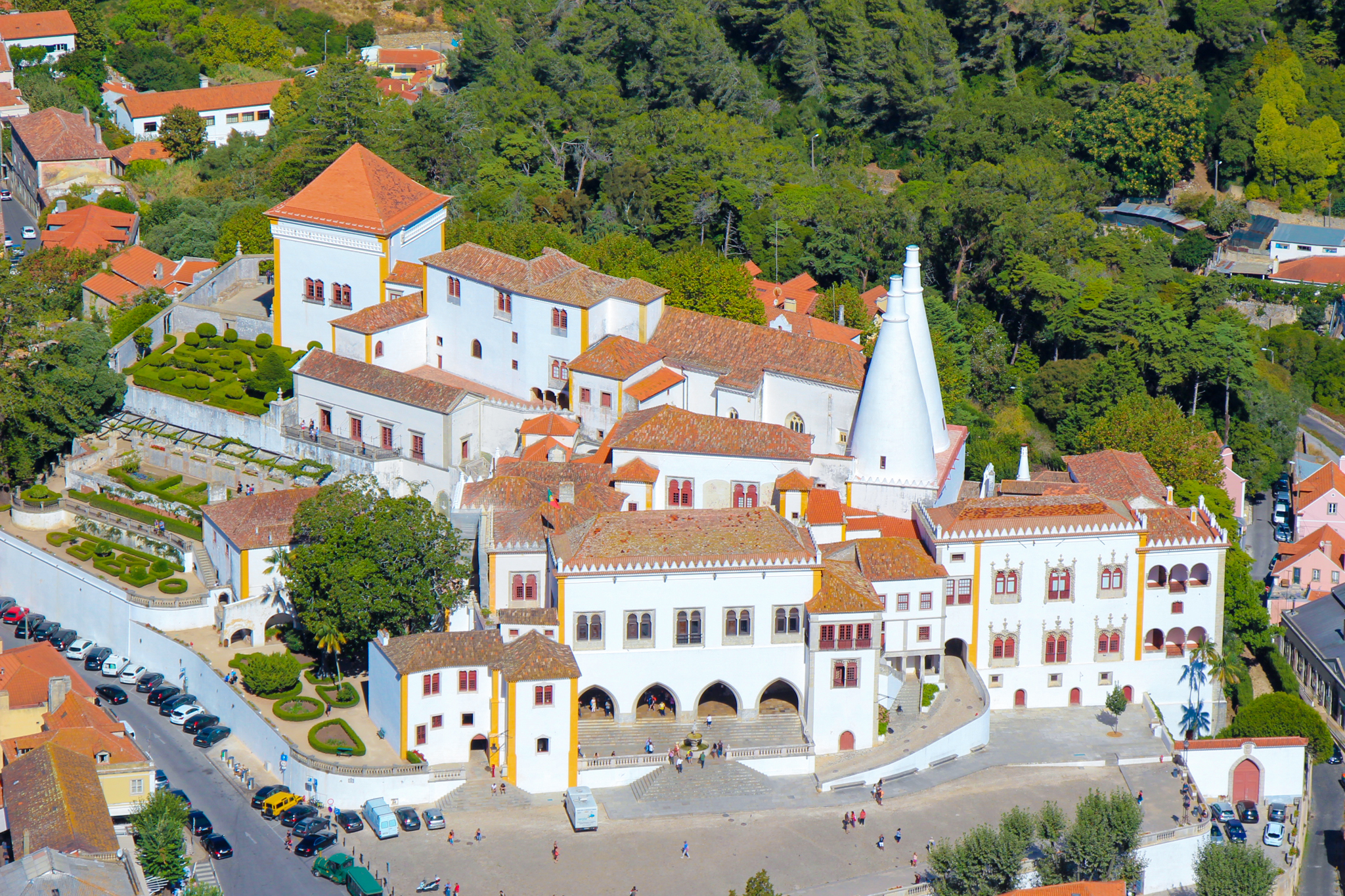 Literally in the center of Sintra town, the Royal Palace is easy to spot with it’s iconic twin funnel towers. Dating back over 1000 years, the palace served as the royal residence for the Portuguese crown for hundreds of years. It is an interesting hodge-podge of architectural eras, including Manueline, Moorish and Medieval and as you walk through, you’ll easily notice the progressive and expansive nature in which it was built.

The highlights of a walk through include the Swan room (literally a ceiling covered in a swan mural), the unique kitchen, and the prison room of King Afonso VII. My favorite room however was Blazons Hall. The lower walls are covered in massive Azuelos, Portugal’s iconic blue painted tiles, while the ceiling is made of elaborately carved wood and murals of the various royal houses of Portugal.

Pro Tip: If you’re strapped for time or too tired from the day of museum visits, this is the one to skip. But it’s also easily seen in under an hour and it’s worth squeezing in! 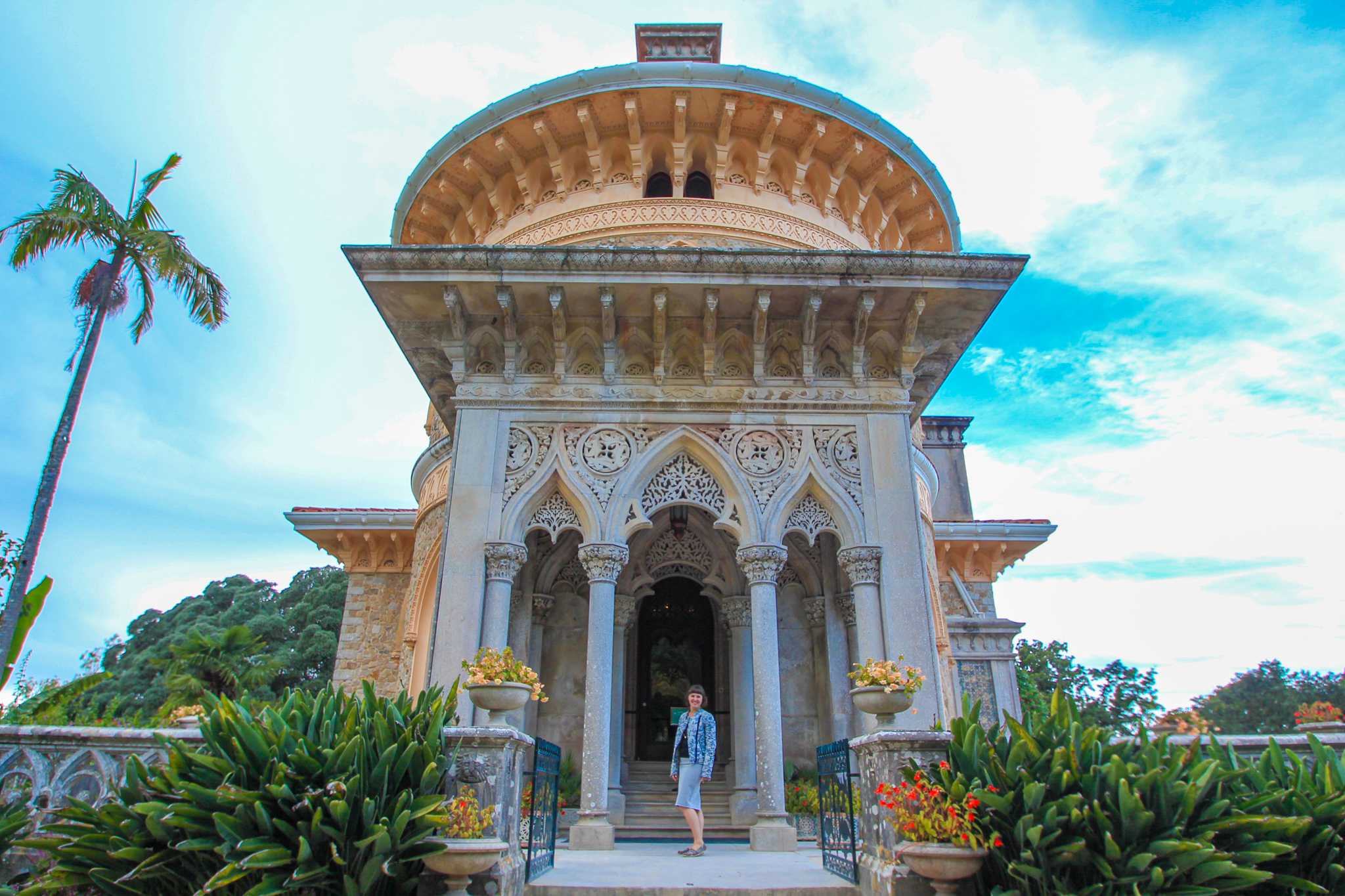 Located about 15 minutes drive outside of the town, Monserrate Palace was once the summer estate of Sir Francis Cook, a 19th century British merchant. After his extensive construction & restoration of the estate, the palace fell into disrepair after his death. Throughout the 1900s, it largely abandoned. There is a lot of active & ongoing restoration work so this estate is very much a work in progress — it was only acquired by the Portuguese government in the 1990s — but if you go in with an open mind, you’ll be rewarded!

The main floor of the palace has nearly completed its restoration, and is in great condition. The central hallway and central fountain are by far the highlight! The hallway is lined with incredibly detailed Arabic-inspired frescos creating a near perfect mirrored image on each side of the building. There is also a library, parlor room and music hall on the main floor. The upstairs is pretty barren at the moment.

Sir Francis Cook was apparently quite the botanist, because the palace is only a small part of the massive estate, most of which is consumed by botanic gardens. He collected plants from around the world and brought them here, creating mini biospheres within his property. Wandering around the beautiful grounds, you’ll walk through a fern valley, Japanese gardens, pine forests and ornamental lakes. On a sunny day, this is a serene escape!

Pro Tip: I would only recommend coming out here if you spend the night in Sintra. We visited the palace on our last day in town, and definitely appreciated the stop, but wouldn’t necessarily try to squeeze it in above other places. With its gardens and walking paths, it would be a peaceful way to start your day with a coffee in hand!

This post was originally published in November 2016, and then updated in January 2020.

Do you have any questions about visiting Sintra? Comment below and I can help you out! 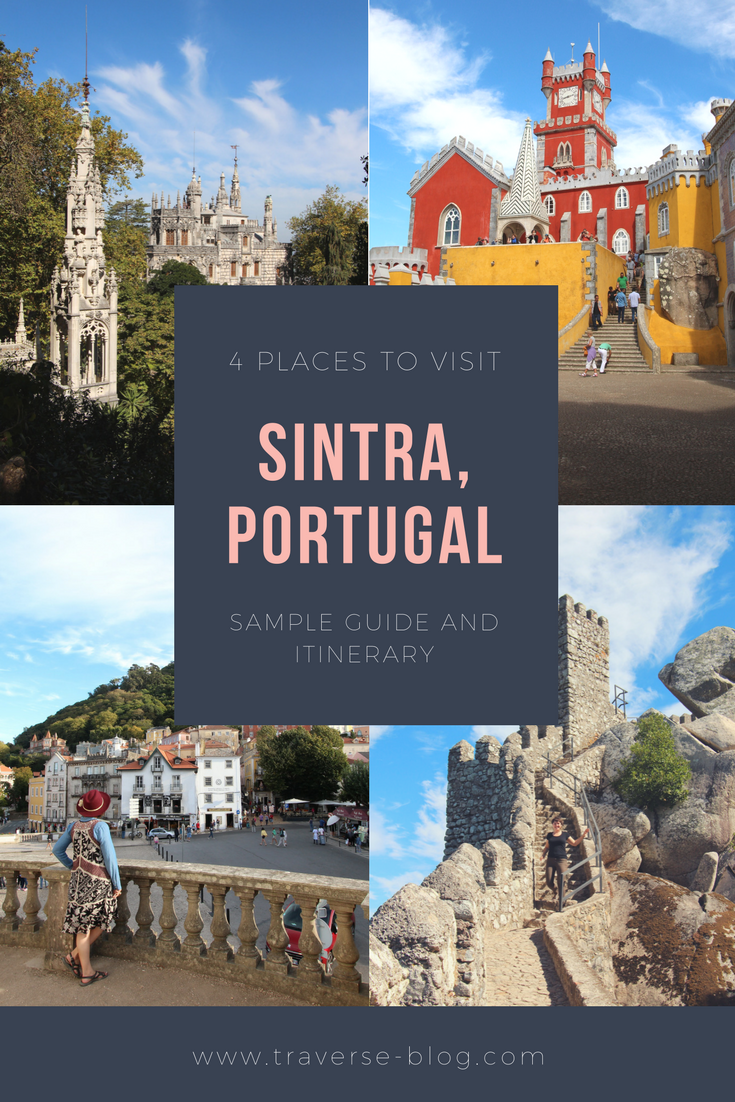