How to Spend 1 Perfect Day in Ghent, Belgium 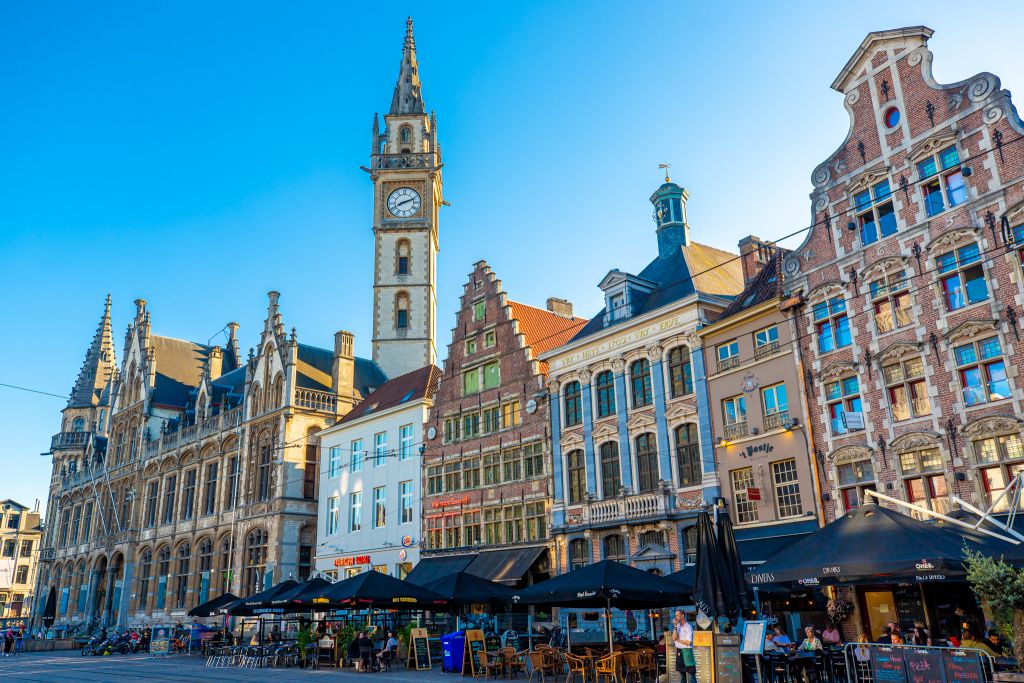 Planning a trip to Belgium typically includes stops in Brussels and Brugge; but one of the highlights from our week-long vacation in Belgium was actually Ghent. I am convinced Ghent is the most underrated city in Belgium. Which is saying a lot, because I think Belgium is one of the most underrated countries in Europe. Go ahead and fight me on it in the comments, but this small nation is a powerhouse when it comes to food and travel experiences. In this post, I hope I can convince you that Ghent is worth a visit with this 24 hour travel guide to Ghent!

I was convinced to go to Ghent by a friend (who is dating a Belgian) because she said it was even more beautiful than Brugge. Ghent was the largest city in Europe behind Paris during the Medieval period. These days it is often neglected in favor of more famous places, but Ghent is a perfect combination of storybook streets, romantic canals, bohemian flair and cosmopolitan amenities.

After visiting Ghent a couple of times, I would recommend at least 24 hours to really soak in all the history, culture, and relaxed vibes of this gothic city. On my latest trip, I spent three nights in Ghent, using it as a jumping off point for exploring other nearby attractions like Dinant and Bruges.

The Complete 24 Hour Guide to the Best of Ghent 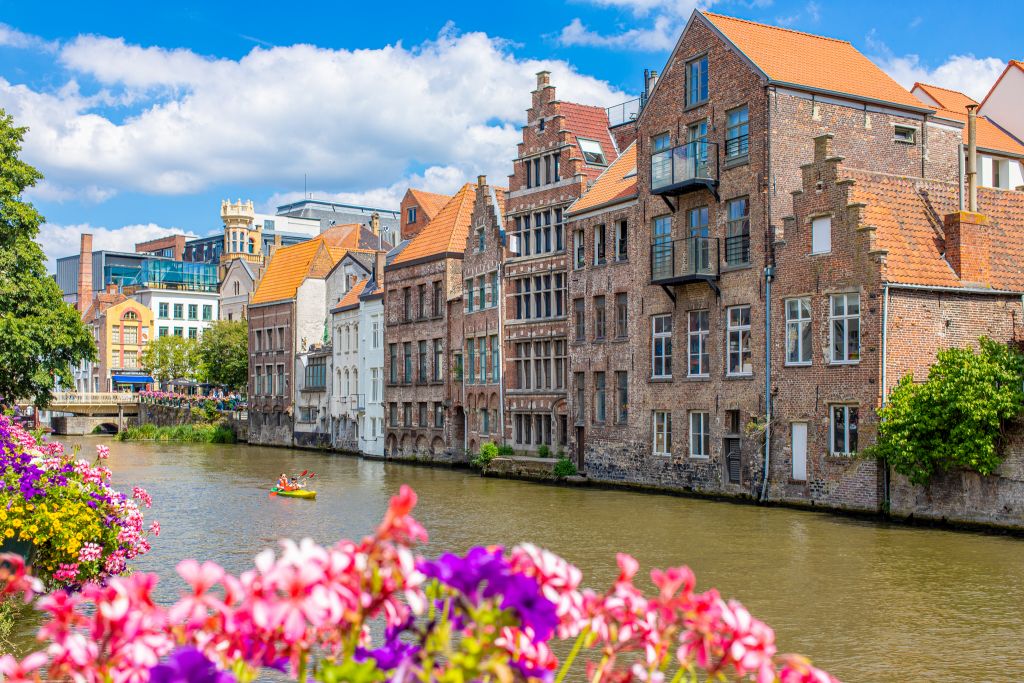 Start your day in Ghent with a simple walk around the old town area. I think Ghent is the perfect place to wander on cobblestone streets and along flower lined canals, because its footprint is small. You can cover most of the highlights in just a few hours. There are certainly museums, cathedrals and cultural sights to explore in Ghent, but you could just as easily admire the city from the street. It is incredibly picturesque!

A few of the important highlights to appreciate in the old town are the three medieval towers of Ghent. Clustered together in the center of town, you’ll want to have a look at Saint Bavo’s Cathedral, Saint Nicholas’ Church and the Belfry Tower. The best viewpoint to see all three towers at once is from the Sint-Michielsbrug arched stone bridge. It is especially nice around sunset when the lively student population clusters around the river.

Inside Saint Bavo’s you will find the masterfully painted Ghent Altarpiece by Jan van Eyck. He is Belgium’s most famous classic painter, well known for his hyper realistic early Renaissance paintings of people. Millions of people have visited this painting, and it is inextricably linked to Ghent’s history. The Ghent Altarpiece was actually Hitler’s top choice for the centerpiece of his Führer Art Museum. He wanted it because of its fame and importance, but also because it had been forcibly repatriated to Belgium from Germany by the Treaty of Versailles.

Another historical spot to check out on your 24 hour visit to Ghent is the imposing Gravensteen Castle, also called Castle of the Counts. Dating back to the 12th century, the large fortress sits on the corner of a canal with a medieval grandeur that is unmissable. It is the only medieval fortress in Flanders that remains intact today. We opted to take in the castle from the perimeter for free, but there is also an option to do a guided tour through the inside for a small fee. 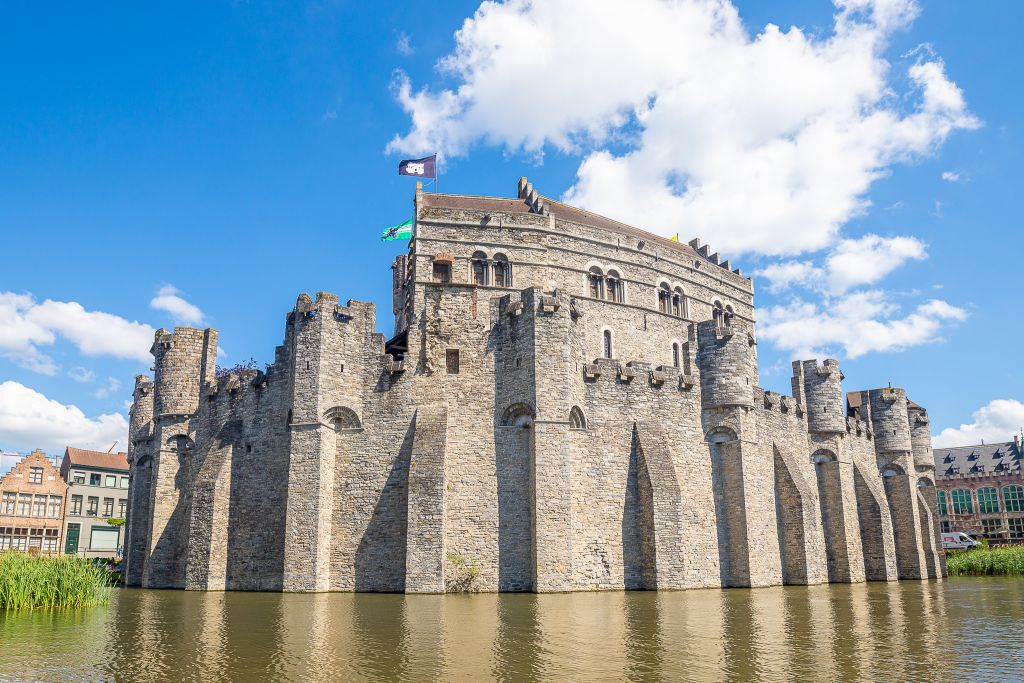 To see Ghent from another perspective, consider taking a canal cruise! This is a very popular activity to do on a 24 hour visit to Ghent. There are a few cruise providers in town, but they all follow roughly the same path. The boat tours last for 1 hour, cruising along the historic canals and giving you history about the city in three different languages. The main pick up point is near Gravensteen Castle and you can check the times and options at the nearby tourist center. There are also kayak rentals for exploring the canals, if you want a more active way to appreciate Ghent’s waterways.

Plan a Longer Stay in Belgiumwith my 1 week itinerary

After your historic cruise, check out one of the most modern parts of Ghent – the street art! Tucked in a hidden alleyway near the Ghent City Hall, you will find Graffiti Alley. Every inch of this small street is covered in an ever changing patchwork of creative graffiti and street art murals. You’ll see political motifs, abstract murals, and street style logos of local artists. We even saw one being painted during our visit! 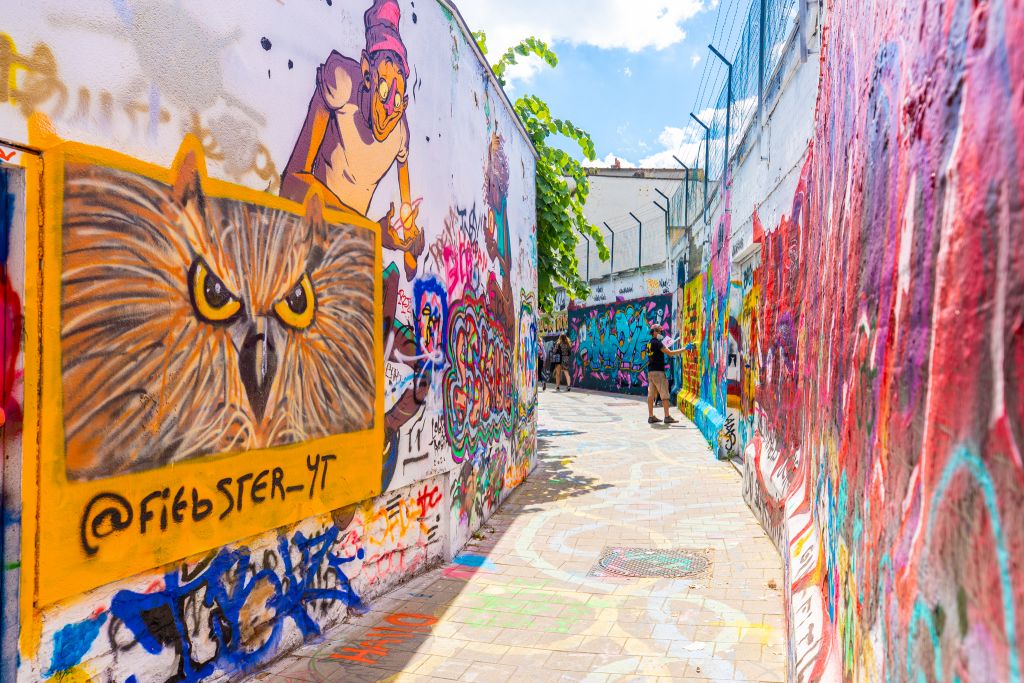 To see Ghent from another perspective, consider taking a canal cruise! This is a very popular activity to do on a 24 hour visit to Ghent. There are a few cruise providers in town, but they all follow roughly the same path. The boat tours last for 1 hour, cruising along the historic canals and giving you history about the city in three different languages. The main pick up point is near Gravensteen Castle and you can check the times and options at the nearby tourist center. There are also kayak rentals for exploring the canals, if you want a more active way to appreciate Ghent’s waterways.

After your historic cruise, check out one of the most modern parts of Ghent – the street art! Tucked in a hidden alleyway near the Ghent City Hall, you will find Graffiti Alley. Every inch of this small street is covered in an ever changing patchwork of creative graffiti and street art murals. You’ll see political motifs, abstract murals, and street style logos of local artists. We even saw one being painted during our visit!

For dinner, check out the historic Patershol neighborhood. Full of beautiful old houses and tiny, winding streets, this area is dense with restaurants and a buzzing energy at night. Oudburg street has a kilometer long stretch that is lined almost exclusively with restaurants, so there are more than enough to choose from. For specific suggestions of where to enjoy dinner in Ghent, check out my Ghent restaurant guide. It includes all my favorite spots, as well as suggestions for breakfast and lunch too.

I would strongly recommend keeping an eye on what time sunset in Ghent is, because there is something truly stunning about this city at golden hour. The medieval brick facades and sunlight reflections off the canals illuminate the city’s skyline in this magical way. I am not the only one who knows this either – you’ll see locals pack the banks of the river and canals around sunset. It is especially crowded between the Grasbrug and Saint Michael’s bridge. It is fun though! There is such a buzzy energy in Ghent at this time of day.

It should come as no surprise that Belgium is a wonderful destination for those who like to imbibe. Belgian beer is famous worldwide, and even if you don’t know your lambics from your trippels, Het Waterhuis aan de Bierkant will welcome you to sample a variety of beers at their homey tavern with riverside views. Bierkant and the Dulle Griet on the Vrijdagsmarkt are also good options, they’re just a little farther away from the city center.

If you’re in the mood for cocktails instead, I can’t recommend The Cobbler enough as the perfect watering hole to end your 24 hours in Ghent. Housed inside the 1898 Post Hotel (mentioned below), this upscale cocktail bar feels like walking into a rich person’s private palace bar. The decor is impeccable, the sunset views over the canal are unparalleled, and their drinks are top notch. Many of their cocktails feature an ingredient I wasn’t familiar with — jenever, a juniper brandy traditional from Belgium — which pairs nicely with a number of traditional cocktails like Old Fashioneds or Gin and Tonics. The price tag for cocktails at the Cobber is steep, but worth it. 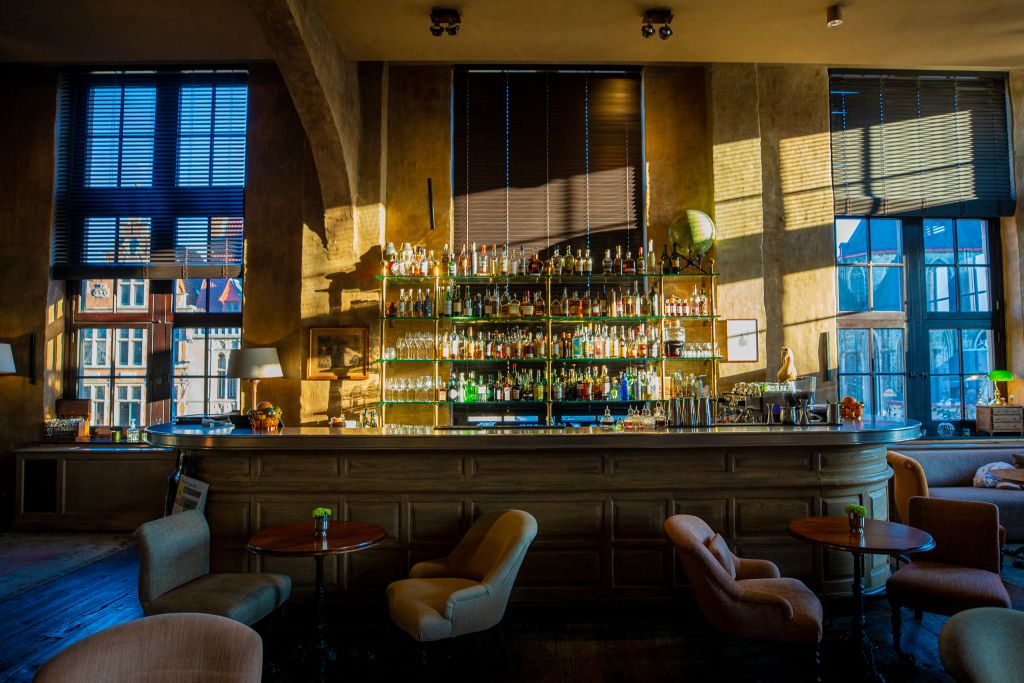 How to Get to & Around Ghent

Ghent is really easy to get to, no matter what mode of transportation you are using. If driving, there are several easy highway routes to arrive in Ghent. We came from Brussels, and the drive took about 50 minutes. Once in the city, paid parking is widely available in garages. It is important to remember that the old city (aka if you cross over one of the canal bridges) is a camera-enforced pedestrian zone and cars need to be registered. This is easy to do with your hotel, but don’t forget because it is a pricey fine if you park in this zone without authorization.

If taking public transportation, this hidden gem is only half an hour away from Brussels by train. The main train station in Ghent is called Gent-Sint-Pieters and it is located about 10 minutes away from the old city center. It is also really close to Bruges, which is 30 minutes by train to the east of Ghent. From either Brussels or Bruges, you could easily visit Ghent as a day trip although I hope this blog post convinced you that it is worth at least an overnight stay.

Like so many other Belgian cities, Ghent itself is super walkable and bikeable. You’ll see locals and tourists alike exploring Ghent on two feet or two wheels! Ample affordable public transit is also available within the city. The streetcar is really convenient, especially if you are coming from the main train station. 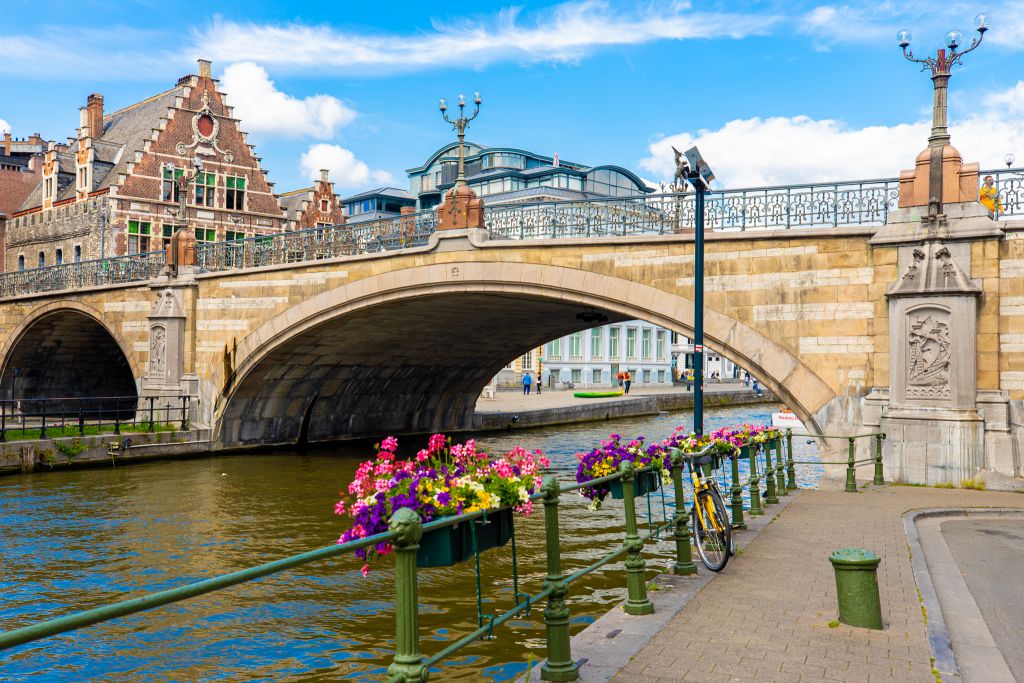 Where to Eat in Ghent

The historic city of Ghent offers an excellent selection of great food, ranging from casual pubs to high-end fine dining. You can really feel the pride and pleasure residents take in their restaurant scene. Located in the heart of the Flanders, you will find comforting Flemish specialities in Ghent. Rich fish stews and cured meats are only the beginning! Additionally, foodies can discover exciting global cuisine, veggie forward menus, and the freshest seafood you could want in Ghent. To find my restaurant suggestions for breakfast, lunch and dinner, please read my Ghent Restaurant Guide.

Where to Stay in Ghent

With an unparalleled location on Ghent’s main square and newly renovated interior, 1898 The Post is an obvious choice for boutique accommodations in Ghent. I have stayed here on every visit to Ghent, and I can’t recommend it enough. This 19th-century, neo-Gothic post office building has been converted to a 38-room hotel with plush accommodations and unique design. We loved our comfortable stay in a lofted room with a private balcony overlooking Saint Nicholas’ Church! There is a grocery store in the basement and a concept store on the main level. 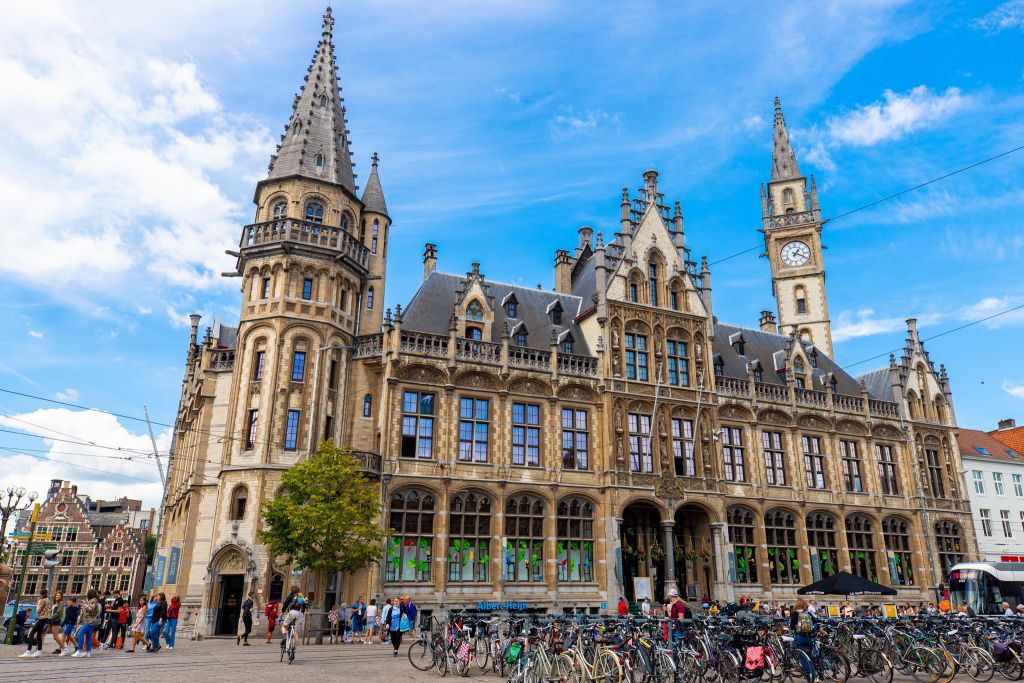