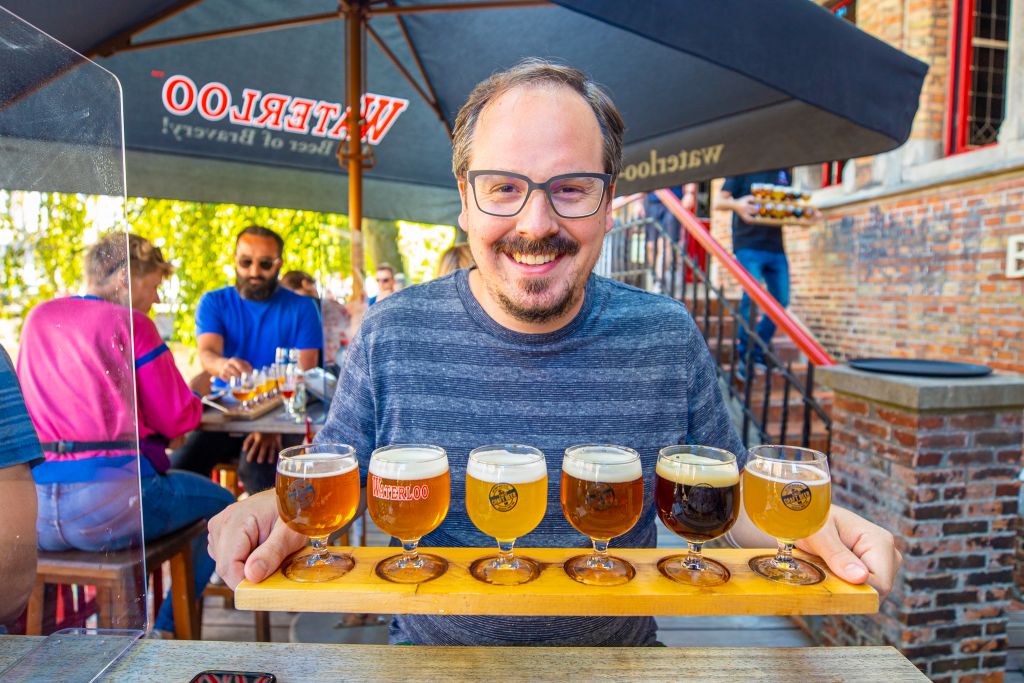 Grain, hops, yeast, and water. The ingredients to brew beer are pretty simple. Yet there are a seemingly endless number of ways that the end product –beer– can turn out. Nowhere is this more evident than Belgium. Belgian beer is world-renowned, thanks to its unique styles and abundant brewing. In fact, Belgium’s beer culture is on the UNESCO List for Intangible Cultural Heritage! From the different types of beer in Belgium to where to find good bars in Belgium, I hope this post will help you enjoy the best beer that Belgium has to offer.

My husband Sam used to work in a craft beer bar in Madison Wisconsin, and one of the tap specialities were Belgian beers. He grew to love Belgian beers, in particular sour ales and lambics. So you can imagine his enthusiasm when we moved to Cologne, Germany, which is only a 2 hour train ride from Belgium. A beer-focused trip quickly shot up on our travel priority list.

There is a lot to know about Belgian beer culture, and I can understand if you are feeling overwhelmed by all the styles of beer and different glassware you need to drink out of. I myself am not a huge beer drinker, so I let Sam plan most of our beer related stops during our one week tour of Belgium. Written in collaboration with my resident beer expert, this comprehensive Belgian beer guide gives you all the information you need to know about drinking beer in Belgium!

Everything You Need to Know About Belgian Beer 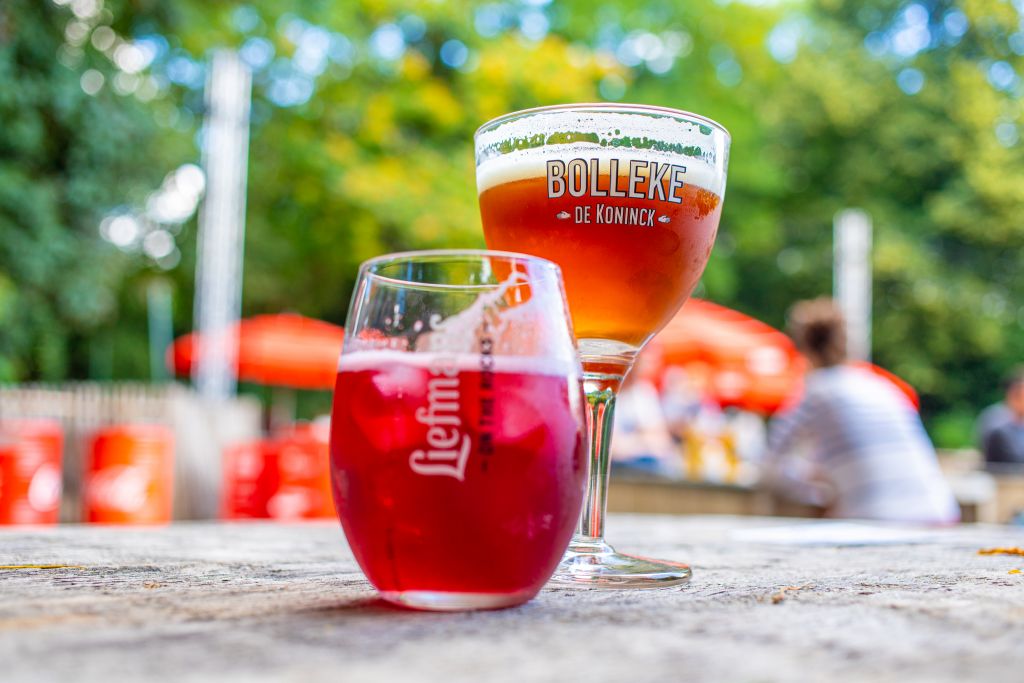 Beer brewing in Belgium goes all the way back to the 6th century. The origin of beer in Belgium is closely linked to religious abbeys and monastic communities. Much of this production had to do with the fact that water was unsafe to consume, so beer, a safer and cheaper alternative, became the preferred drink of Belgians. Low alcohol content beer was even drank by Belgian children!

In the 9th century, beer brewing became a legal mandate handed down from Charlemagne himself. This brought a certain ‘officialness’ to beer production in Belgium that allowed the practice to flourish throughout the middle ages. Additionally, tax benefits for beer brewing were introduced in the pre-modern period, giving the monasteries a financial incentive to continue production.

Belgium’s unique location in Europe helped bolster the brewing industry, thanks to lessons learned from the alcohol cultivation practices of its various neighboring countries. Belgians took knowledge about oak aging and microbiology from France, while yeast management and lager fermentation were appropriated from Germany. The introduction of hops and brewing standards can be attributed to their neighbors across the channel – England. This mishmash of influences encouraged Belgians to develop practical workarounds and create unique beers distinct to their region.

One of my favorite parts of Belgian beer culture is the specialized glassware. You’ll notice it immediately when you walk into a pub – there is likely to be a whole wall of different shaped and sized glassware behind the bar! Each beer is poured in a specific and dedicated type of glass, which will typically only be used for that beer or brewery.

From goblet to tulip, a lot goes into a brewery’s decision about the style of glassware, such as the level of alcohol, desired serving temperature, and level of carbonation. The main reasons that a Belgian brewery requires a bar to use it’s glassware are:

There is also an entire ritual to the pouring and serving process of beer. It involves a number of steps, including serving the beer at the right temperature, keeping the glass at the correct angle while pouring, and raising or lowering the glass to create the appropriate level of head & foam. Belgians seem to treat it as an art form, displaying immense levels of care and intention. 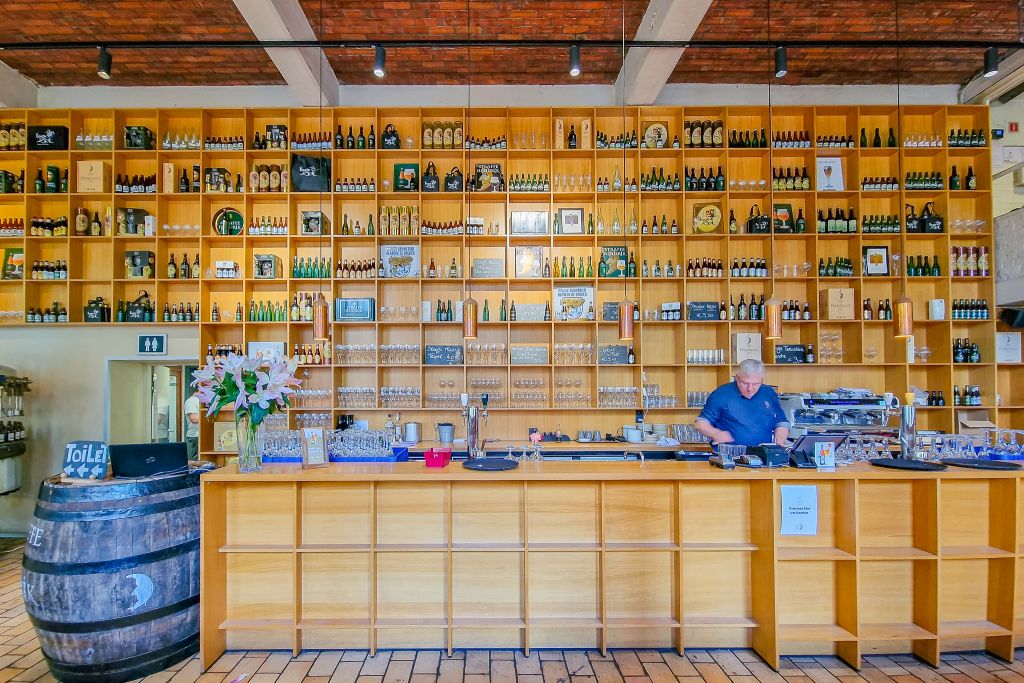 Blonde beers are ales that are golden or blonde in color, hence the name. Generally unfiltered, the flavor is not too hoppy or bitter. They are slightly sweet and have an alcohol content ranging from 5 to 8 percent. Many breweries produce beers of this variety and they vary in strength, flavor, and other characteristics, but Belgian Blondes tend to have flavors of banana and clove, especially when brewed with Belgian yeasts.

Recommendation for Blondes to Try in Belgium

A great (and widely available) example of the Blonde style is Duvel – 8.5% ABV from Brouwerij Duvel Moortgat 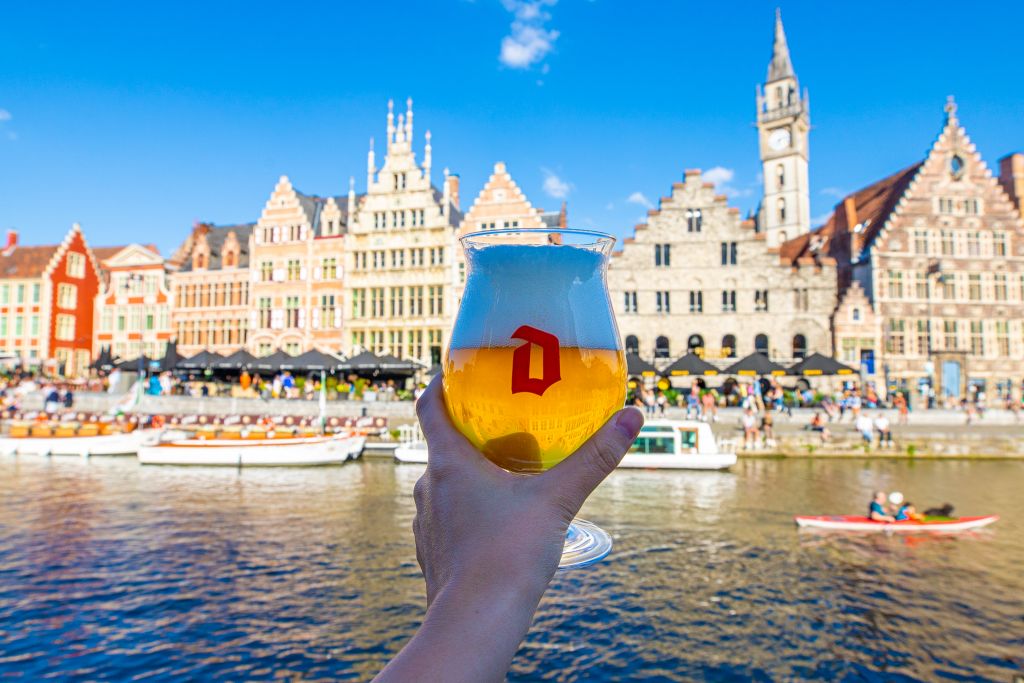 Trappist is more of a category of beer, rather than a style. It denotes that the beer was brewed at a monastery in a traditional manor by Trappist monks. There are currently 13 trappist breweries, with 6 of them being in Belgium. Historically, the beer was brewed to sustain the monastery financially and the monks nutritionally. There are 3 main styles of Trappist beers: Dubbel, Tripel, and Quadrupel.

Dubbels are strong (6-8%), brown ales with a heavy body, low bitterness, and a fruity, malty sweetness. They tend to be double fermented, giving it the name. The fruit flavors are generally darker fruits, such as dates, plums, prunes, and raisins, while the malty flavors can be reminiscent of chocolates, caramel, or nuts. These combined flavors give a large complexity to dubbels and leads to a wide variety of flavor profiles.

Recommendation for Dubbels to Try in Belgium

The original Trappist Dubbel was brewed by Westmalle, but now you can find many other breweries producing a similar style. A well known one is the Westvleteren 8 Dubbel -8% ABV from Brouwerij Westvleteren 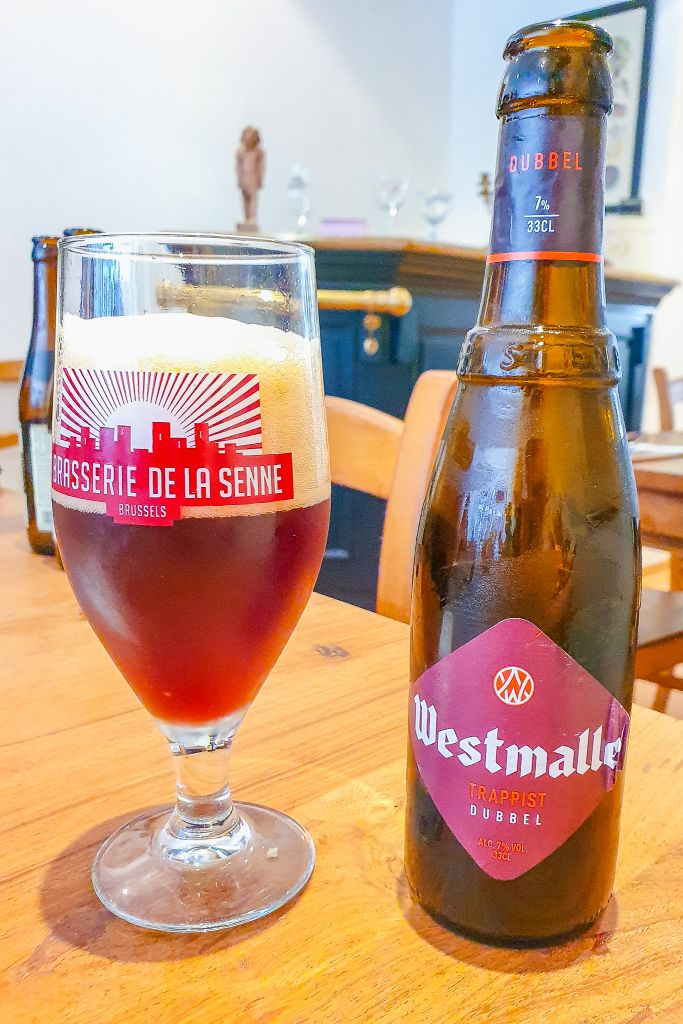 Tripels are similar in color and style to Blonde ales, though they tend to be a little higher on the alcohol content (8-11% ABV). Tripels are triple fermented, hence the name, with the last fermentation taking place after bottling. As a result, these are one of the types of beers that can get better with age. It needs to be stored properly (similar to wine), but the aging will continue for 2-5 years.

Recommendation for Tripels to Try in Belgium

A great example of a Tripel beer again comes from Westmalle. One of the original brewers of this style, it is now replicated by other breweries from around the world. 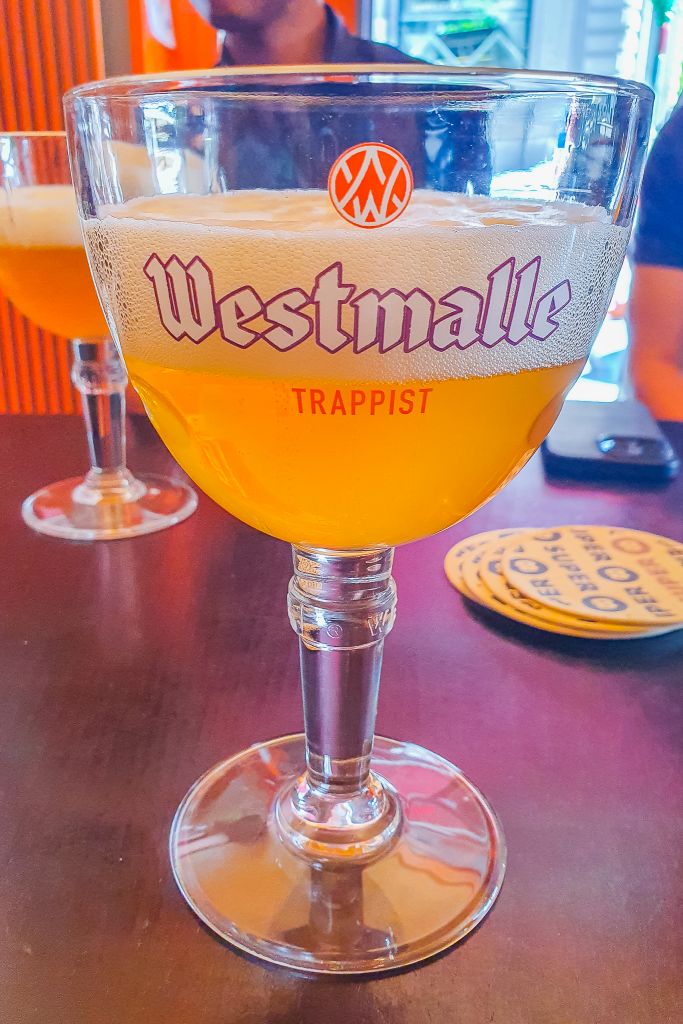 The strongest of the Trappist varieties, Quadrupels range from 10 to 14 percent alcohol content. Like the other trappist beers, it is named from the four steps of fermentation. They are similar to Dubbels in that they often have very complex flavor profiles of dark fruits and nutty caramels.

Recommendation for Quads to Try in Belgium

Sam’s favorite Quadrupel in Belgium was Westvleteren 12. This can be hard to find, since it is a small batch production. It only comes in unmarked bottles, so you likely need to get it at bar rather than a bottle shop. De Halve Maan brewery has a good Quad too. 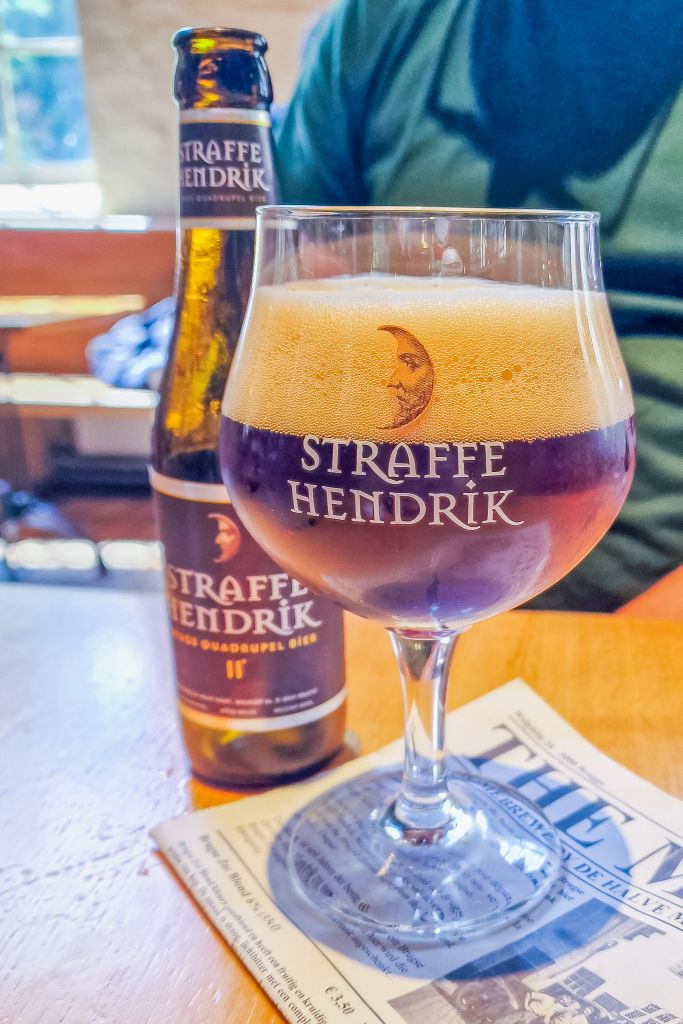 Lambics are a type of sour beer, unique both in flavor as well as brewing technique. These beers are produced by spontaneous fermentation. This means that the beer is left open to exposure of wild yeasts and bacteria. This unique method gives the beer a dry, cidery flavor, often with tart aftertastes and relatively little carbonation. Originally created as a way to turn water potable, this easy drinking beer style has grown and developed over the years.

Recommendation for Lambics to Try in Belgium

One of the most popular lambic breweries in Belgium is Lindemans. They’ve got a number of styles, especially in the fruit beer category (more on that below), but their classic lambic is call Faro -4.2% ABV. 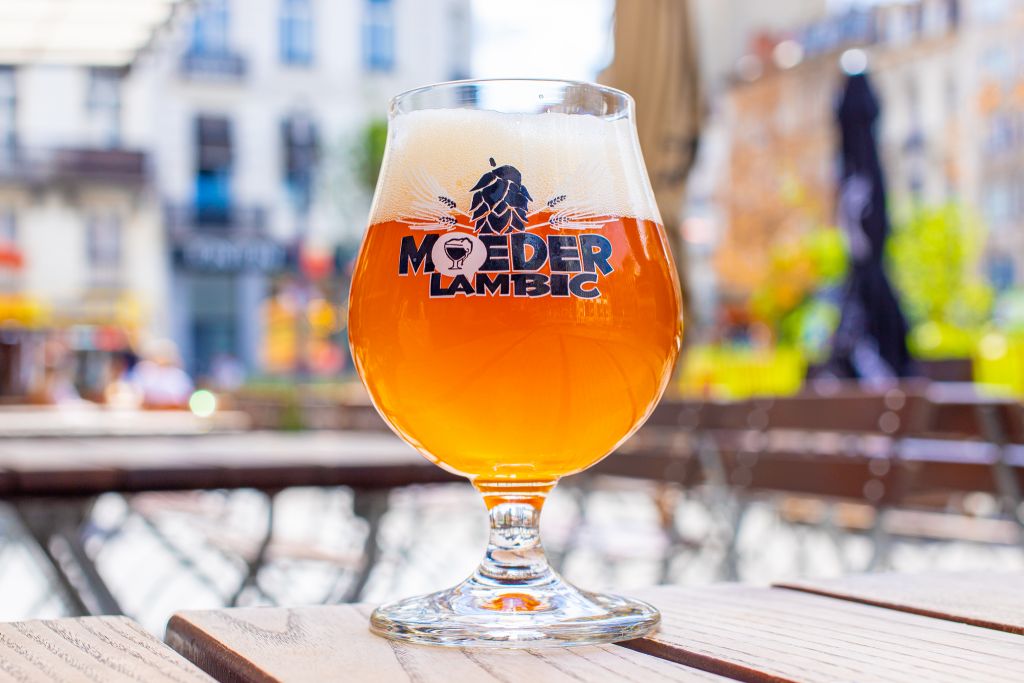 Gueze is a type of Lambic beer that has been blended and aged. It usually comes in two styles: dry and sour. By bottling young lambics (less than 1 year old) with older lambics (12 months or more), the young lambic undergoes a secondary bottle fermentation. This process produces carbon dioxide giving them a slight carbonation in the bottle. These bottles are then aged at least for one year before enjoying.

Recommendation for Gueze to Try in Belgium

My personal favorite Gueze is the 3 Fonteinen Oude Geuze -6% ABV by Brouwerij 3 Fonteinen.  The Gueuze from Cantillon is one of the best known, and it is also delicious. 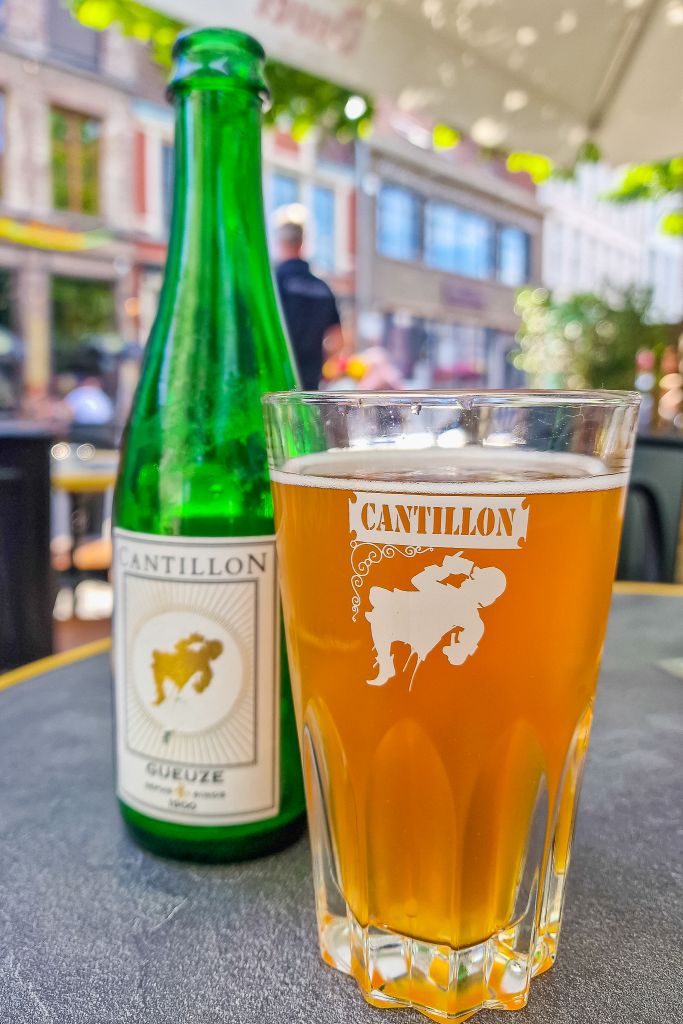 These are beers that have had fruits added to them during the brewing process. One common variety is the Kriek Lambic, which is a Lambic beer that has been brewed with sour cherries. Other fruits can be used with the most popular being raspberry, peach, and black currant. The beer doesn’t necessarily have to be a lambic but it often is. Fruit beers are typically sweet, but not always. They can be quite sour actually, especially if made with sour cherry or black current. Fruit beers are really Instagrammable, coming in an assortment of bright hues and colors. You’ll see them typically poured in tall glasses or tulip glasses.

Recommendation for Fruit Beer to Try in Belgium

The Hanssens Kriek Lambic is a great example of a sour Kriek lambic,  but Lindemans and Haacht Brewery both have good ones.

Traditionally made from the leftover grain during the harvest and drank by seasonal workers, Saison literally translates to seasonal beer. The flavors can be super diverse, but usually Saisons are refreshing, dry, hoppy, and fairly bitter. Commonly you’ll find that Saisons are highly carbonated with aromas and flavors of citrus and pepper.

A specific type of Saison that is worth trying is Seef beer. Pronounced as ‘safe’, this opaque beer originates from Antwerp. It was once popular in the city with dozens of small breweries making it. In the early 20th century, it fell out of fashion when it became associated with ‘working class people’. Now ironically called ‘the Champagne of the poor people’, Seef was revived in 2012. An Antwerp based brewery went through a painstaking process of rediscovering the recipe, which was thought to be lost. The effort paid off when a couple of years later Seef won a gold medal at the World Beer Awards.

A classic and well regarded Saison is the Brasserie Dupont’s Saison Dupont Vieille Provision, known simply as “Saison Dupont“. For Seef beer, try the Seefbier -ABV 6.5%. You can see the vintage inspired logo in the photo below! 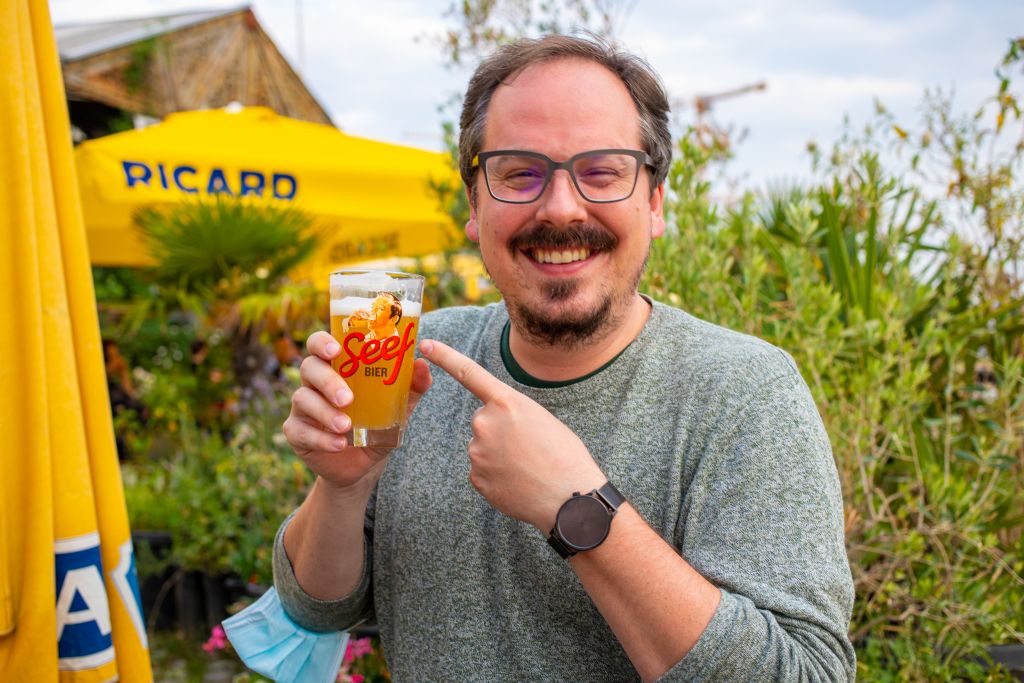 Although this style isn’t as common as some of the others on the list, Oud Bruin is a traditional and authentic Belgian brown beer. This family of beers typically comes in reddish-brown or brown color with a sweet or color flavor profile. Imagine a lambic and quad had a baby. That’s kind of what Oud Bruin tastes list. Typically you will taste caramel-chocolate malt flavor and a red-fruit complexity. Sometimes there is a dry, tannic finish like a vintage red wine.

Recommendation for Oud Bruin to Try in Belgium

A delicious example of the Oud Bruin style is the Rodenbach Vintage – 7% ABV by Brouwerij Rodenbach. 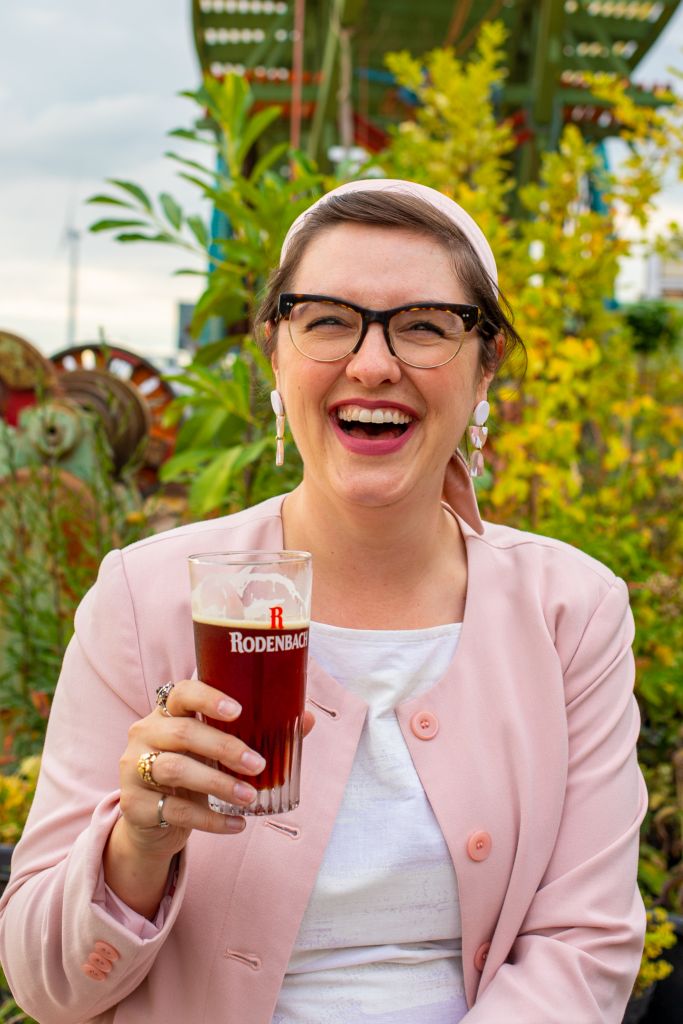 The Best Beer Bars in Belgium

Where to Drink Beer in Brussels

2) Au Bon Vieux Temps: one of the oldest bars in Brussels, dating back to 1695. It is tucked away in an alley and easy to walk past.

3) Moeder Lambic Fontainas: Great Lambic selection among other styles. It has a nice patio located outside the touristy area

Where to Drink Beer in Antwerp

2) Bar Paniek: Old junkyard pub along the harbor with fun decor and industrial architecture. You can spend hours here.

3) De Koninck: With a massive patio full of brightly colored umbrellas, this bar is a great place to relax and take a brewery tour. 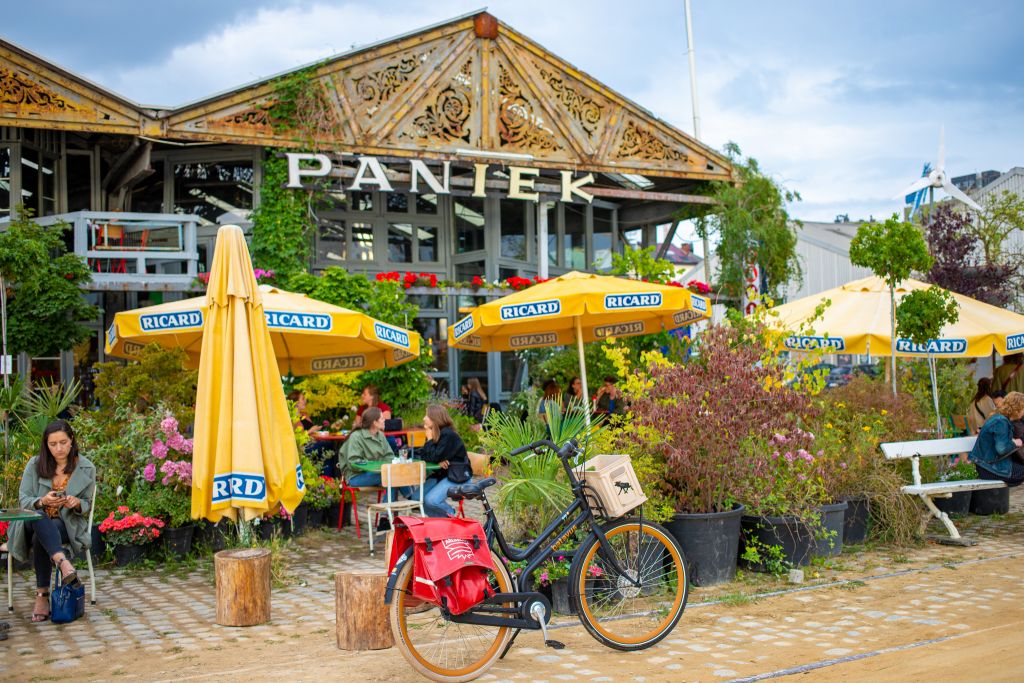 Where to Drink Beer in Bruges

1) Kasteel Minnewater: This bar & cafe has a really cute terrace offering a lake view next to a picturesque mansion

2) Huisbrouwerij De Halve Maan: The most famous brewery in Bruges with a beer pipeline running directly into city

3) Brewery Bourgogne des Flandres: Centrally located along the canal, there is a nice selection of sours as well as a beer flight.

Where to Drink Beer in Ghent

1) Trollekelder: A funky troll themed bar with an impressive 200 beers on the menu and a nice patio next to a church

How to Plan the Perfect24 Hours in Ghent