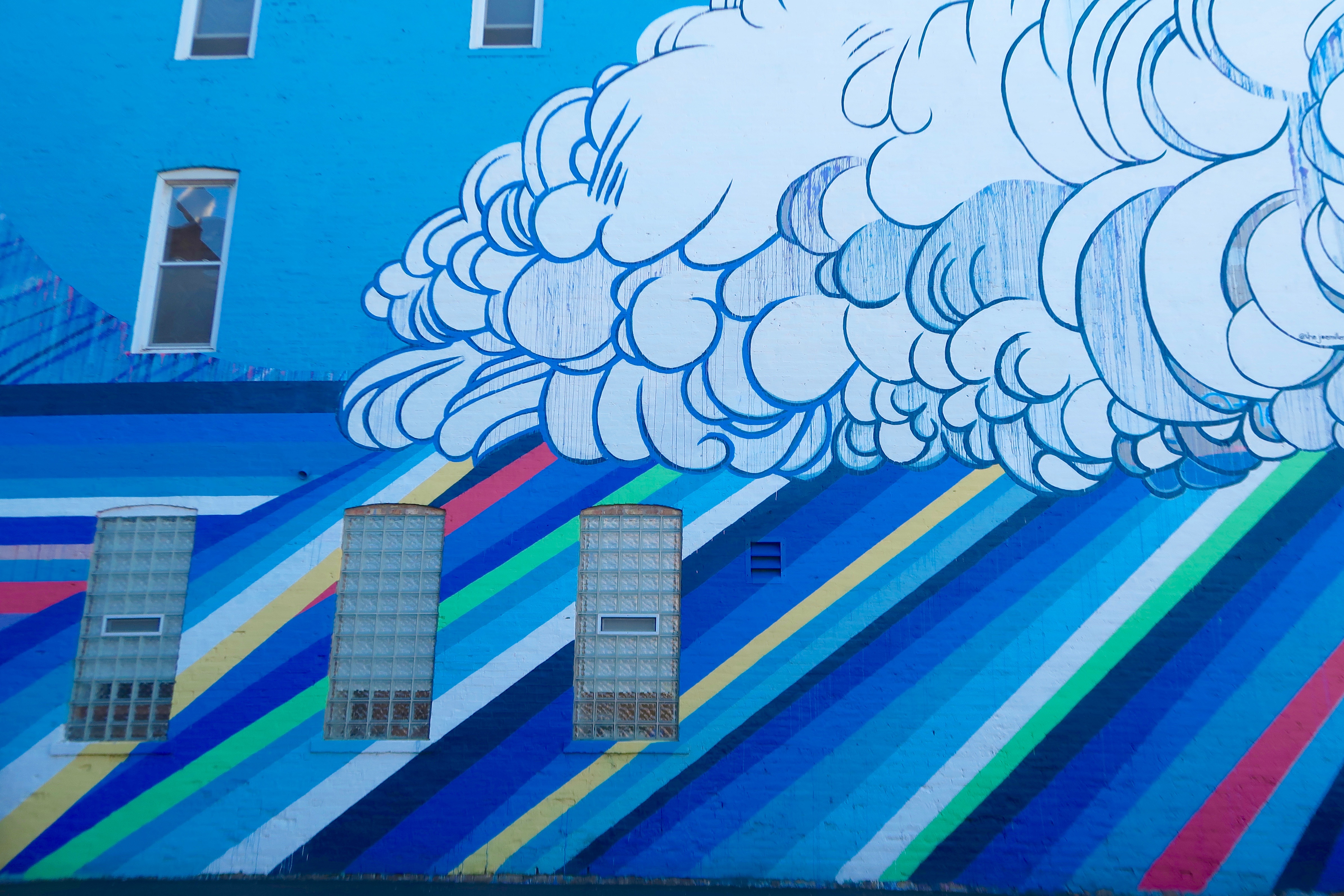 As a Chicago resident, I love seeing new public murals popping up and get excited when I discover a new one!

Here is my guide to seeing the 12 best street art murals in the Wicker Park neighborhood of Chicago! 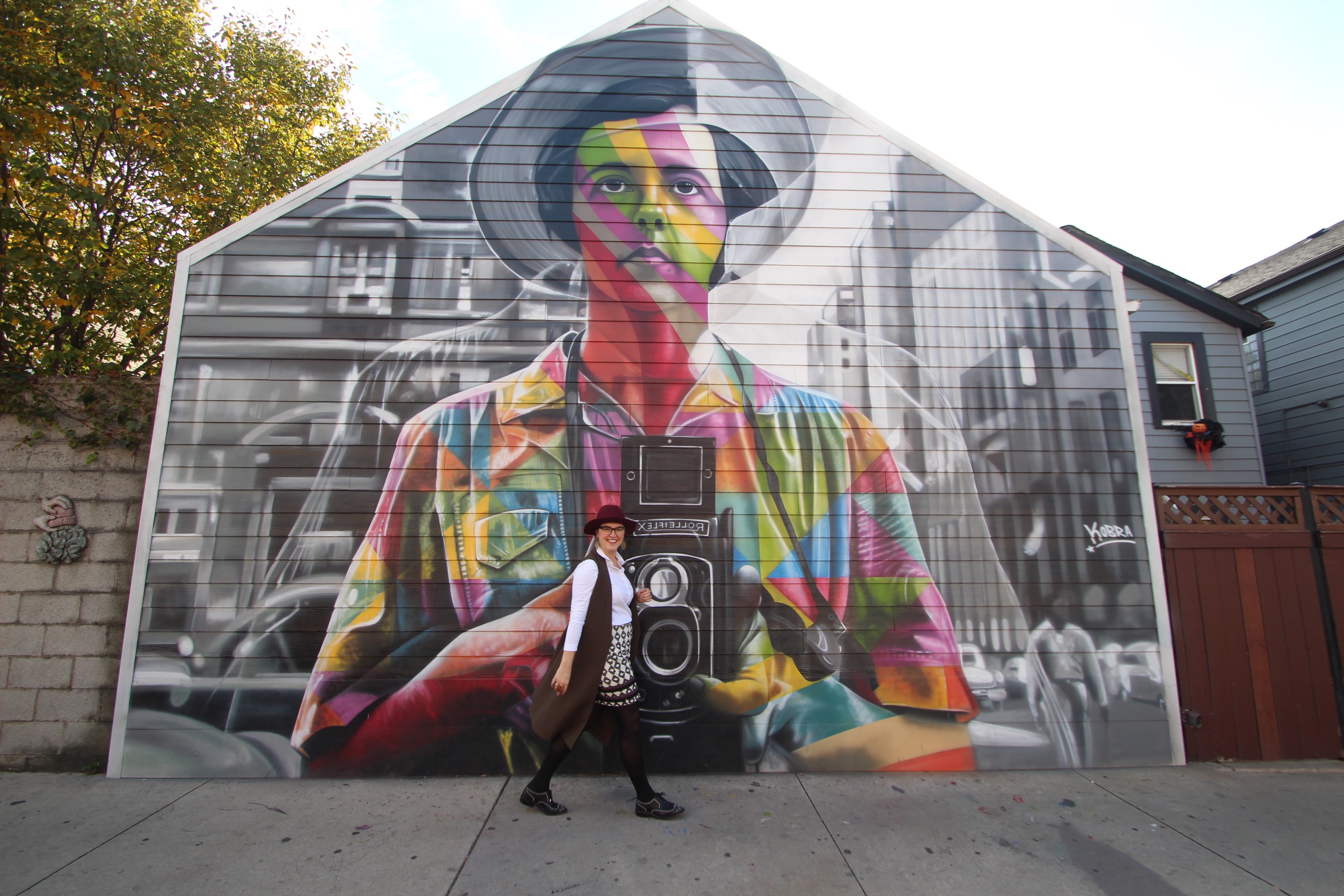 Distinguished Brazilian street artist Eduardo Kobra painted a unique and engaging mural of one of Chicago’s famed photographers, Vivian Maier. She was a prolific street photographer in the 20th century whose talent was only discovered after her death when her pieces were auctioned off during an estate sale. This mural is meant to be a tribute to her work.

Spanning the entire side of a building, the large scale street art mural by Joe Miller is a playful piece full of color. It depicts a cloud, gusts of wind and off-color rainbow. Just looking at it makes me smile!

A fairly small street art mural, you can easily miss the North Avenue alley where the Eyes piece by My Dog Sighs is located. My Dog Sighs is a British street artist with famous murals around the world, many of which feature his incredibly realistic eyes as a centerpiece of his melancholic works. In this mural, there are lots of bright colors and geometric shapes surrounding the almost haunting green eyes.

The largest of the murals on this guide, the massive 42-by-90-foot Park No 567 (also known as the ConAgra) mural was painted by locally acclaimed muralist Jeff Zimmermann. All of Jeff’s pieces depict human and nature inspired scenes with real portraits of neighborhood residents. For the best view of this piece, walk up to the Bloomingdale Trail overpass.

Another rotating mural, the Hollywood Cleaner’s mural changes a few times a year to feature different up-and-coming street artists. There might be one large mural or a few smaller ones, and they are typically seasonal.

In a two-for-one, simply turn around from the Hollywood Cleaners to discover the next Wicker Park street art mural, the Brooklyn Industries mural. Painted by Czr Prz, this graffiti style piece feels perfectly urban fitting in well with the neighborhood.

Probably the most recognizable of the Wicker Park street artists is JC Rivera, whose bear characters can be found painted throughout the neighborhood. Over the course of his 9 year career as an artist in Chicago, Rivera has painted lots of pieces including the bandaid bears piece you can find on Milwaukee Avenue.

Tacos and art in one stop? Consider me interested! You can find a colorful piece by graphic designer and artist Ira Kruglova painted along Antique Taco’s patio at the Wicker Park location. The colorful and Instagrammable mural features images of Frida Kahlo, llamas and cacti.

Painted by Noelle Roth in 2017 as a way to revitalize Urban Belly’s patio, the vibrant tropical themed mural features technicolor leaves and a tiger tail. This is a popular spot to snap an instagram post and don’t forget to use the hashtag #ubjungle to feature the mural online!

Along the alley next to the Toms store on Damen Avenue, there are occasionally hidden murals painted. They rotate throughout the year, and sometimes there aren’t any located there. But occasionally you find amazing ones, such as the #KindComments series from 2017.

Created by Hebru Brantley, one of the most prolific artists in Chicago, Nike Running is the next street art mural to discover in the Wicker Park neighborhood of Chicago. Brantley’s work always contains his iconic glass-clad characters typically depicting scenes of nostalgia, power and hope.

Located on the ramp heading up to the Bloomingdale Trail is where you can discover a colorful piece by Tony Passero. Playfully named the “Coy Wolf” mural, I bet you can guess what this mural features—wolves! I actually saw Tony painting this piece in 2017 and fell in love with it. His style combines Latin, Creole and Tribal tones and are always very colorful.

Are you ready to visit all of these beautiful murals? Pin the image below so you don’t forget any of them!