Here are my 13 favorite street art murals to discover in the Logan Square neighborhood of Chicago.

Local artist Darius Dennis painted the Lucha mural in late 2018 to depict the bond between community and environment as part of a climate resilience project spearheaded by local cooperative grocery store Dill Pickle. The mural tells the store of change and resilience in the neighborhood to honor but not forgot the history of Logan Square.

Unveiled in late 2017, this controversial yet vibrant mural was painted by local artists Sandra Antongiorgi and Sam Kirk to celebrate the diversity in Logan Square while also depicting concerns of the increased influence of gentrification.

Fullerton and Milwaukee Under CTA Tracks

Tucked just under the CTA train tracks along Fullerton Street, this rotating gallery is painted and repainted every few weeks. Typically featuring graffiti style designs from amatuer artists, you’ll notice something different on all sides of this building.

Another recent addition to the neighborhood, famed Chicago street artist Joseph Perez (also known as Sentrock) teamed up with the Chicago Bears to paint this colorful and team-spirited mural on the side of soon-to-open taco restaurant Big & Littles.

Visible from one of the neighborhood’s most famous attractions, the Bloomingdale 606 Bike Trail, FQ Art’s sprawling painting on the side of Donut Delight depicts his iconic dinosaurs painting a Chicago mural of their own with the help of adorable spray cans that have come to life.

Along the north and west facing walls of the Dollar Tree, you can find a collection of characters and murals from several famous Chicago artists including FQart’s dinosaur, Myron Laban’s parent and child and Amuse 126’s abstract graffiti style piece. 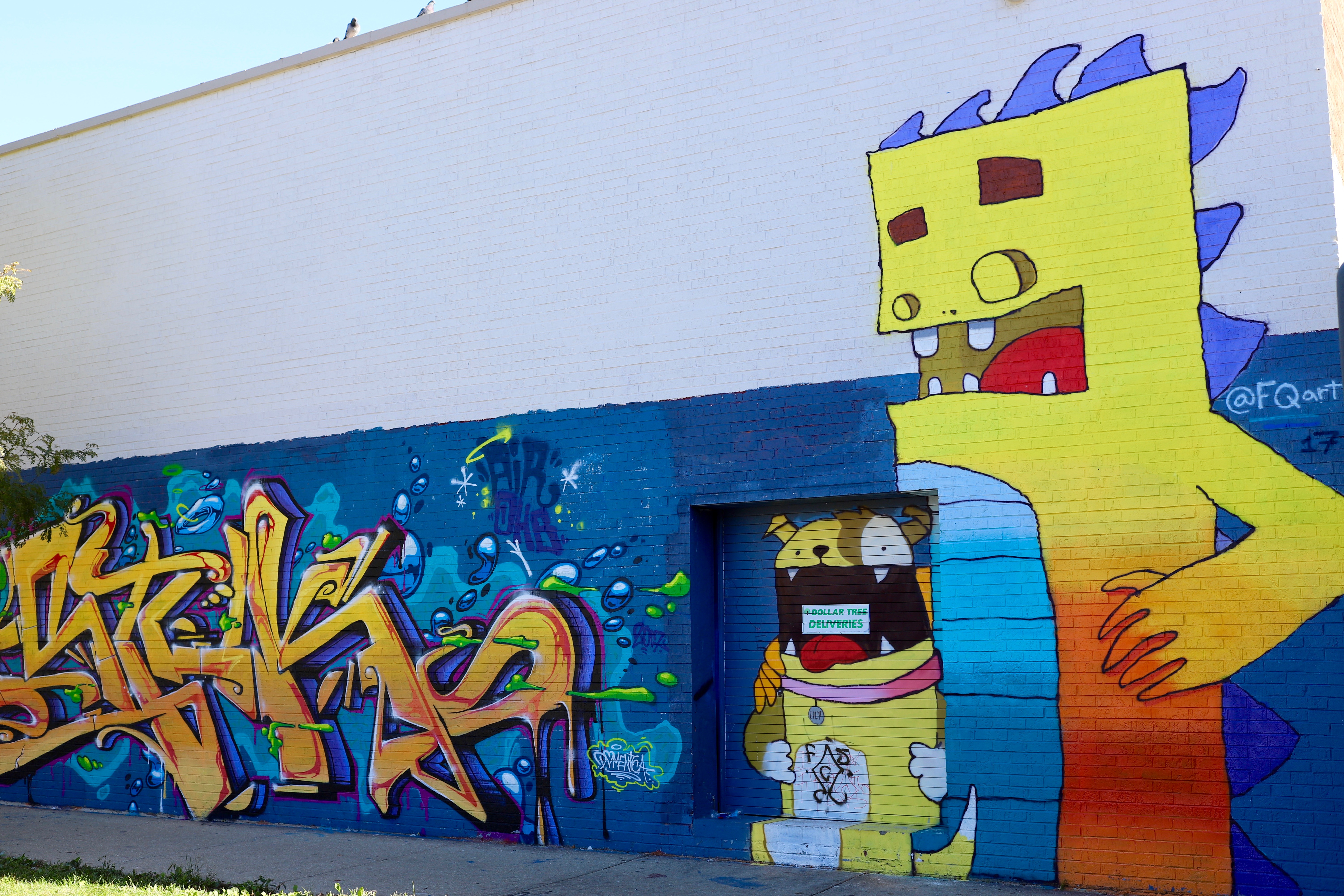 Perhaps the most photographed of all the murals in Chicago, the “Greetings from Chicago” mural was designed by muralist Victor Ving and photographer Lisa Beggs who have been traveling full time out of their RV for the last 3 years. They aspire to paint a greetings mural in every state in the USA and the Chicago mural was one of their first ones to be completed in 2016.

Easily viewable from the Greetings from Chicago mural above, Kristine Campbell’s wholesome mural depicts all the essentials the artist enjoyed during a long weekend staycation at home. You can learn about what each image means to the artist on her blog!

Painted by Chicago-based muralist Josue Pellot, the Pink Wall mural is one of the newest murals in Logan Square. Pellot’s work typically consists of large scale lettering with thought-provoking phrases painted over patterned or colorful backgrounds.

Similar to the Fullerton Gallery wall, Family Thrift on Milwaukee Ave offers a rotating assortment of murals from up-and-coming street artists. They change every few weeks, but there usually at least 3-5 murals by different artists splattered across the walls of this building.

One of the newest murals in Logan Square, the massive Robin Williams mural on the side of Concord Music Hall took New York street artist Jerkface and New Zealand artist Owen Dippie an entire week to complete. Although unconfirmed, there are rumors that this street art mural was commissioned and debuted in September to raise awareness about suicide prevention during suicide prevention month as a tribute to native Chicagoan Robin Williams who struggled with depression throughout his career before taking his own life at the age of 63.

Are you ready to visit all of these murals? Pin the image below so you know exactly how to find them all!