February 2, 2020 Argentina, Where to Eat Abroad 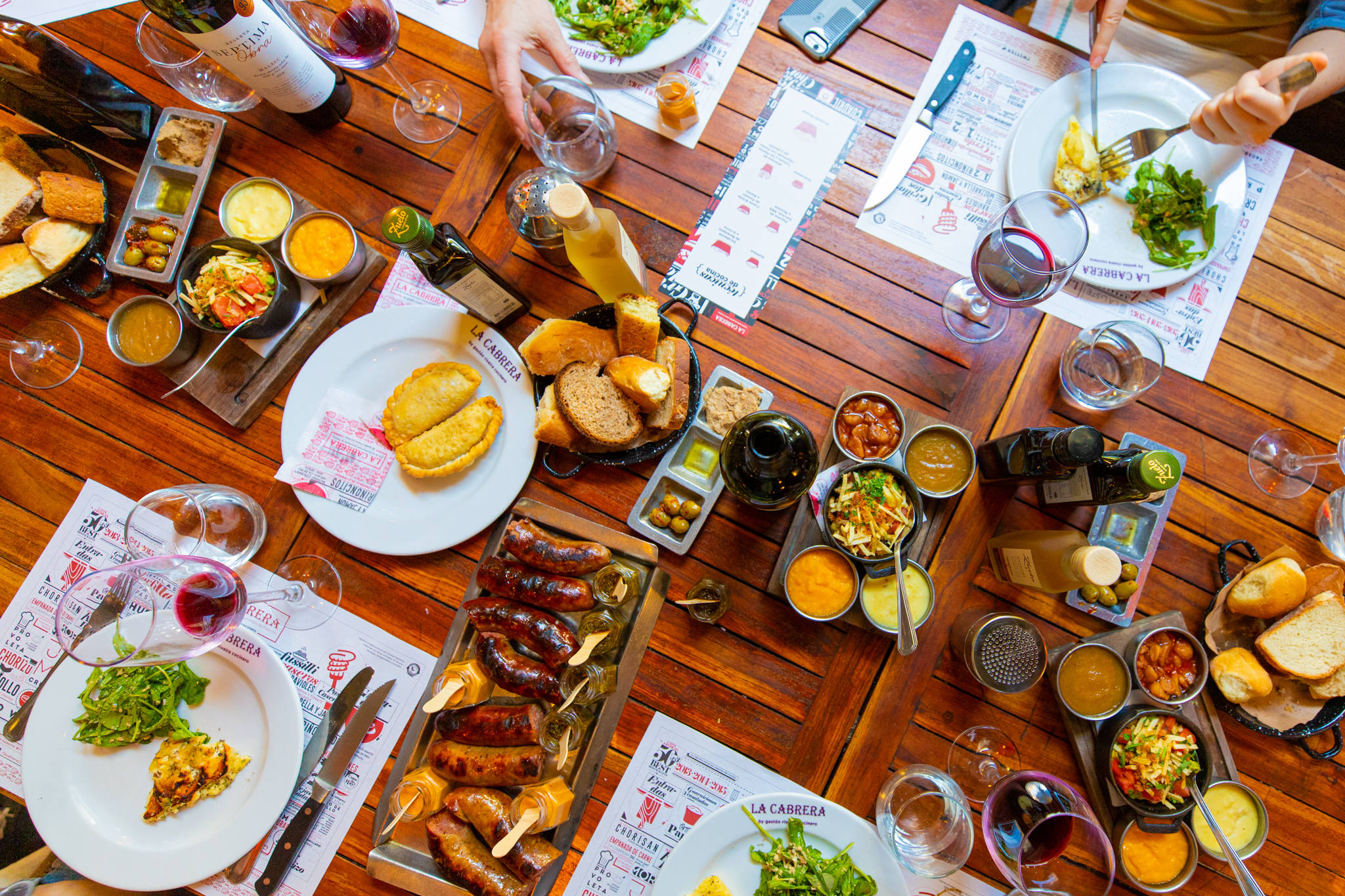 Far more than just red meat and Malbec, Argentina’s capital city of Buenos Aires offers a diverse – and delicious – culinary scene that rivals cities around the world in its quality. I was incredibly excited about and impressed by the meals that we ate in Buenos Aires because I felt like I really understood what modern Argentinian cuisine looked like, but also got a sense of the global influence that has made this city so unique.

Buenos Aires is a city where you can eat very, very well on a moderate budget. Typically, my food budgets rival my hotel budgets when I travel (#foodielife), but I found that high-quality meals were about 30-40% cheaper than you would see for similar quality in the US. Even our most expensive Michelin-star quality meal only set us back about $100/person, which by American or European standards is a steal for a 8-course meal with a wine-pairing. Regardless of your price point, there are plenty of delicious restaurants, cafes and fast-casual restaurants to delight your taste buds in Buenos Aires.

Here are the 12 Best Restaurants for Foodies in Buenos Aires! 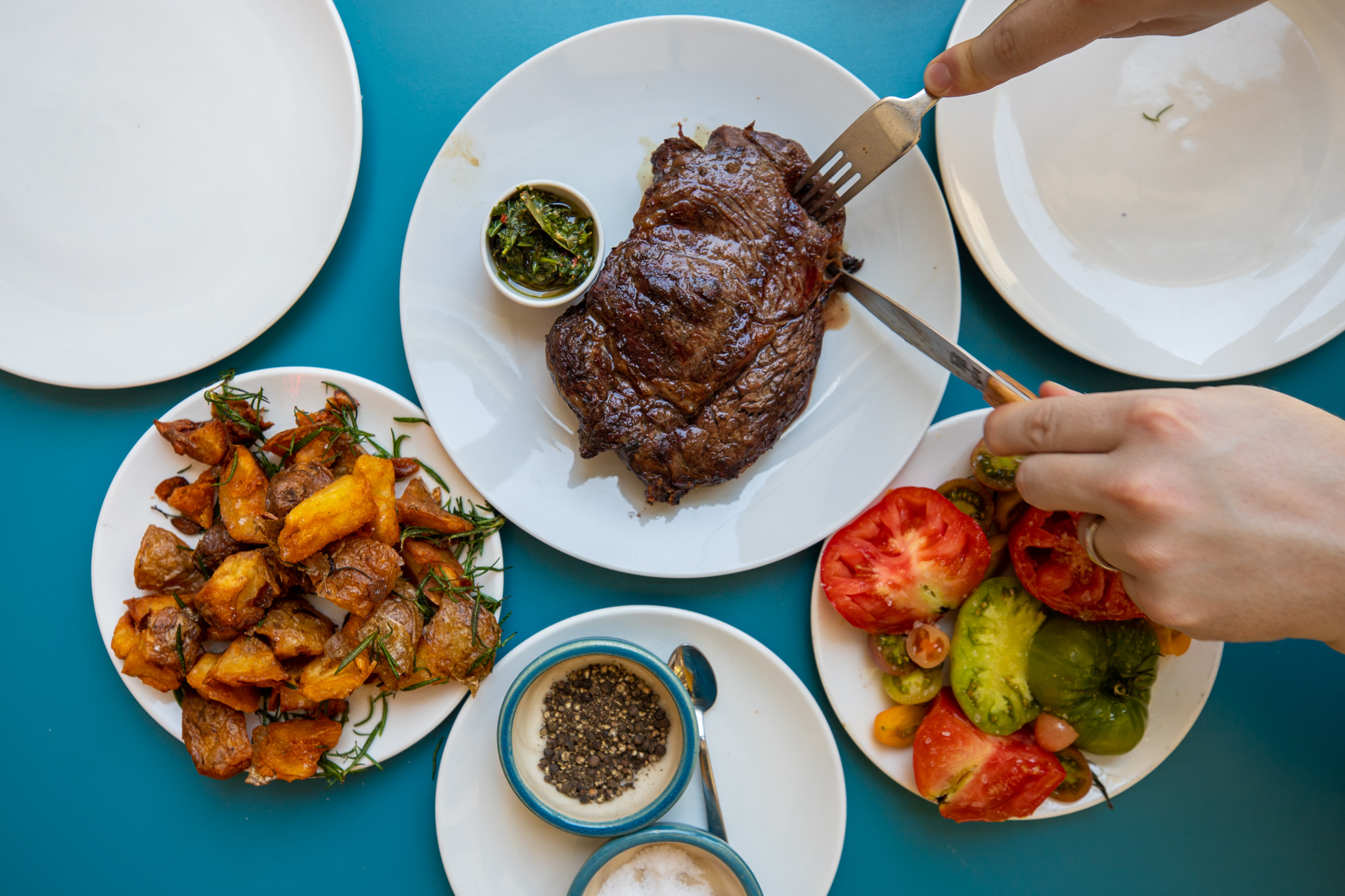 The airy white and blue dining room at Corte Comedor makes you feel like you are eating at a Southern California vegan restaurant; but then you notice the cow shaped halogen artwork on the back wall and smell the smoky woodfired grill, which reminds you that you’re in a proper Argentinian steakhouse. Opened by one of the most renowned butcher shops in BA, Corte Comedor serves up a classically prepared steak with a bevy of delicious vegetarian sides. A particular favorite of mine was the heirloom tomato salad, which was well salted and perfectly fresh. If you want to make your own asado at your AirBnb, pop into the attached butcher shop where you can find fresh and dry aged cuts.

Infamous steakhouse Don Julio has been grilling up some of Buenos Aires’ best steak for decades, and its accolades are well-known by foodies around the world. Featured on TV shows like “Somebody Feed Phil,” you can either make a reservation for one of Don Julio’s tables or line up at least 30 minutes before opening to get a coveted spot. Regardless of how you wind up at a table, the meal at Don Julio is sure to blow you away with perfectly cooked and well-flavored steak and classic Argentinian sides.

In a country like Argentina, vegetarians are an often-forgotten bunch with very few restaurants offering more than a salad. Narda Comedor flipped that dynamic on its head, crafting a predominantly vegetarian and vegan menu. The bright yet well-developed flavors are the brainchild of famed Argentinian female chef Narda Lepes, whose generous portions and rotating menu keeps Portegenos coming back to the restaurant time and time again. I personally loved the trashy tofu and green goddess salad, both of which offered a delightful balance of acid, texture and richness.

Fine dining, at least in the European sense, is still relatively uncommon in Buenos Aires, but Chila bucks the trend with its upscale Michelin quality tasting menu in BA’s fanciest neighborhood. The swanky dining room overlooks the city’s harbor and Puerto Madero, as well as a bustling walking and cycling path, creating a lovely backdrop ambiance for an exceptional meal. Our tasting menu included a range of dishes proudly featuring regional ingredients produced by small Argentinian farms throughout the country, as well as a well-crafted wine pairing of Argentinian only wines. A reservation is required.

Also a long time contender for BA’s best steak, the head chef at La Cabrera decided to distinguish himself on unique sides to accompany the prized beef. An asado at La Cabrera will be served with no less than 10 individual side dishes, ranging from braised garlic cloves, eggplant hummus, niçoise salad, and pickled tomato paste. Their flagship Palermo Soho location is sprawling, but decorated in a way that makes it feel homey and comfortable. Of course their steaks are perfect, but don’t miss the delicious chorizo!

I am a sucker for non-pretentious yet cutting edge restaurants, and iLatina fits that bill perfectly. Aiming to take their diners on a culinary tour of Central and South America, iLatina’s diverse menu prominently features indigenous Latin American ingredients like corn, quinoa, and Chilean seabass. The design of the restaurant whisks you away to another era entirely, with its colorful portrait paintings and nostalgia inducing agave wallpaper. The tasting menu changes regularly, but the price remains very reasonable. The attentive and knowledgeable staff make the meal a true delight. A reservation is required. 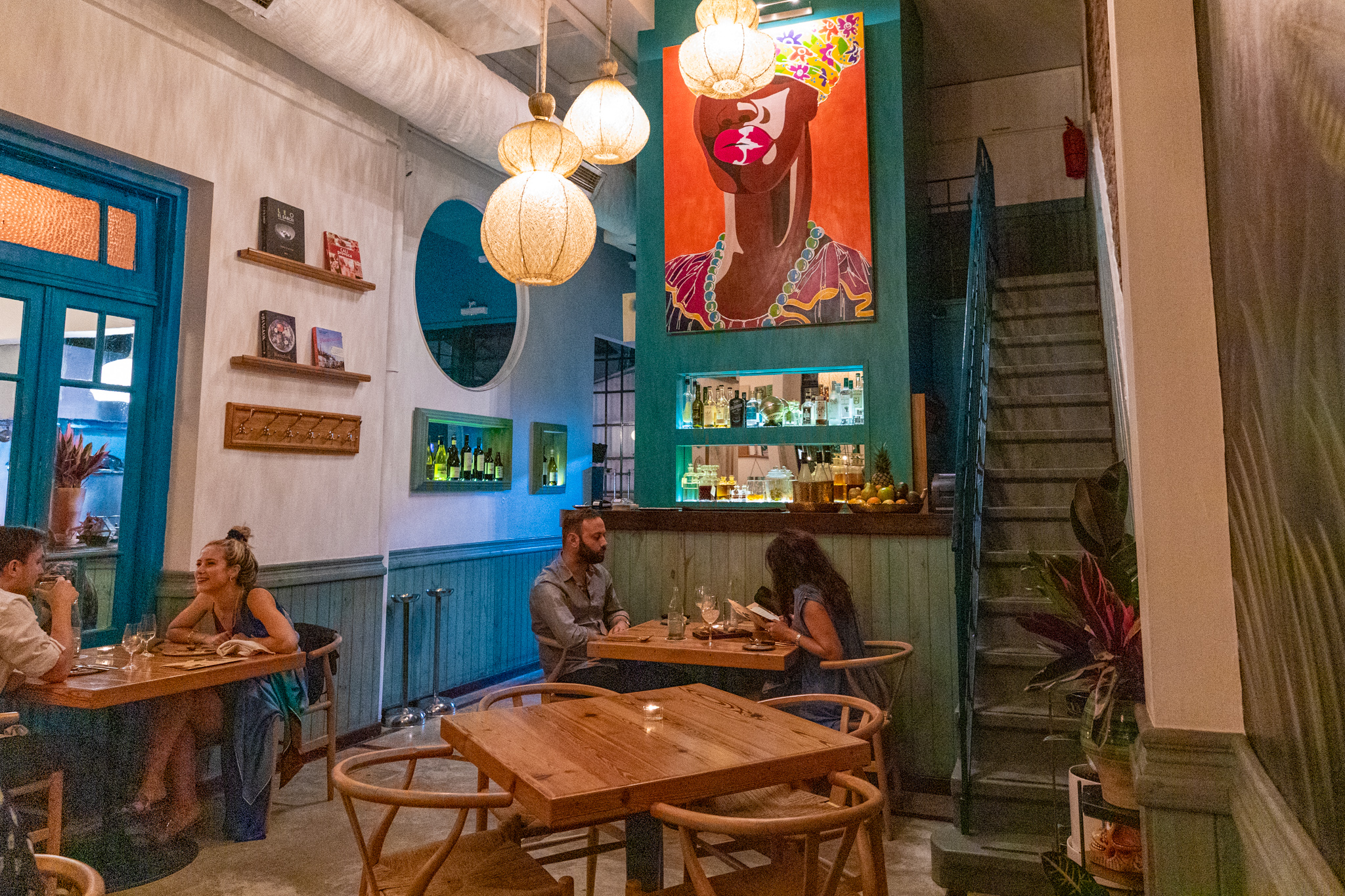 Rated the most Instagrammable restaurant in Buenos Aires, Nino Gordo is SO much more than a pretty package. The Japanese-Korean-Argentinian fusion cuisine that you’ll find here is truly special – this was the most memorable meal we had in BA. From chili fried sweetbreads to a ribeye “PB&J”, the dishes coming out of the kitchen at Nino Gordo are creative, distinct, and truly delicious. Don’t miss their cocktail list either! I recommend sitting at the bar, which overlooks the lively open kitchen where you can watch all the action of meat grilling and dishes being assembled. A reservation is required.

One thing that I miss living in Germany is bagels, so I was thrilled to discover an authentic bagel joint in BA, which was opened by a Jewish New Yorker who relocated to Buenos Aires. Originally started as a bagel cart, the cafe has limited hours so plan your visit accordingly because these bagels shouldn’t be missed. The bagel flavors are simple and the cream cheese is homemade, but what you really need to order is a bagel sandwich. I have been dreaming about the pastrami, egg & cheese bagel sandwich I ate at Sheikob’s ever since. 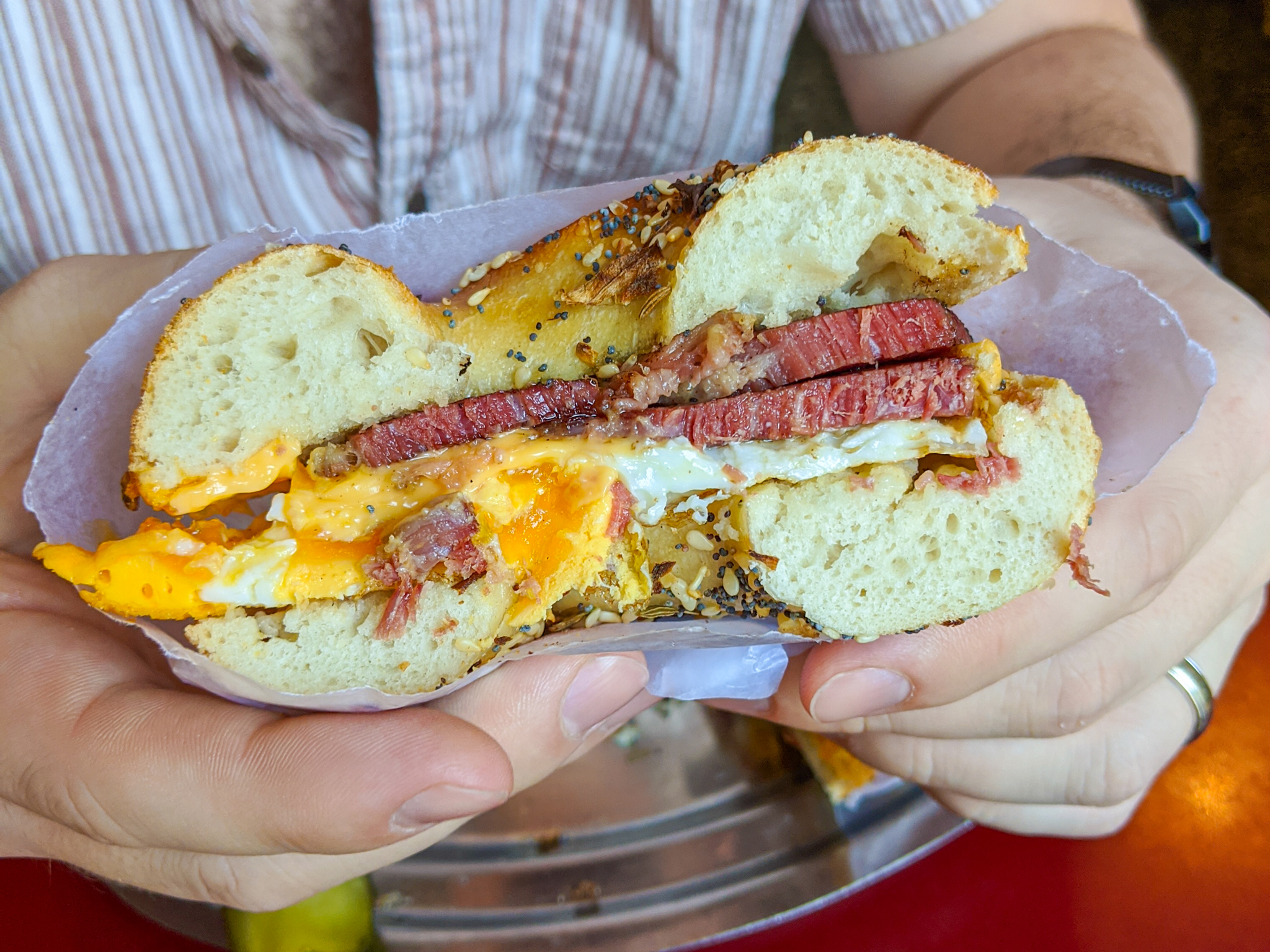 You can smell the massive, breezy bakery at Ninina within a block of the restaurant, drawing you in for a delicious baked treat or lunch. The modern design of this coffee shop and bakery is perfect for remote workers, and you’ll see plenty of people with laptops alongside their coffee cups. I tried several baked treats here, including the whole wheat croissant and dulce de leche crumble bar, but the star of the show was the veggie burger. Stacked high with fresh vegetables cooked to a perfect still-crisp texture, this burger will keep you full and satisfied!

When New Orleans-to-BA transplant Liza Puglia is craving southern fried chicken, where did she go? Nowhere, until she opened NOLA, an traditional Cajun-New Orleans restaurant in Palermo Soho. The tiny spot only has seats for about 25 guests, but they are dishing out a simple and tasty set of Cajun classics. The menu offers staples like jambalaya and gumbo, but the star of the show is the chicken. Perfectly fried in a cast-iron skillet, don’t miss one of the fried chicken sandwiches – they are quite literally perfect.

For a more hipster ice cream experience, head to one of Rapa Nui’s locations around Buenos Aires. Part chocolatier, part creamery, Rapa Nui churns out creamy, delicious ice cream in all of the most decadent flavors. The texture is perfect and the flavors are rich, but damn if they aren’t yummmmmy. I loved the dulce de leche ice cream paired with the 80% dark chocolate – a perfect balance of sweet and bitter.

This tucked away gelato shop has been run by the same family for generations, pumping out gallons and gallons of delightful gelato. Offering standard and seasonal flavors, Scannapieco’s namesake comes from Scannapieco, a chocolate and orange ice cream famous in BA. The charming gelateria has family photos along the wall, and you can even purchase of tub of gelato to go. 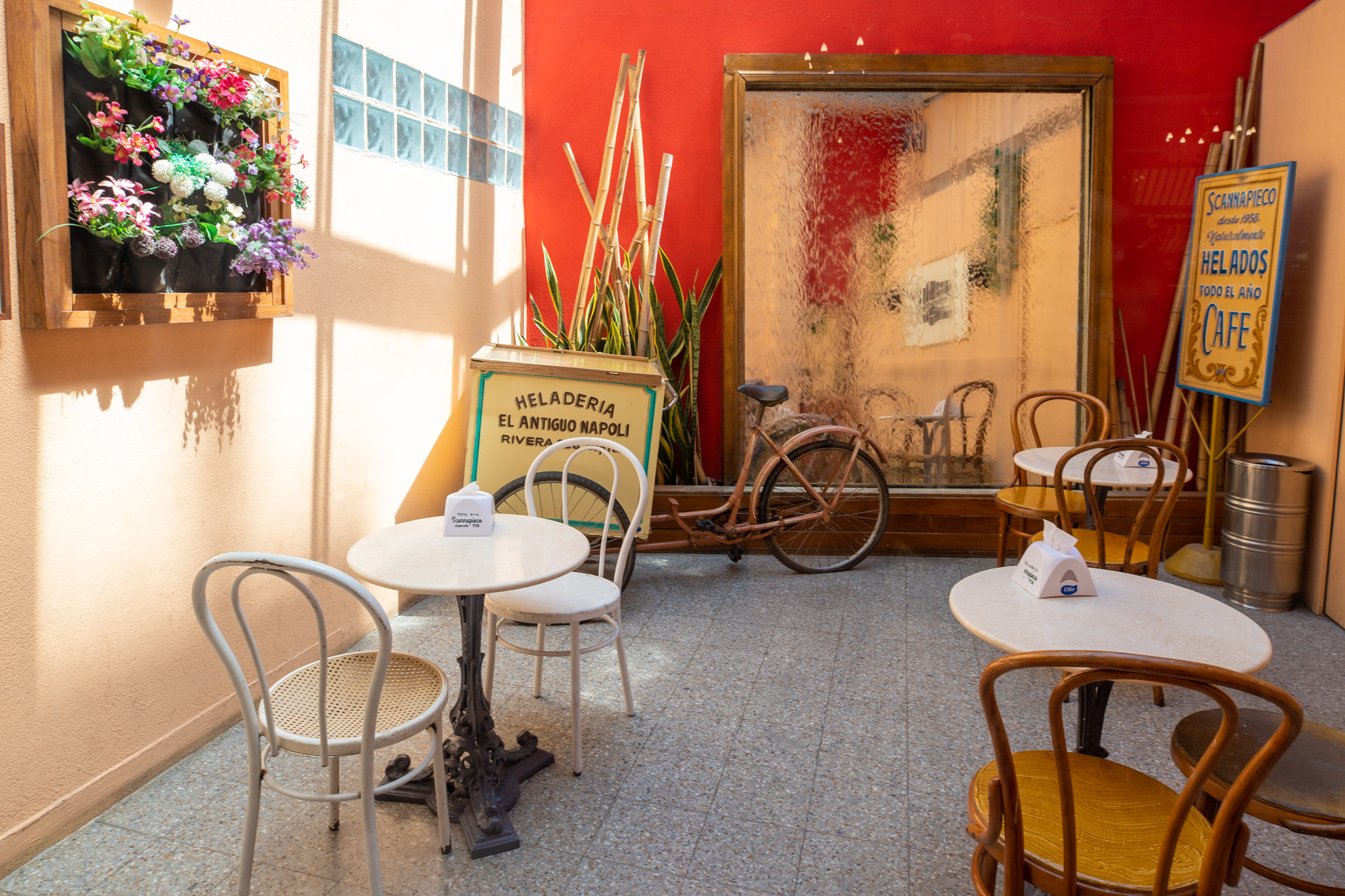 Did I miss any of your favorite Buenos Aires restaurants? Comment below with your suggestions! 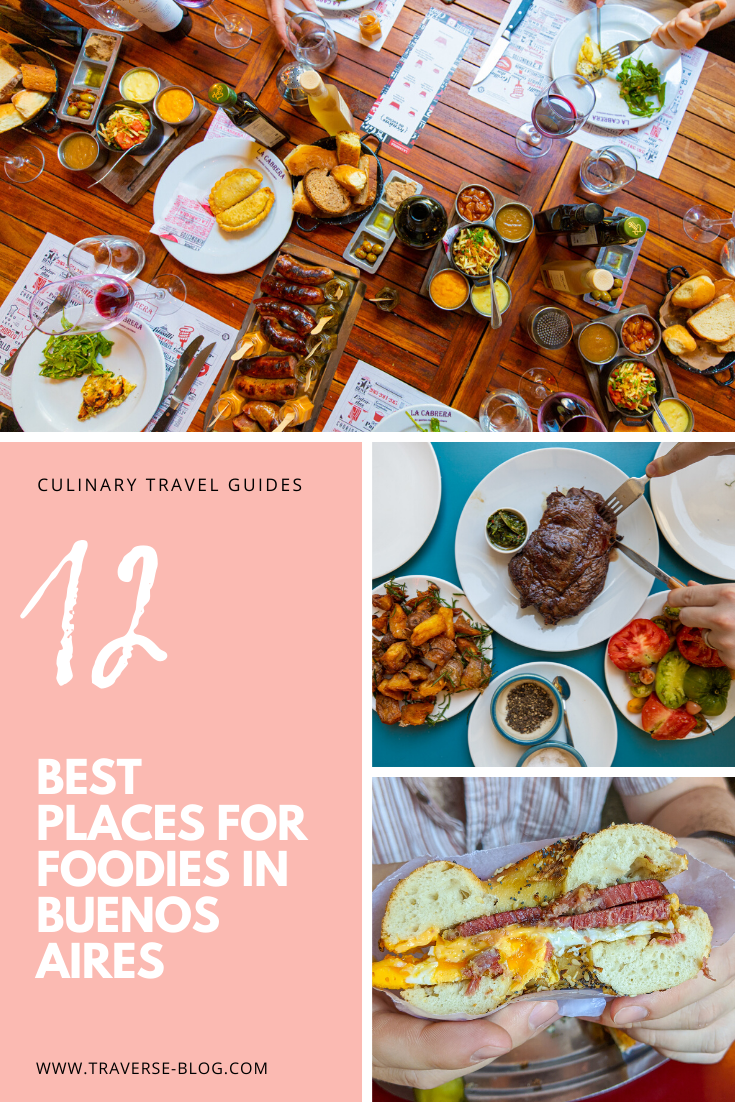