Surprising to many, Düsseldorf Germany has one of the largest Japanese diaspora populations in all of Europe. Some have even coined it “Tokyo on the Rhine”. You’ll notice neighborhoods like Japantown or Little Tokyo with shops and restaurants dedicated almost entirely to Japanese culture and food. It is also home to some of the best ramen I have ever eaten.

Cologne isn’t super diverse (or high quality) in its Asian food offerings, so anytime I am hankering for a hot bowl of ramen, I take the 40 minute train ride up to Dusseldorf. I have already visited Dusseldorf several times since moving to Germany in August, and I am so impressed by the quality of the ramen restaurants! Each time I visit, I try to eat at a new ramen shop so that I can sample from many different chefs.

This is the quintessential ramen guide for Dusseldorf, Germany! 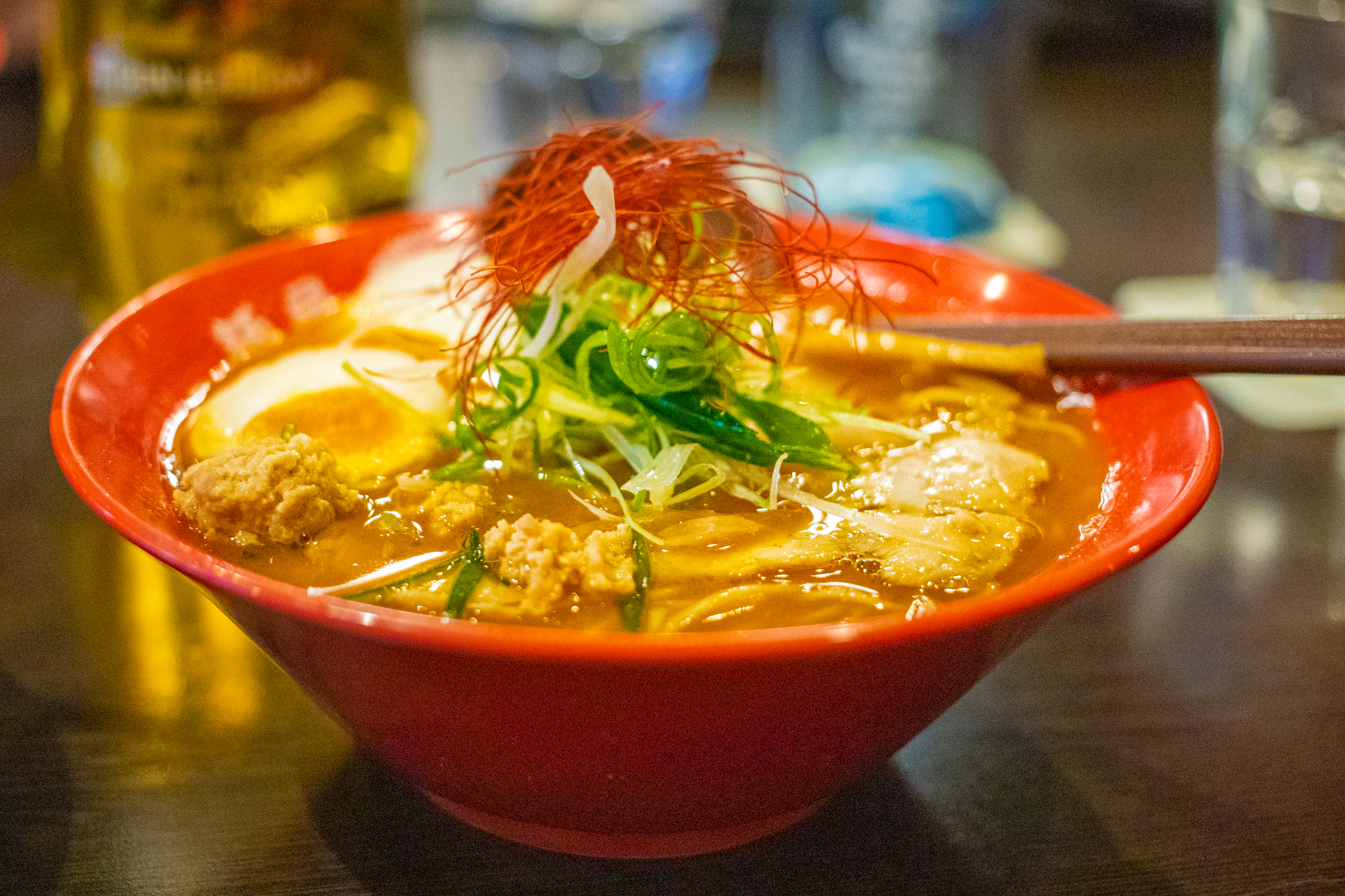 What You Need to Know About Ramen

For those readers who might not be familiar with the joy of eating ramen, let me give you a quick crash course because traditional Japanese ramen is SO much more than the little dried noodle packs you might be used to. In Japanese, ramen actually translates to noodles pulled into broth, and it is basically wheat noodles in a rich soup broth typically with a few other toppings. There are a lot of different varieties of ramen which I’ll talk more about below; but if you want to dive deeper into this amazing cuisine, Kobi Kitchen has a fantastic breakdown of all things ramen!

Ramen is widely consumed across Japan, typically in fast-casual restaurants at train stations or in tiny hole-in-the-wall locations. It isn’t usually seen as haute cuisine; instead ramen is something deeply comforting and personal to Japanese people. Most of the major cities have their own regional twist on ramen, but the ramen shops remain quite small, usually not seating more than 20-30 people at a time along a bar overlooking the kitchen. Because of the small size, it is customary for ramen shops to have lines or queues in front of the restaurant, a characteristic that is true for almost all the ramen shops in Dusseldorf.

When eating ramen, you will be served with chopsticks and a Chinese soup spoon. The first bite of ramen should always be a spoonful of the broth, because that is where all of the flavor lies. You want your tastebuds to be coated in broth and then you can eat the noodles. The broth will be served scorching hot, so eat your first few bites with caution. The last thing you want to do is burn your mouth before getting to enjoy your ramen! It is acceptable to slurp your ramen, and in Japan, it is often seen as a good sign that the soup is delicious.

At its core, ramen broth is pretty basic. It is typically pork bones, chicken bones or a combination of the two slow boiled in water over several hours to draw out the meat flavors. Once the base for the broth is ready, additional flavors can be added and this is where the unique magic of ramen really comes into play. Each chef and restaurant might have its own spin or combination on their broth styles that make it unique. There are 4 main flavors of ramen broth that you will find on ramen menus around the world, including in Düsseldorf:

Now comes the noodles. A majority of ramen shops that you see outside of Japan will have noodles that look similar to the ones you see in the grocery store packs, but about 87516192 times better. They are high alkaline eggless wheat noodles, which gives them a unique springiness and stable yellow color. The noodles can be served fresh, dried or aged. They will be the first thing added to the bowl and the broth will be poured over. 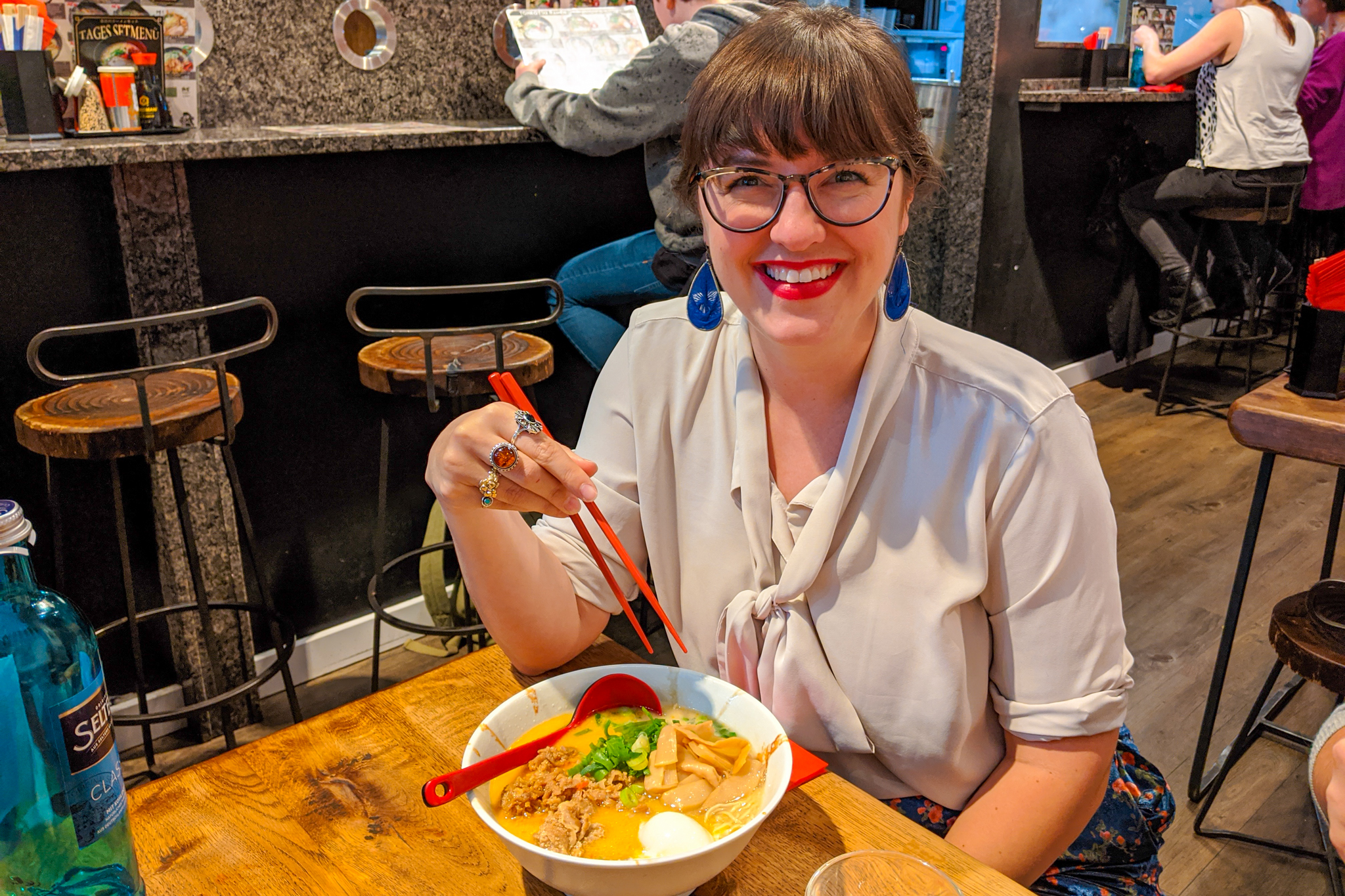 Once the noodles and broth are assembled, the meat will be added. Traditionally, thin sliced pork belly is the most common meat in ramen, but nowadays, you can find fried chicken, shredded pork, tofu, or even seafood in ramens. The texture and flavor of the meat is what separates a good ramen shop from a great one in my opinion. The pork should be tender and chewy, but not overcooked and tough. It also should have a flavor of its own. I often find mediocre ramen shops drop the ball here most commonly with bland, overcooked pork slices.

The final thing that every good bowl of ramen should have is a few extra toppings. Similar to the broth, this is where a ramen shop can distinguish its own identity depending on which unique combinations of toppings that will be added to a ramen. The most prevalent toppings are raw green onions, bamboo shoots and a soft-yolk egg. ALWAYS get your ramen with an egg — if it doesn’t come with it, add it in. I promise you won’t regret it. Other common toppings you’ll see include seaweed paper (Nori), corn, garlic, and sesame seeds.

Ramen is typically rich in flavor but not usually spicy. This is a common misconception! It will definitely be piping hot when it comes out, but typically not spicy. If you want a spicier ramen experience, you can usually request spice be added or they might even have a spicy variety on the menu. My favorite of all ramens is a spicy black garlic shoyu!

Where to Find the Best Ramen Restaurants in Dusseldorf

Arguably the most famous of the ramen shops in Dusseldorf, Takumi is the OG ramen restaurant in the city. It was opened by two brothers and specializes in Sapporo-style, a shoyu based ramen. The aged noodles are really the star of the show at Takumi. I had never eaten aged ramen noodles before, but they make a massive difference in the flavor. The noodles pack a punch and the texture is perfect. I personally thought the meat at Takumi was overcooked and I found the proportion of vegetable toppings too abundant, which distracts from the soup.

As the name would indicate, the speciality at this ramen shop is Tonkotsu-style ramen. Tonkatsu Takumi was opened by one of the brothers from Takumi just a few blocks away from the original location, and now the two shops have a bit of a rivalry. It is all in good fun, but there are visitors who are pretty loyal to one or the other. This ramen shop combines the amazing aged noodles of Takumi with slightly more modern flavors and toppings. I love the black garlic tonkotsu here because pretty much every component of the soup is perfect — delicious aged noodles, well-balanced toppings, and of course rich flavor! Don’t miss their perfectly fried gyoza — the little pillow dumplings are the best way to start your meal!

Where the two Takumi shops focus on specific styles of ramen, Naniwa offers a wide variety on their massive menu. You’ll find many different types of ramen (and other noodle dishes) at this restaurant, so this is the perfect place to try a style you haven’t had before. They also have more vegetarian or vegan varieties than the other ramen shops on this list. I love that Naniwa’s flavors are clean and distinct, so that you can really get a sense of what, for example, shio or miso ramens are about. 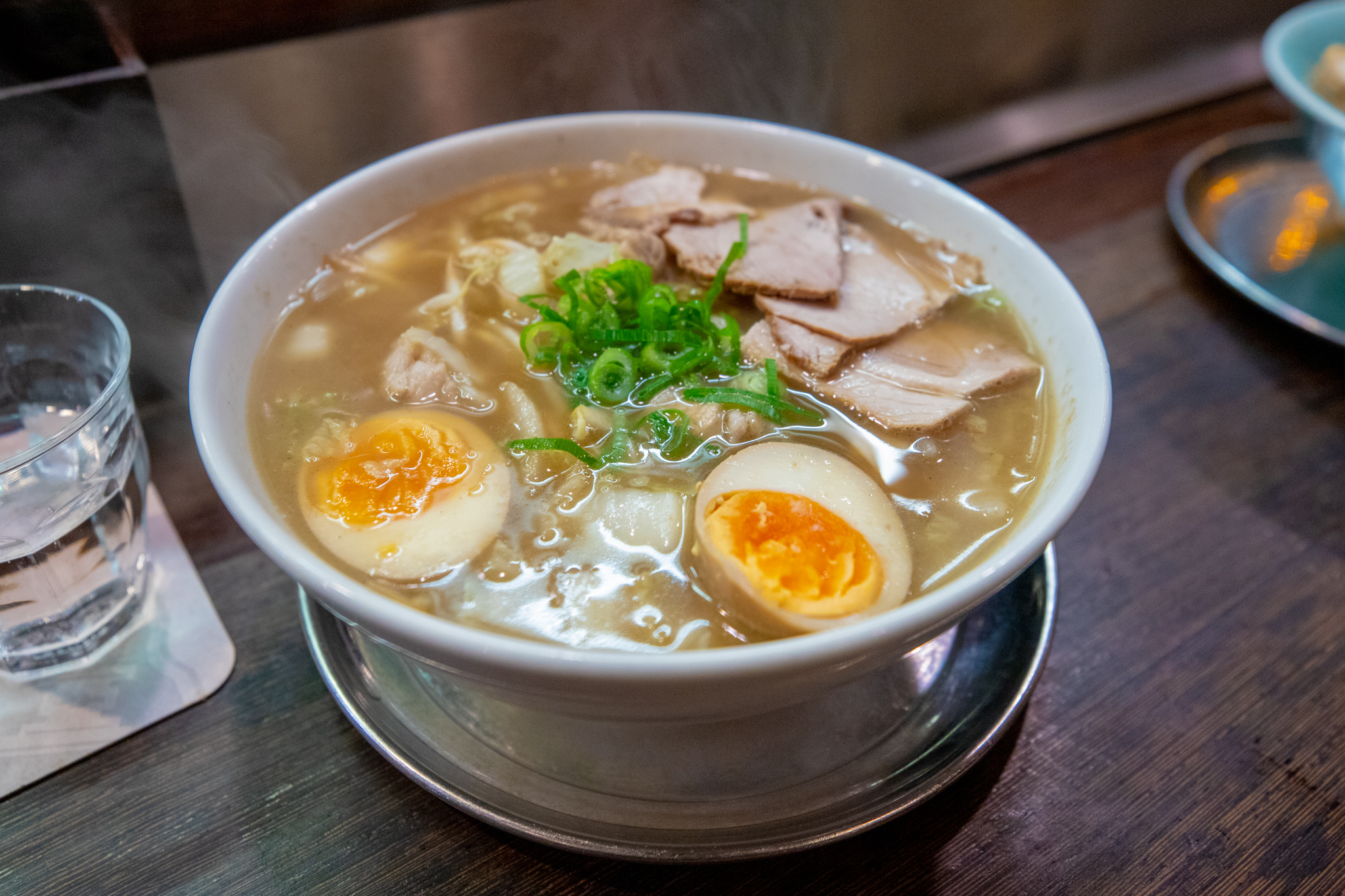 The specialty at Tokyo Ramen is chicken based broths and they CRUSH it. The portion sizes here are slightly smaller, but it doesn’t compromise the filling nature of a hot bowl of ramen. The toppings and noodles at Tokyo Ramen are simple and unassuming, which further highlights the incredible flavor of the rich chicken broth. It is meaty and full of umami flavor and truly delicious.

For a totally different type of ramen experience, try Takezo which is renowned for its TantanMen Ramen. This is a spicy Chinese version of ramen, which has been popularized around the world. I found that Takezo’s other ramens were a little bland and missing the finesse of flavors, but the TantanMen is genuinely delicious! It is perfectly spicy with the chili paste but then mellows out thanks to the rich flavors of fermented bean paste and pork belly. 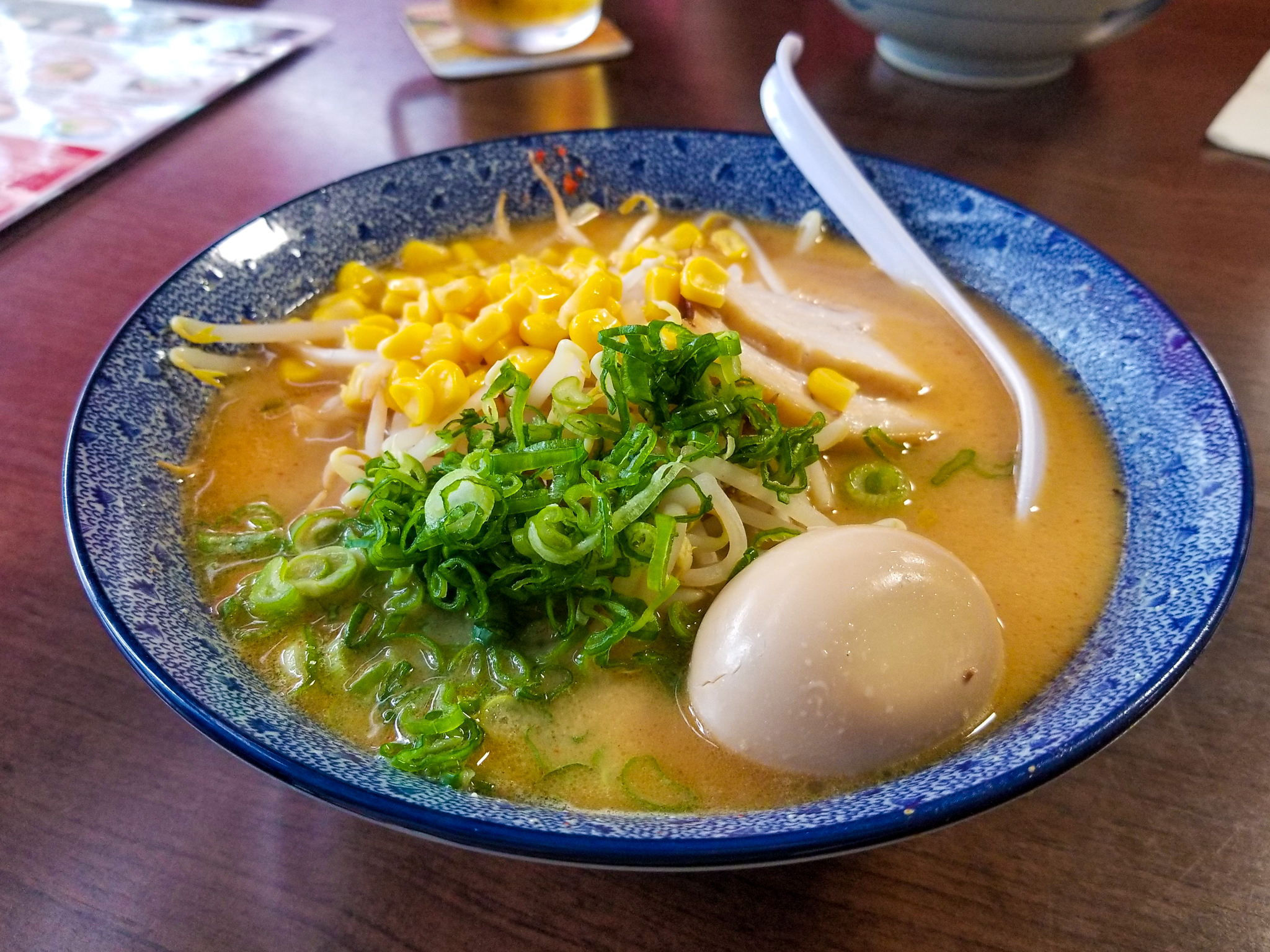 Do you have questions about finding the best ramen in Dusseldorf? Comment below!