Why Myanmar is the Next Major Culinary Destination in Asia

When I think back on my recent Semester at Sea voyage, there is one country where the food really stands out in my mind—Myanmar. It was such a delightful surprise and I think this is the next major culinary destination in Asia!

Perhaps the food in Myanmar was so memorable because I knew nothing about Burmese food prior to arriving in the country. Perhaps it was the unique mashup of some of my favorite cuisines into one that made me love it so much. Or perhaps it was my friend Chase’s excellent recommendations in Yangon that gave me a broad and delicious window into this cuisine.

Whatever it was, I am officially obsessed with the food of Myanmar and I think this should be the next major destination for culinary tourism!

Myanmar used to be called Burma, which was a name derived from the colonial times that refers to the largest ethnic group in Myanmar, the Bamar. Most people in Myanmar prefer the new name for their nation (Myanmar), but you will also hear Burma used interchangeably.

Myanmar is diverse nation filled with many different ethnic groups. Each of the states consists of a different ethnic minorities, creating a patchwork of traditions, cuisines and cultures around the country. It is common to hear something described as Burmese food or Burmese art, even if it is not specifically from that ethnic group.

Now that we’ve covered a bit of history, onto the food we go. Myanmar has only recently opened up to travelers and international investment, and there is a relatively small diaspora, which is why most foreigners are not exposed to this cuisine prior to arrival in Myanmar. It makes each meal a surprise and a delight as you experience flavors and ingredients you’ve never had before!

Myanmar is located between several major Asian nations, like China, India, and Thailand, putting it at a crossroads of culture and history. The food reflects that! The cuisine of Myanmar is a mixture of ingredients and styles of cooking from around Southeast Asia with a unique spin all of its own. You will find curries, you will find noodles, you will find chilies, you will find fried wontons, but they are likely to be a prepared differently than you’re used to.

The first dish you need to eat while traveling in Myanmar is fermented tea leaf salad. It is one of the most popular dishes in the country and Myanmar is one of the few places in the world that eats tea leaves instead of just using them for steeping in tea. The leaves are fermented to create a rich, strong flavor that is delightfully bitter and sour. They are typically tossed with a dressing, like a soy or peanut, as well as other ingredients like tomatoes, peanuts, and onions to mellow out the strong tea leaf flavor. The salad is served as a cold or room temperature salad typically eaten for lunch. It is YUMMY and the best one that I had while in Myanmar was at the Rangoon Tea House in Yangon.

The food in Myanmar can be mild but it can also be quite spicy. I ate the spiciest food of my entire life while in Myanmar—and LOVED it. I have a high spice tolerance to begin with, but this meal was next level. It was our dinner at Roots, a restaurant in Yangon that specializes in Wa cuisine. The Wa people are an ethnic minority that live in northern Myanmar with easy access to chiles from Thailand and China that make up their strong flavors. We ate a glass noodle soup with a tomato and chile broth that was super spicy, but so warming and delicious!

Another awesome and spicy dish to try in Myanmar is Shan noodle. Originating from the Shan state of Myanmar, this noodle dish is similar to a ramen, but the broth is served on the side. The noodles are a medium thickness wheat noodle and the sauce typically consists of peanuts and a strong acidic element such as tomato or lime as well as some spice like a chili. It is heart-warming and delicious, perfect for dinner. 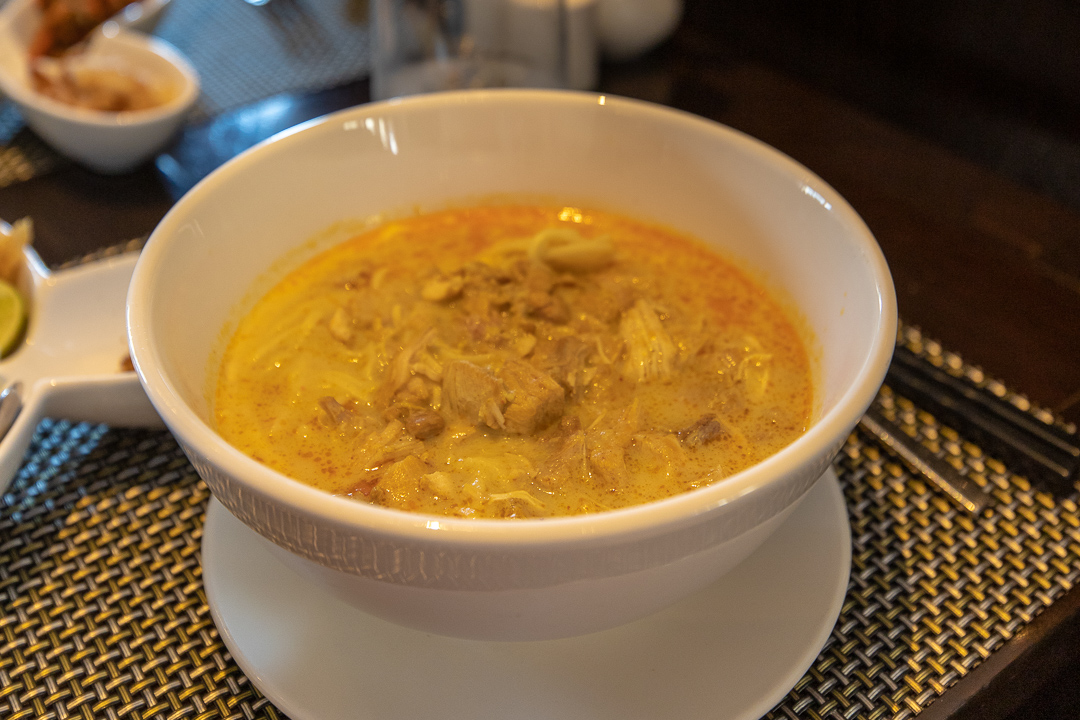 The curries in Myanmar tend to be more oily than those that you might find in India, but the flavor is also quite strong. The curry is usually served as a stand-alone dish and you can order noodles or rice to go with it, but it is not typically served with naan or roti. Fish curry was the one I saw most frequently, but there was also quite a bit of chicken and mutton curry too.

The national dish of Myanmar is called Mohinga, which is typically eaten for breakfast and you can find it easily at street stalls near public transportation areas. Essentially it is a soup made with fine, round rice noodles served in a fish-and shallot broth. You’ll find other ingredients in like an egg or veggies or lentil batter. My favorite Mohinga that I ate was at Burma Bistro in Yangon because the flavor of the broth was so rich!

As a foodie, it is not super often that a cuisine completely takes me by surprise; I’ve tried a lot of different foods in my short 30 years of life. The cuisine of Myanmar, however, was something completely unfamiliar to me. For that reason alone, I think it is an appealing foodie destination, but then you consider how deeply delicious and wonderful the food of Myanmar is, then it’s a no brainer— Myanmar needs to be your next culinary travel destination.

What country’s cuisine surprised you the most? Comment below with your favorite unexpected food memories!