How to Spend 2 Perfect Days in Havana, Cuba 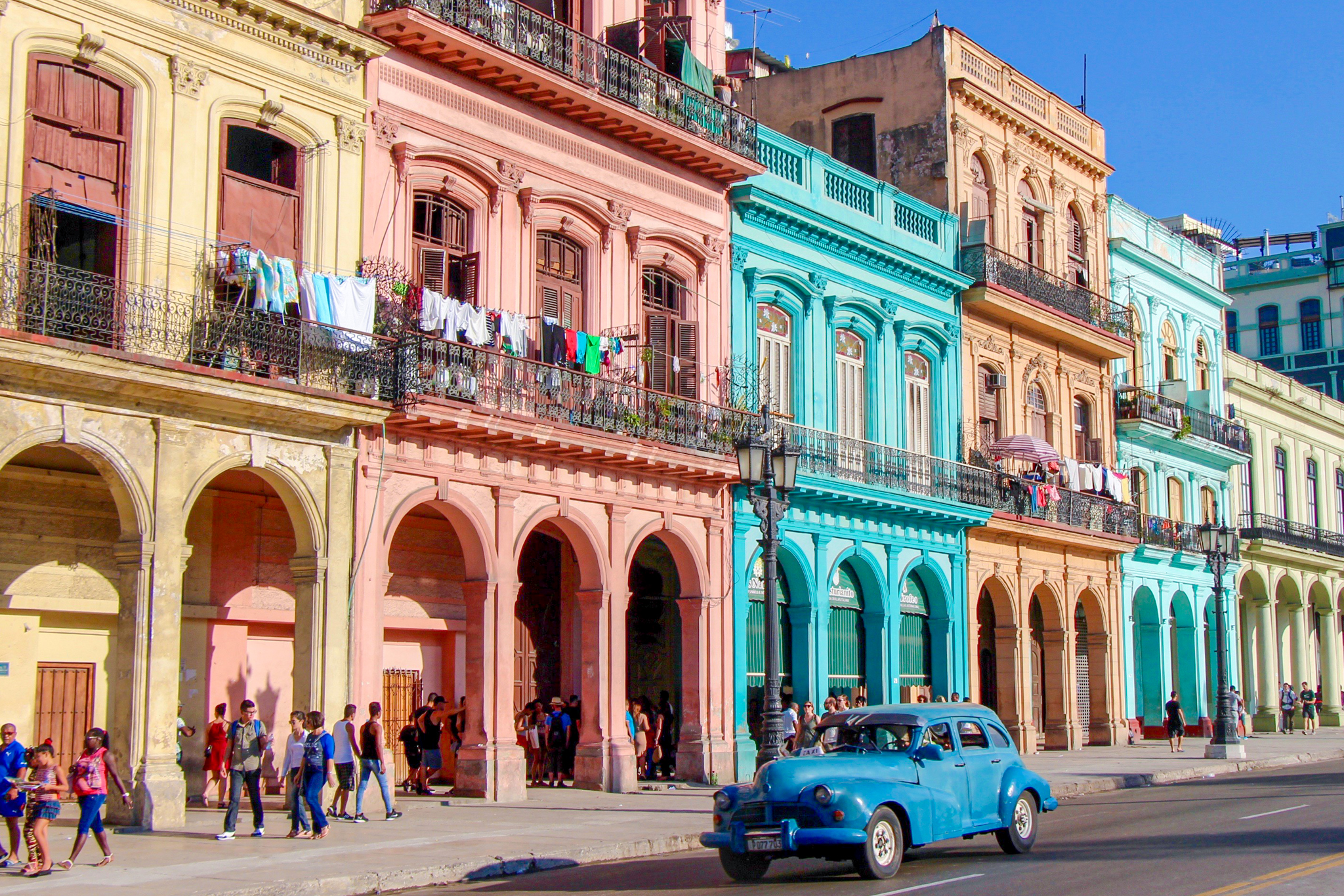 As you walk through the streets of old Havana, you can’t help but feel as though you’ve walked through a portal in time. Years of embargo and global isolation have preserved much of Havana as it was in its hay day of the 1950s. Between the decaying Art Deco architecture and vintage American cars, the charm of Cuba’s capital city is palpable. I was in love with it immediately.

Havana is one of the most well-known destinations in Cuba, and it will be the start of any foreigner’s visit to the Caribbean’s largest island. If you’re not sure how to legally travel to Cuba, one of my previous post talks all about it! As the heart of culture and history in Cuba, Havana makes for an excellent start to your adventures in Cuba. There is more than enough to fill 3-5 days in Havana, but you could reasonably explore the main attractions in 2 full days.

Here is how to spend 48 Hours in Havana, Cuba! 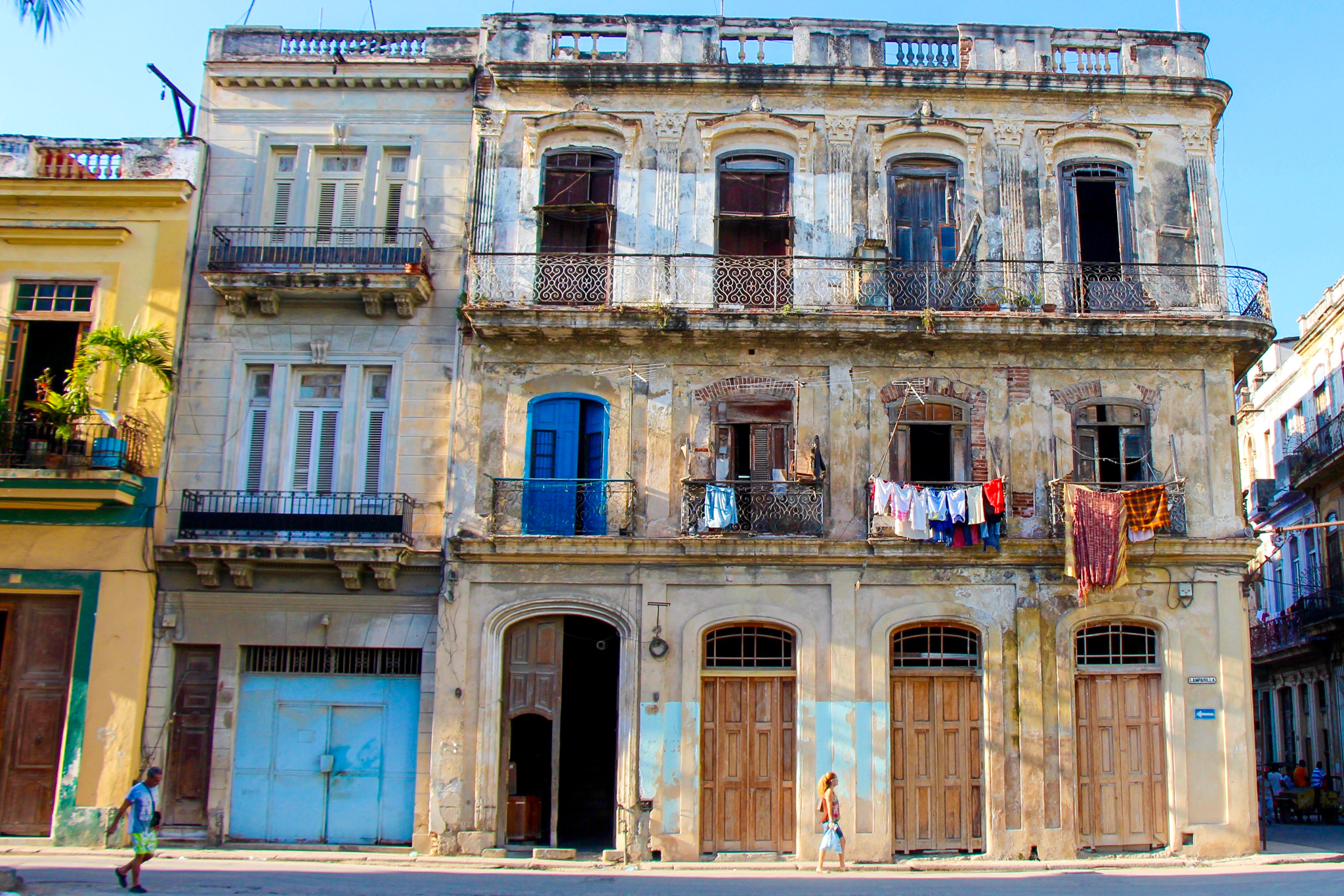 The history of Havana dates back several centuries and La Habana Vieja (Old Havana) is the main sightseeing center. This area is fairly small and easily walkable. You can hire a guide through one of the many available walking tour operators if you are interested in learning more about the sights, but it is possible to do on your own as well.

The Parque Central sits on Paseo Marti which functions as the dividing road between old and new Havana, a natural place to begin your walking tour. To start your walking tour, head kitty corner from the park where you’ll find Cuba’s capital building and Parque de la Fraternidad. During my visit the capital was under renovation, but it is still quite beautiful to look at. Just across from Parque Central is the Hotel Ingleterra and National Theatre, both of which have impressively ornate facades.

Continue on your walk by heading down Calle Muralla towards Old Havana. There isn’t a specific order in which you need to see the sights of Habana Vieja, but stops you won’t want to miss are:

While walking through Old Havana, try to appreciate the smaller sights too. You’ll notice men sitting in their stoops playing cards, laundry flapping in the wind from balconies above, and street carts selling the local newspaper. It is the most charming part of Havana and very picturesque, so keep your camera ready!

Afternoon: Walk or Ride on the Malecon

Perhaps the most iconic of Havana’s attractions is its oceanfront Malecon. This waterfront pedestrian esplanade and active roadway wrap their way 8km around the Havana’s downtown. You can ride from the Hotel Nacional all the way to the city’s main train station!

Havana’s Malecon offers a stunning drive, and a lively experience throughout the day. You will see Habaneros hanging out, fishing, listening to music or just enjoying some time outside.

I enjoyed walking most of the Malecon, but after your morning walking tour, your feet might be tired. If that is the case, you can also hire a vintage car to drive the full length of the Malecon! There are vintage cars that have been converted into convertibles, which is the best option for riding on the Malecon. This way, you can capture the full view as well as a few seriously ‘grammable moments! 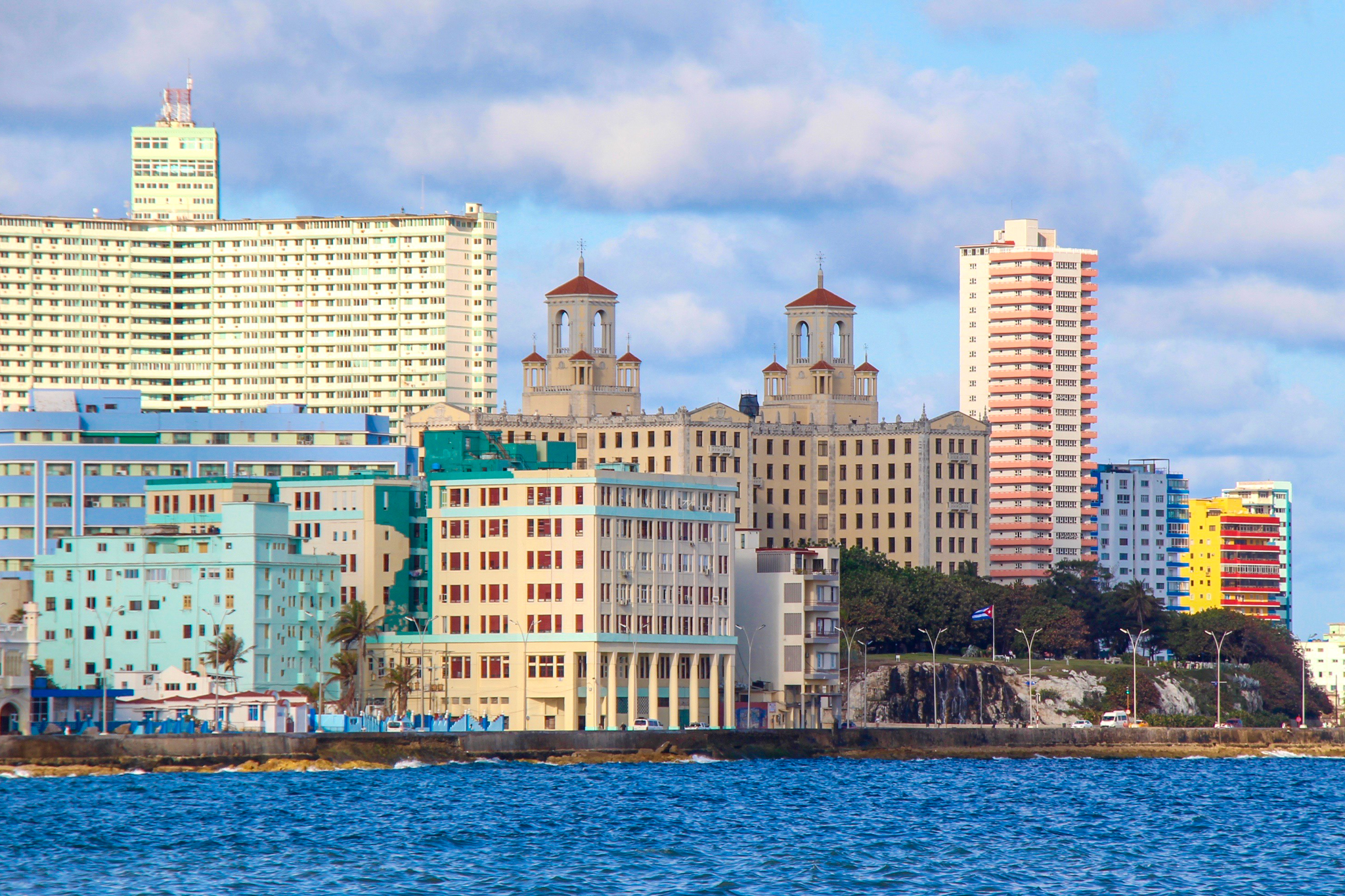 A strange but interesting vestige from it’s colonial heritage is Havana’s nightly cannon blast ceremony at the San Carlos Fort. At 9pm on the restored ruins of the massive fort there is a staged performance of a cannon blast, complete with colonial uniforms, musket guns, and yes, a cannon. The ceremony is held across the bay from downtown Havana, so I would recommend organizing your transportation ahead of time. You’ll also want to arrive a bit early since there is usually a crowd.

Packed with Cubans and visitors alike the grounds of the fort turn into a lively scene leading up to the blast. There are street food vendors, souvenir shops and roadside drink stands. Then around 8:30 the ceremony begins as colonial uniform clad soldiers march their way through the cobblestone streets of the fort.

They make their way to the corner of the fort and perform an elaborate ceremony. You can tell it is not just a tourist event because all the locals get out their phones to film the big moment when the cannon goes off. As you can expect, it is incredibly loud. You can hear it all the way back in Havana!

Start off your morning with a visit to Cuba’s famous national museum, the Museo de Revolucion. The line can get pretty long over the course of the day, so it is best to start your day here. The museum covers Cuban history largely from 1959 to present day. I found the alternative perspective on Cuban history presented by this museum absolutely fascinating. There is a lot to be learned and questioned from a visit to this museum, making me rethink many of the assumptions I had made about Cuba prior to my visit. Don’t miss a peek at the Hall of Cretans featuring several US presidents.

Next, make your way over to Revolution Plaza, the national monument for Fidel’s 1959 revolution.The towering central monument of the square is dedicated to Jose Marti, but you will also notice reliefs of Che Guevara and Camilo Cienfuegos, both of whom were heroes of the Cuban revolution. This massive plaza is the sight of many Fidel Castro speeches and is almost entirely left open, increasing the heroic impact of the sparse monuments.

Equally historic but far more a relaxing, a visit to the Hotel Nacional is a must-do on any itinerary for Havana. This hotel is famous for hosting heads of state and celebrities from all around the world, and now it is one of the most prestigious hotels on the island. Its privileged location in the middle of the Malecon offers stunning views of central Havana. You can’t walk through the entire hotel unless you are a guest, but you can enjoy the lawn, bar and pool. Their poolside mojitos are the stuff of dreams!

Located about 20 minutes west the Havana city center, Fusterlandia is a fascinating art community that is completely different than any other part of Havana. It was one of my favorite things we visited in Cuba and I highly recommend squeezing it into your itinerary. Reminiscent of the dreamy and futuristic designs by Antonio Guadi at Parque Guell in Barcelona, Fusterlandia is the brainchild of inventive Cuban artist Jose Fuster. 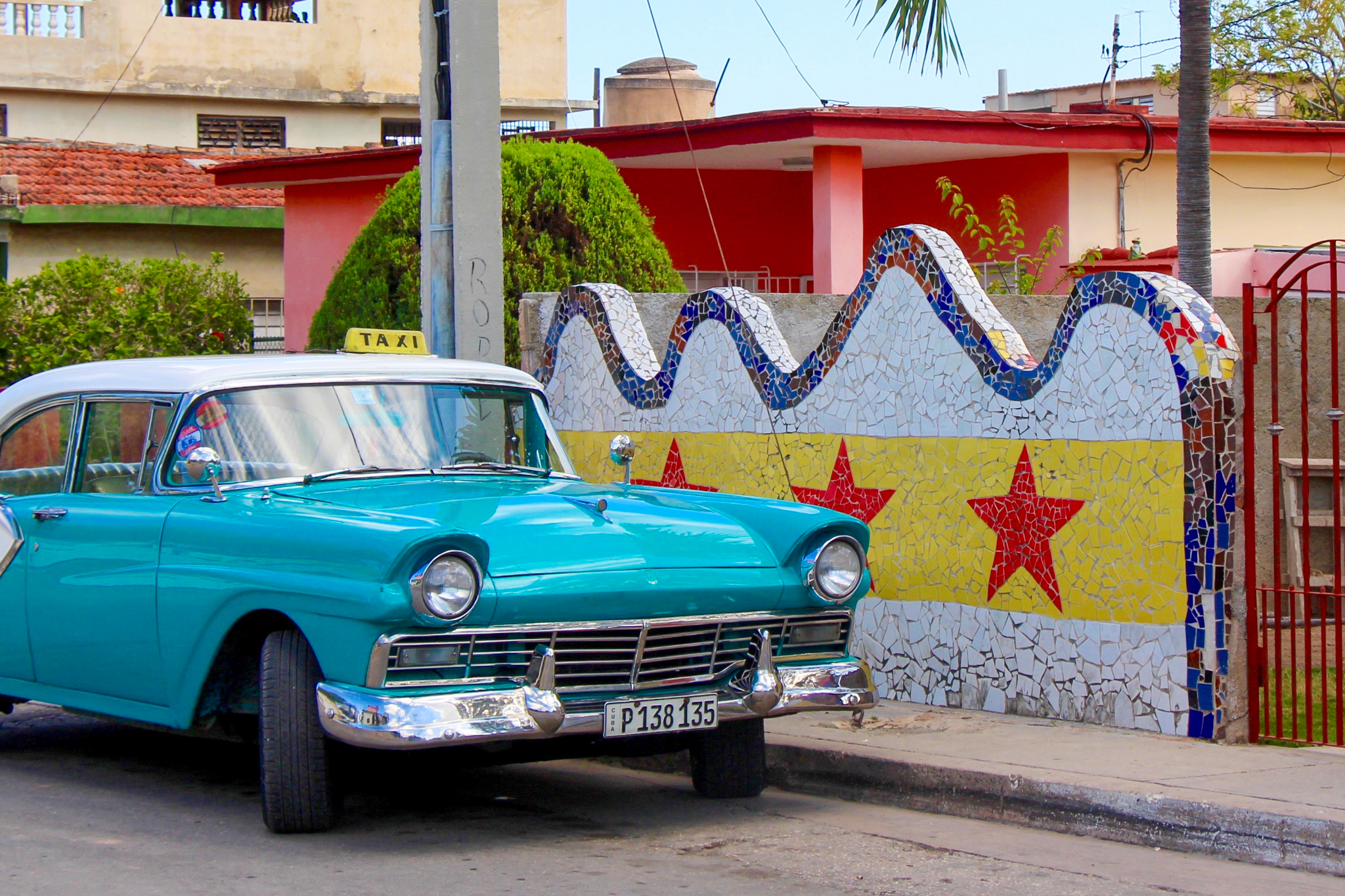 Fuster moved into the Jaimanitas neighborhood in the 1970s and was inspired to turn his house into a colorful mosaic tile masterpiece. Once he completed his home, he started asking neighbors if he could decorate their homes. A few agreed and his mosaic work grew into a neighborhood affair.

Fuster’s work helped develop this formally impoverished neighborhood into a thriving artist collective. Cuban artists from around the country come here for inspiration. Fuster’s home is the main destination, but you can wander through the narrow streets surrounding it to see how the designs have spread. The colorful and whimsical designs are incredibly creative with endless places where you’ll want to snap a picture! Plan to spend at least an hour or two exploring this fascinating neighborhood.

No trip to Havana would be complete with out a night on the town enjoying the robust nightlife! Havana is known to have one of the best culinary scene in Cuba so start off with a nice dinner, the quality of which might surprise you. Cubans aren’t the “go out to drink/get drunk” types, so nightlife is almost always paired with music and dancing. That’s the real star of the show when it comes to a night out in Havana, thanks to the teeming creative and musical talent that is the lifeblood of this dynamic city.

Vedado and Miramar are the most popular places to go out but there are options in most of the main neighborhoods. Salsa and jazz are common, but there are plenty of more hip places that have DJs and modern music. During my visit with Intrepid Travel, our guide gave a us a few dancing pointers but you can also take a lesson during your evening in Havana!

Havana is one of the most interesting and dynamic cities that I have ever visited. It is changing rapidly, so now is a great time to visit. I had long been fascinated by Cuba’s capital city, but it wasn’t until I visited that I truly understood how incredible Havana is. With this two day itinerary, you’ll see some of the best things that Havana has to offer! 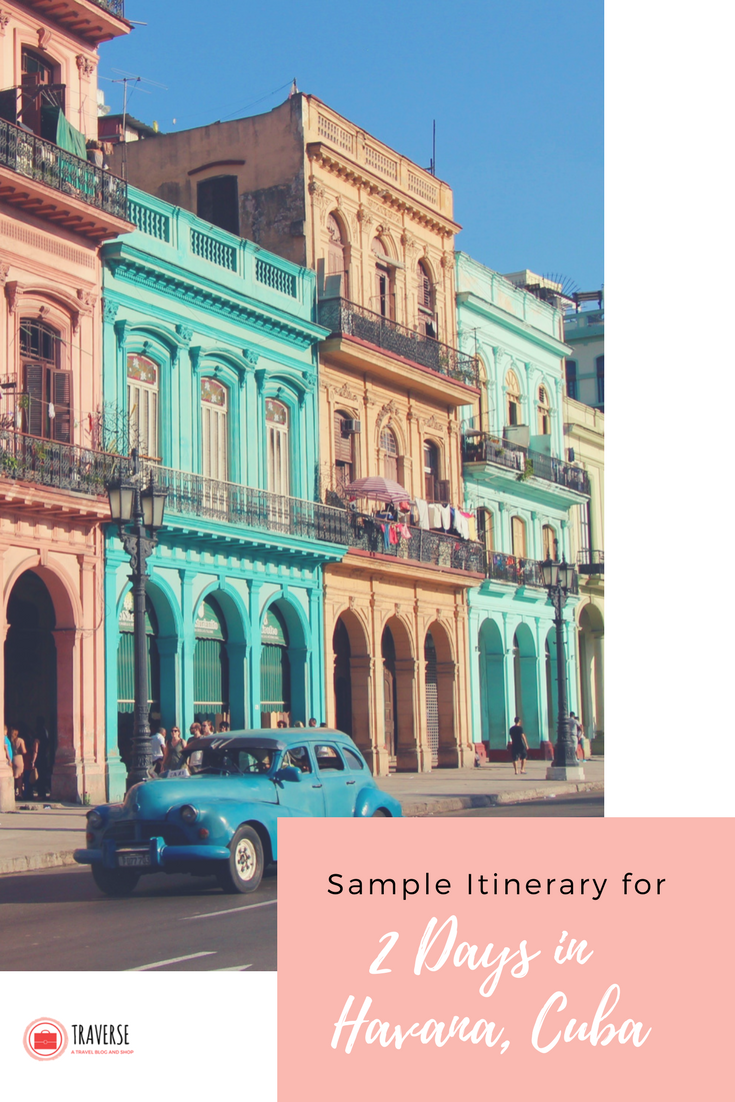