Croatia’s capital city of Zagreb is an off-the-beaten path destination that is often missed by tourists flocking to the coastal regions of Croatia like Split and Dubrovnik. After spending 24 hours in Zagreb, I think it is a mistake to miss this beautiful European capital city because it offers a unique contrast to coastal Croatia that is well-worth exploring.

Zagreb feels much more like a central European city that mixes the interesting Austro-Hungarian and Socialist histories of this country in a modern and beautiful city with plenty to explore in 24 hours. Offering smaller crowds and more intimate opportunities to explore, Zagreb is a great place to start or end any vacation in Croatia.

In this comprehensive travel guide to Zagreb Croatia, I will cover all the major sights to see in the city as well as need-to-know information about traveling in Zagreb.

Sights to See During a 24 Hour Visit Zagreb

I would recommend starting your day in Zagreb with a visit to the Mirogoj Cemetery, located about 15 minutes north of the city. I know it might seem like a weird suggestion to leave the city center if you only have 24 hours in Zagreb, but trust me this cemetery is worth the drive (see photos above). We came here on our way to the airport before leaving Zagreb, and that worked out well too.

Mirogoj Cemetery is a stunning open air park with neo-renaissance arches, ivy covered colonnades and beautiful tree lined walkways. Mirogoj is one of the most peaceful and alluring cemeteries I have ever been to. It is fascinating to watch Croatians of all religious beliefs come to visit and remember their relatives at this cemetery which is inclusive to all spiritual backgrounds.

Creating a horseshoe shape through the center of downtown Zagreb is Zrinjevac Park, a beautiful collection of squares and parks peppered with historic statues and museums. Dating back to the 19th century, a full walk around the park takes about 30 minutes and is called the Lenuci Horseshoe. The tree-lined walking paths are especially beautiful! During our visit in August, the park was lively and full of Croatians enjoying their lunch break outside in the sun. 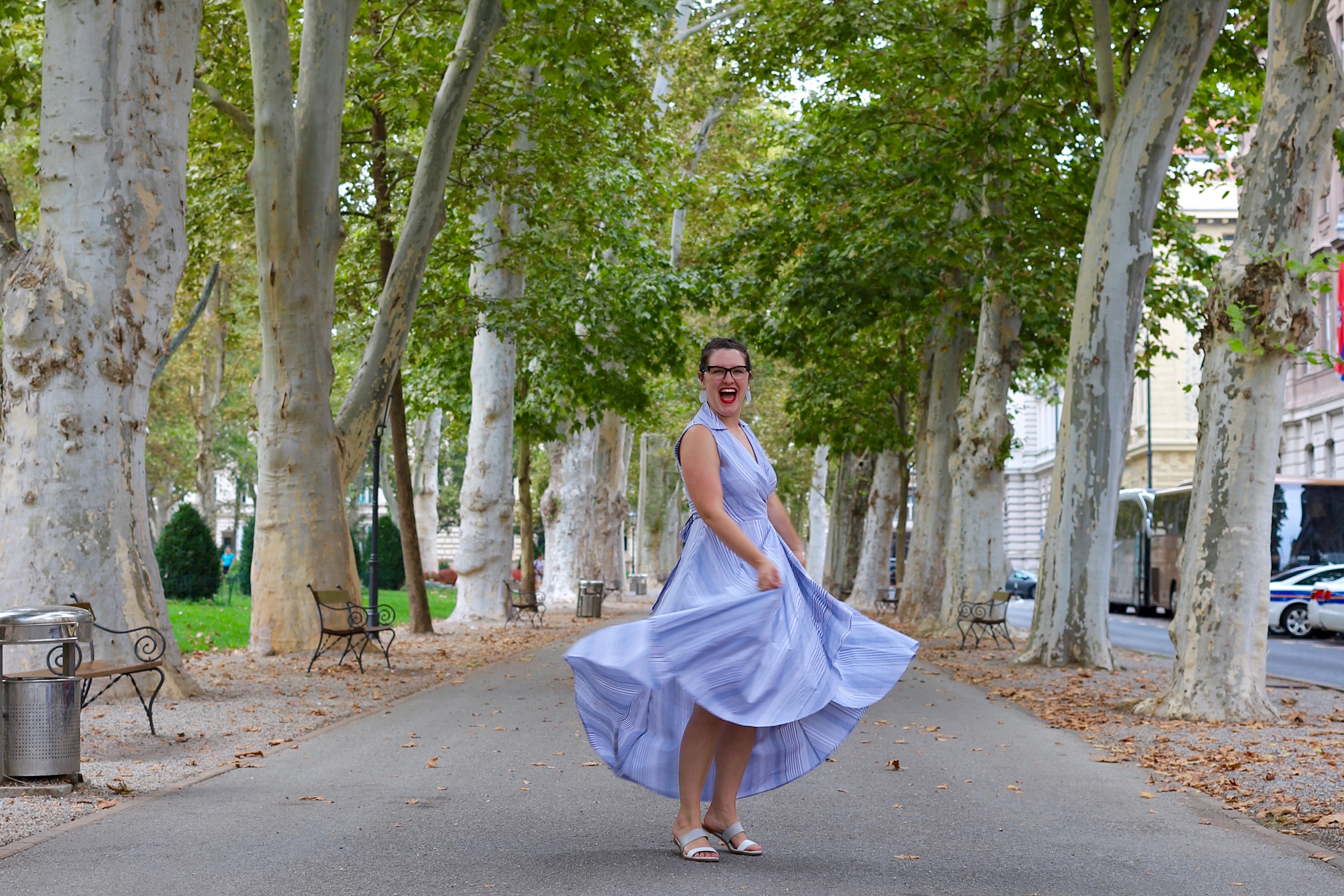 As a capital city, it should come as no surprise that Zagreb is full of fascinating museums, with over 3 million exhibits annually. From art and history museums, to more specialized museums like the Museum of Broken Relationships and the Technical Museum of Nikola Tesla, there are plenty of spots to explore for any type of traveler. Maybe the Museum of Illusion‘s ‘grammable exhibits might even pique your interest! Regardless of which museum strikes your fancy, it would be impossible to see all the museums in one day, so I would recommend choosing one or two to explore during your 24 hour visit in Zagreb.

As you head north on the Lenuci Horseshoe, you will be walking towards the main plaza of Zagreb, Ban Jelacic Central Square. Named after a 19th century Croatian hero who organized the country’s first elections, this bustling plaza dates back to the 18th century when it functioned as a toll collection point for travelers. Now, it serves as a popular transit stop on public transportation and meeting point for locals ready to spend a day in the city. The architecture around the square mixes several periods of Croatia’s history including the Austro-Hungarian and Soviet-era building styles. It’s central location serves as a great jumping off point for exploring the city by foot and we found ourselves passing through Ban Jelacic throughout the day. 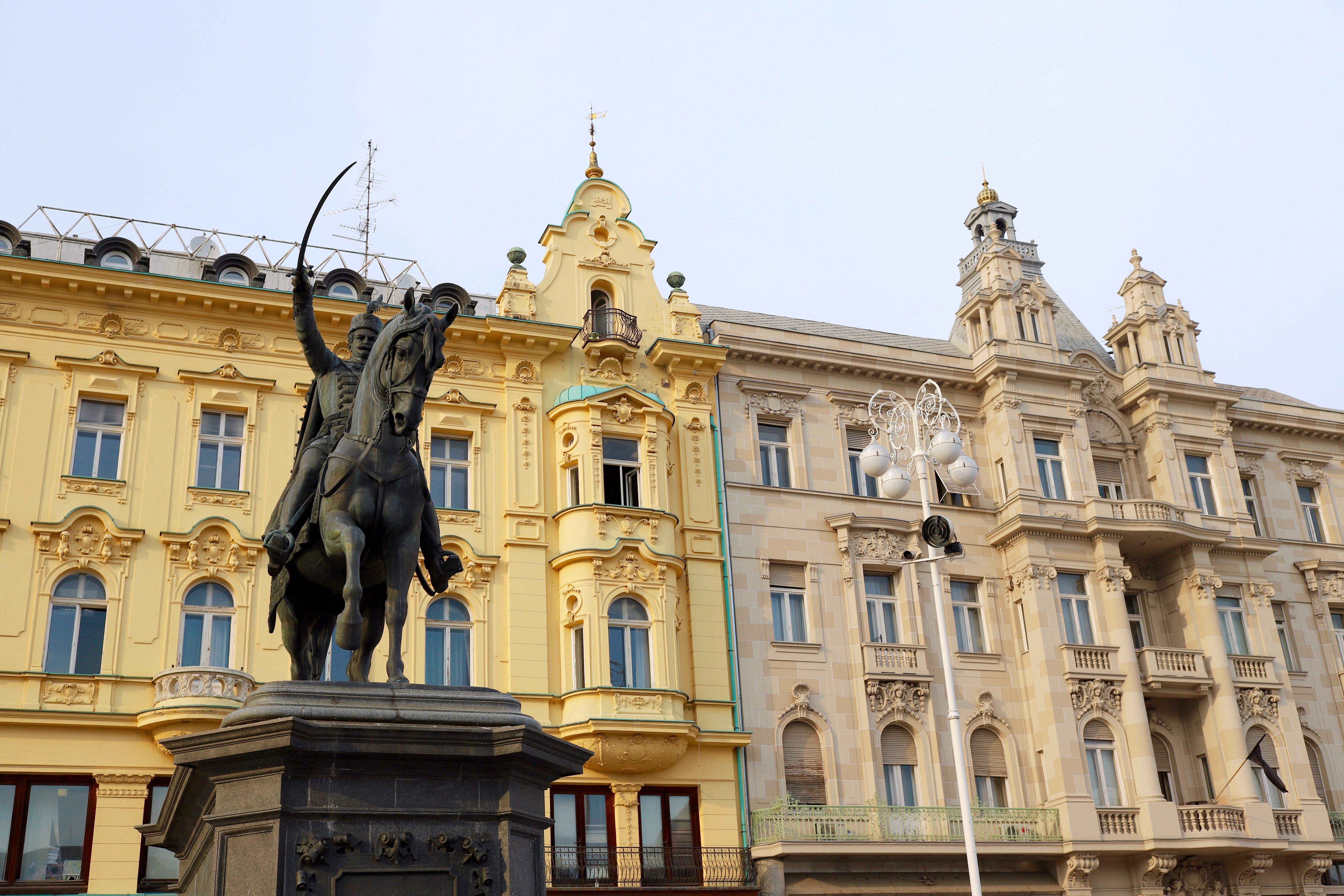 The Zagreb Cathedral is the tallest building in the city at 105 meters high and is the central point of the Upper Town portion of Zagreb. It was originally built in the 13th century but has seen lots of renovations and updates since then. It’s current neo-gothic look dates back to approximately the 19th century. During our visit, one of the two towers was under renovation as you can see in the photos, but it was still a lovely stop thanks to the beautiful interior.

Just a few blocks away from the cathedral is Dolac Market, a lively and colorful farmer’s market which is perfect for sampling local Croatian ingredients and cuisine. The adorable red umbrellas are endlessly picturesque! The market is open from about 8am to 3pm every day of the week and it definitely a place where locals and tourists can mingle. You’ll see lots of haggling over prices with regular customers!

The iconic St. Mark’s square is home to the Croatian government with the parliament and constitutional court both located here, but what really draws in visitors is the unique tiled roof of St. Mark’s Church in the center of the square. The roof depicts two different coat of arms—the one on the left represents the Triune Kingdom of Croatia, Slovenia and Dalmatia (which used to be unified under one rule in the 1800s when the tile was installed) and on the right represents the city of Zagreb. 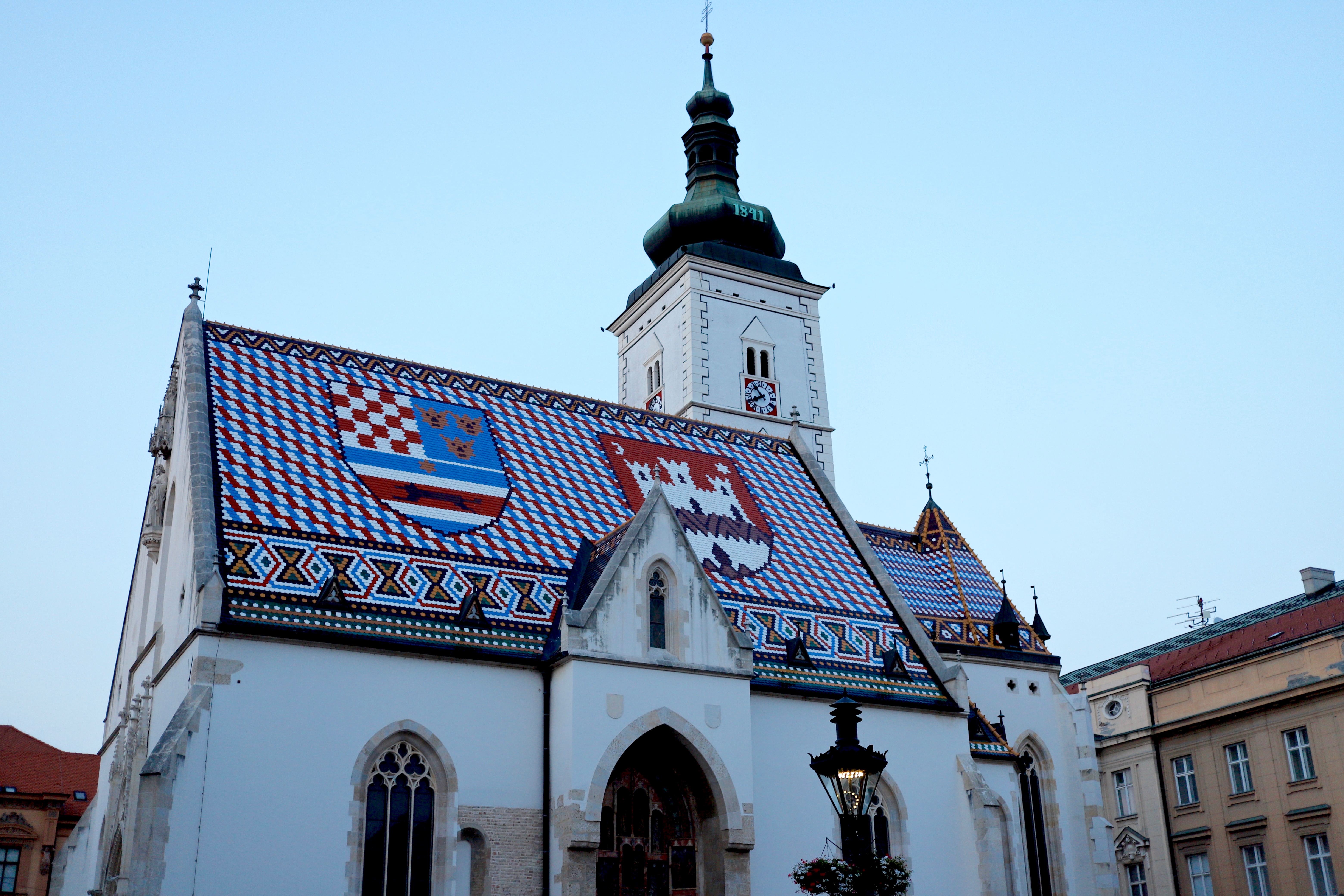 Just off the Ban Jelacic Square is one of Zagreb’s tallest buildings which offers sweeping views of the city on the 17th floor observation deck and bar. We opted to go up there for golden hour to watch the sunset dip below the horizon over the red tiled roofs of Zagreb’s buildings. It is an absolutely stunning view! Tickets for the 360 observation deck are about $10 and you can enter and exit as many times as you like in a 24 hour period. Apparently the bar gets pretty busy on weekends with DJ house music to accompany the view. In our case, we simply enjoyed the sunset and walked around the observation deck with a chilled glass of local Croatian wine.

One of the things that surprised me most about our trip to Croatia was the cuisine, and this was certainly true in Zagreb too. Croatian food has influences from Italian, Baltic and Austrian traditions which make it unique and interesting to enjoy. I particularly loved all the truffles, and I had THE most amazing truffle mushroom soup at Vinodol Restaurant in central Zagreb. We also loved our Michelin-recommended meal at Zinfandel’s Restaurant inside the Esplanade Hotel at the south end of Zrinjevac Park. 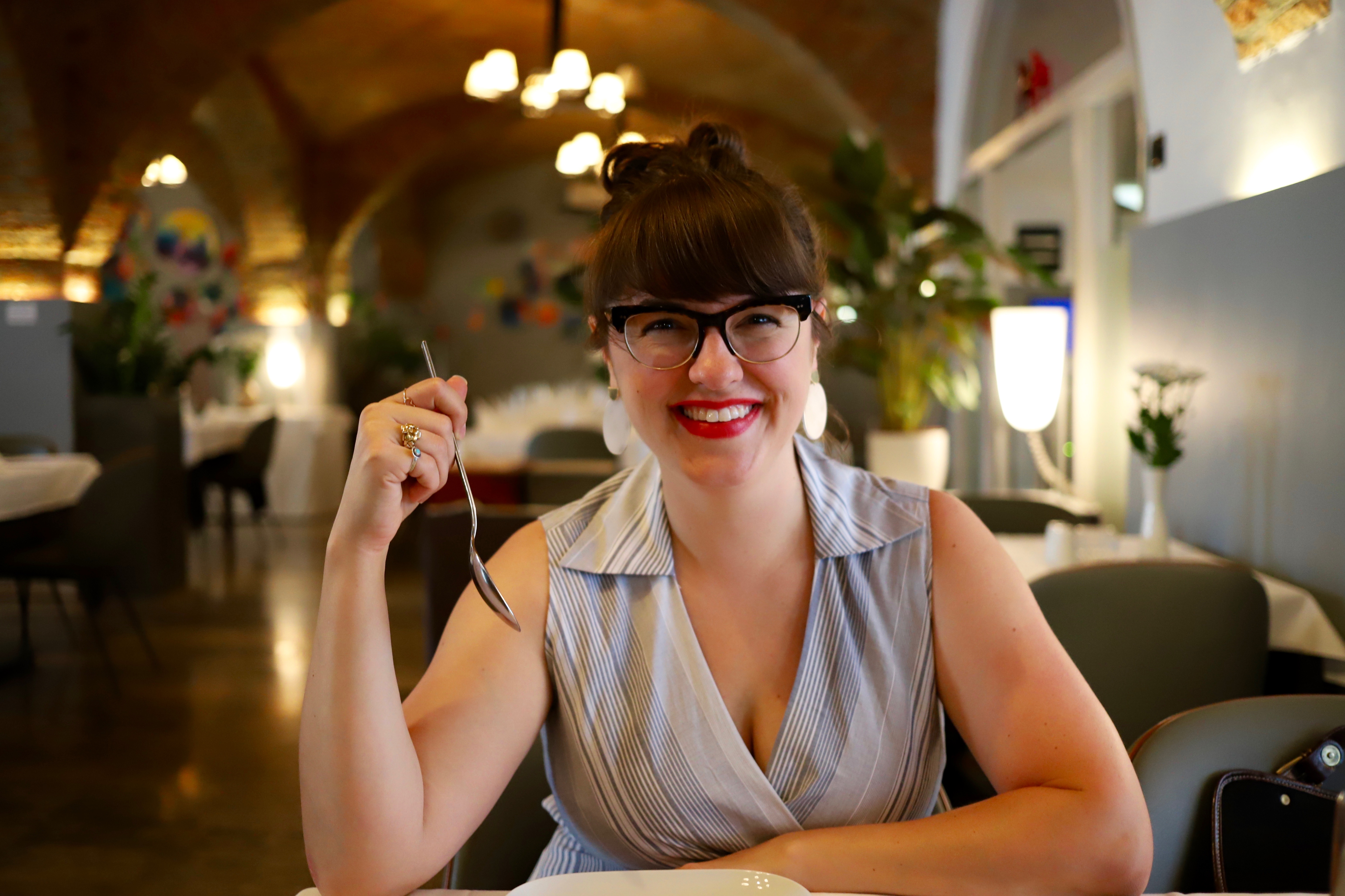 Everything You Need to Know About Traveling in Zagreb

All the sights on this list, with the exception of Mirogoj, are located in the upper and lower areas of central Zagreb and can easily be explored in a few hours on foot. However, there is also convenient, affordable and frequent public transportation options on the city trams and buses for those who prefer less walking. With one day pass options, you can easily hop on and off to see the various spots on this list!

Getting In and Out

Heading to some of Croatia’s beautiful islands after your 24 hours in Zagreb? The Zagreb airport (code ZAG) is located about 20 minutes outside of the city center. It is a brand-new airport with spacious check in and security areas. We found it was very easy to get through all of the flight logistics and only arrived to the airport about 1 hour before our domestic flight to Split. However, when you take an Uber here, make sure it sends you to the right location. We had an issue where we selected the airport from the drop down selections in the app and it actually sent us to the wrong side of the runway!

Uber is very widely available in Zagreb and super simple to use. Although we spent most of the time walking around, we used Uber to get to and from the airport as well as to and from Mirogoj Cemetery. It is pretty affordable too! 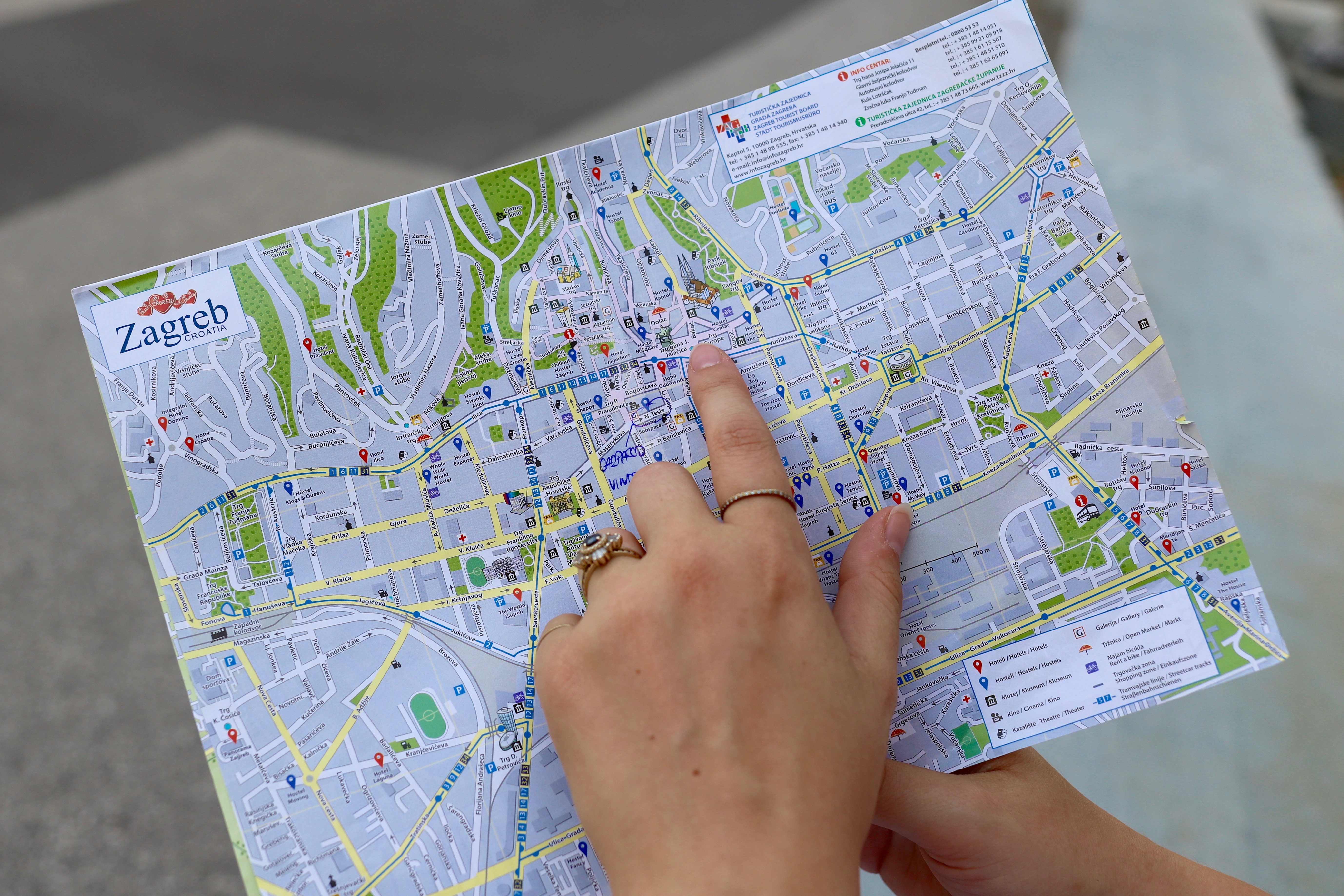 Croatia does NOT use the euro, so you will need to exchange cash when you arrive. However, a majority of places we visited accepted credit card and we did not actually need physical cash during our 24 hours in Zagreb, Croatia. Tipping and service are not included in restaurants here, but 10% is a reasonable rate to tip.

The weather in Zagreb can be quite different than the coastal cities of Croatia, thanks to its inland and higher altitude location. It tends to be less humid and warm, but it was quite comfortable during our visit in August. The variability between Zagreb and the coast is nothing that can be solved with an extra layer or two of clothing, such as a light sweater or jacket, and I used the same packing list for the rest of my trip to accommodate my needs in Zagreb. 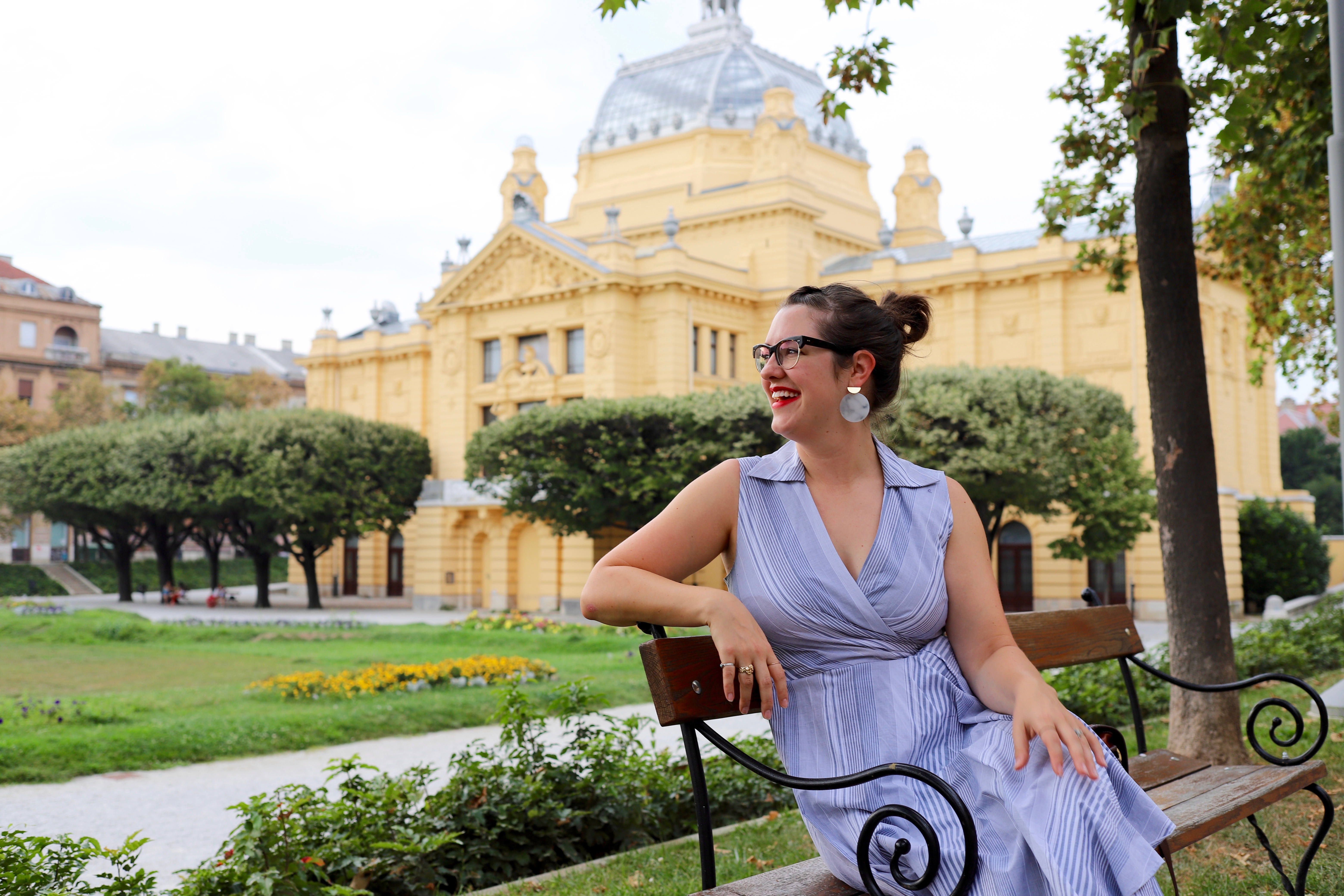 Ready to plan your day trip to Zagreb? Pin the image below so you can find all these 24 itinerary suggestions later! 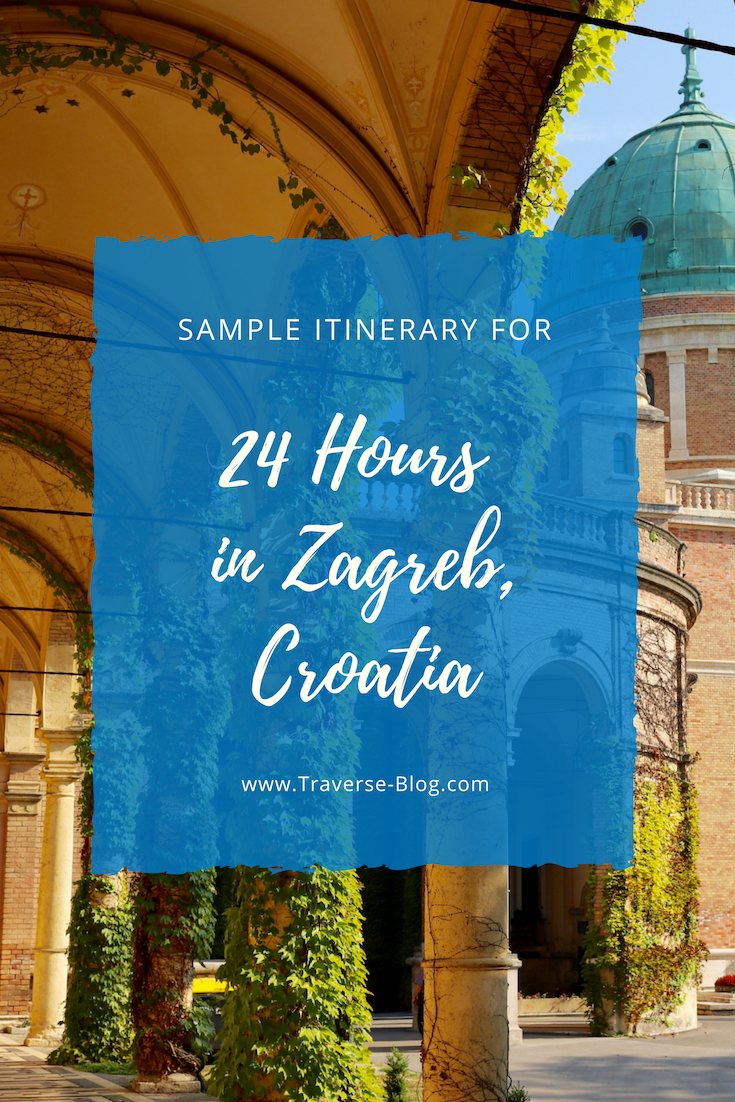